Sadler lines up his stable stars for Oaklawn stakes assignemnts 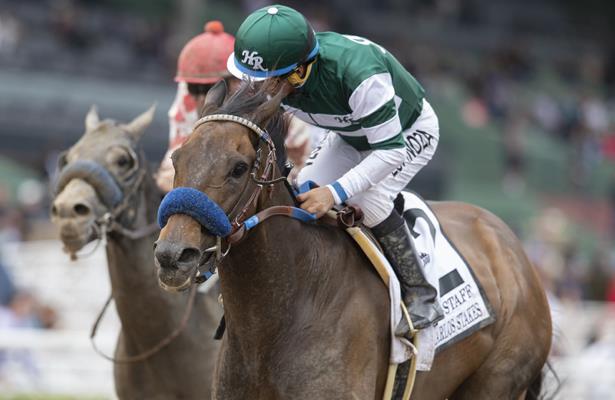 A trio of graded stakes winners will be shipping out of John Sadler’s Santa Anita Park barn in the coming weeks to take on top company at Oaklawn Park.

Sadler confirmed Grade 1 winner Ollie’s Candy is pointing for the April 18 Apple Blossom Handicap (G1) for older fillies and mares. On the undercard, he'll also have Flagstaff take aim at the Count Fleet Sprint Handicap (G3) for older horses.
Those two will run ahead of the May 2 Oaklawn Handicap (G2) expected to include Sadler's last-out winner of the Santa Anita Handicap (G1), Combatant.

Ollie’s Candy, a homebred for Paul and Karen Eggert originally raced out of the William “Billy” Morey barn in California. She made her debut as a 3-year-old for Morey in 2018, and became a graded stakes winner when taking Santa Anita’s Summertime Oaks (G2) in June of that year. After the barn change, Ollie's Candy ran seventh in Santa Anita’s Gamely Stakes (G1). Two months later, however, she provided the Eggerts with their first Grade 1 victory in the Clement Hirsch (G1) at Del Mar. Ollie’s Candy finished fourth in the 2019 Breeders’ Cup Distaff, then ran third to kick off her 2020 campaign in the March 14 Beholder Mile (G1). “We think the mile and an eighth will be a little better for her than a mile,” Sadler said. “...She’s a nice quality mare. She puts out an honest effort every time. She’s doing well. "She put out a bullet (work) here last weekend at Santa Anita. She’ll have one more work this weekend and then off to Oaklawn she’ll go with Flagstaff.” The 6-year-old gelding Flagstaff was a $475,000 purchase at the 2015 Fasig-Tipton Saratoga Selected Yearlings sale for owners Lane’s End and Hronis Racing. In 11 career starts, he has earned $403,785, winning five times (11:5-3-2). Flagstaff made his debut as a 4-year-old, breaking his maiden in his second career start. The son of Speightstown became a graded stakes winner in his most recent effort, the seven-furlong San Carlos Stakes (G2). The Count Fleet at Oaklawn Park is a six furlong sprint. As for Combatant, acquired by Sadler and Hronis Racing out of Keeneland's November sale, the $220,000 purchase made good on the price when following up a third in the San Pasqual (G2) by winning the Big 'Cap. Steve Asmussen formerly trained Combatant, a familiar name from the 2018 Kentucky Derby trail.