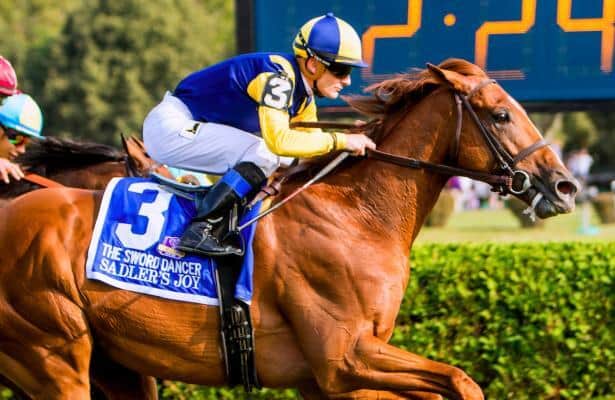 Sadler's Joy has twice finished in the money in the Grade 1 $400,000 Manhattan and will look to earn a trip to the winner's circle in the race's 119th edition on Saturday at Belmont Park.

Woodslane Farm's Sadler's Joy, a seven-time winner with a career bankroll in excess of $2.5 million, is part of an eight-horse field of 4-year-olds and up competing in the 1 1/4-mile contest on the inner turf in the Manhattan, which is part of a packed 11-race Independence Day card featuring five graded stakes on Runhappy Met Mile Day.

Slated as Race 10 at 6:20 p.m. Eastern, the Manhattan will feature live on America's Day at the Races, produced by NYRA in partnership with FOX Sports, and airing live on Fox Sports and MSG+. First post is 1:15 p.m.

Sadler's Joy has come tantalizing close to a Manhattan win for trainer Tom Albertrani, finishing a neck behind Spring Quality as part of a blanket finish in 2018. The year prior, the son of Kitten's Joy ran third, 1 1/2-lengths back to winner Ascend.

"I like the way he's coming into this race and he's run well in this race twice before, so with him, it's all about getting the right trip and hopefully he's up to it this year," Albertrani said. "We feel pretty confident he should do pretty well."

Sadler's Joy ended his 2019 year with a two-length win in the Grade 3 Red Smith in November at Aqueduct Racetrack and started his 7-year-old campaign against top-tier competition, running sixth in the Grade 1 Pegasus World Cup Turf in January at Gulfstream Park. Staying in the Sunshine State, he ran third in the Grade 2 Mac Diarmida at 1 3/8 miles in February at the same track.

Off a three-month layoff, Sadler's Joy returned to New York to run third in the 1 3/8-mile Tiller on June 4 at Belmont. He earned a 96 Beyer Speed Figure, marking 25 consecutive races he earned a number in excess of 90 dating to his sophomore year in 2016.

"I think the Tiller was a good race for him being off a few months leading up to it," Albertrani said. "I thought he ran well in there and came back sharper after the race. I think going forward, this one coming up, could be setting up quite nice for him."

Sadler's Joy has already banked more than $2.5 million in career earnings as he enters his 30th start. He has won at least one graded stakes his previous three years, starting with the 2017 Grade 2 Pan American at Gulfstream, the 2018 Grade 2 Mac Diarmida and last year's Red Smith.

"He's always right there. We've had a couple of troubled trips in the past, but he's a tough horse on the day and hopefully everything works out this weekend," Albertrani said. "We always felt he'd rather have firm turf, but he has run well of softer ground. We might get some rain, but I don't think it will make much of a difference."

Hall of Famer and two-time Manhattan winner Javier Castellano, aboard for Sadler's Joy's last four starts, will have the return call from post 4.

Two-time Grade 1-winner Channel Maker will return to the site of his most recent win, when he bested Arklow by a neck to win the Grade 1 Man o'War in May 2019. After earning a personal-best 105 Beyer Speed Figure for that effort, Hall of Fame conditioner Bill Mott ran him back in last year's Manhattan, where he ran a competitive fourth in a race that saw Chad Brown train the trifecta in Bricks and Mortar, Robert Bruce and Raging Bull.

Channel Maker has finished off the board in his last four races, starting with the Grade 1 Breeders' Cup Turf in November at Santa Anita, and is looking to bounce back off an eighth-place Tiller finish. The 6-year-old son of English Channel, who counts the 2018 Grade 1 Joe Hirsch Turf Classic at Belmont among a career highlight, has finished second in three career Grade 1 contests, including the 2017 Hollywood Derby, the 2018 Sword Dancer at Saratoga Race Course, and last year's Joe Hirsch Turf Classic.

Manny Franco will be in the irons from post 6.

Brown has won the Manhattan four of the last six runnings and entered a troika of contenders for his bid to repeat after Bricks and Mortar's triumph last year. In the Manhattan, the first-and-second place finishers of the Grade 2 Fort Marcy on June 4 at Belmont will be sent out again, with winner Instilled Regard and the French-bred Devamani separated by just a neck.

OXO Equine's Instilled Regard is a graded stakes winner on dirt and turf, parlaying a successful run on the 2018 Triple Crown trail into a successful career on grass. As a sophomore, the son of Arch won the Grade 3 Lecomte before running fourth in that year's Kentucky Derby.

Brown moved Instilled Regard to turf in late 2018, resulting in a third-place finish in his debut on the surface in the Grade 1 Hollywood Derby. Since then, the now 5-year-old has won twice on the turf, including the Grade 2 Ft. Lauderdale in December.

Irad Ortiz Jr. will guide Instilled Regard from post 1.

Devamani has run second in each of his two starts since Brown took over training responsibilities, finishing a nose behind Admiralty Pier in the Grade 3 Tampa Bay in February before running back in the Fort Marcy, where he registered a 102 Beyer.

Arriving in North America in 2018, Devamani made 12 starts before stepping up to stakes company. He will go for his first stakes win with Joel Rosario set to ride from post 5.

After a seven-month layoff, the Brown-trained Rockemperor has run twice since March, earning blacktype by finishing third in the Grade 3 Muniz Memorial Classic at Fair Grounds. He crossed the wire second in the Grade 2 Charles Whittingham in May at Santa Anita but was disqualified and placed third for causing interference last out.

Hall of Famer John Velazquez, a 2013 Manhattan winner aboard Point of Entry, will go for a second victory in the race, drawing post 2.

Terry Hamilton's Spooky Channel will take the step up in class and run in his first Grade 1, following a win against optional claimers in which he earned a personal-best 99 Beyer for the 1 1/16-mile route on May 23 at Churchill Downs.

Trainer Brian Lynch ran Spooky Channel in five straight graded stakes before that, saddling him to a victory in the 1 1/2-mile Grade 3 W.L. McKnight to start his 5-year-old year in January at Gulfstream.

Spooky Channel was shipped from his base in Churchill to Belmont on Wednesday, where Lynch said he will stay in Jimmy Jerkens' barn heading into the race.

"I was happy with the way he won that open allowance and I just felt we were prepared to roll the dice a little bit and see how he fits with this spot here in a Grade 1," Lynch said. "The mile and three-eights is pretty appealing. He's a big, hearty-type of horse. He takes it all in. He's on a plane this afternoon and hopefully he settles in."

Spooky Channel, 8-2-0 in 15 starts, will have the services of jockey Julien Leparoux from post 8.

Ten Strike Racing's Dot Matrix, who edged Sadler's Joy by a nose for second in the Tiller last month, will rematch his old rival. The Brad Cox trainee started his 7-year-old year with a win the 1 1/2-mile Grade 3 John B. Connally Turf Cup in January at Sam Houston, marking his first appearance since running third in the Red Smith, 1 1/2 lengths back to Sadler's Joy.

Dot Matrix is 1-1-1 in three career starts at longer than 1 1/8 miles. The Freud gelding is a veteran on the Belmont turf, compiling a 3-3-2 record in 14 starts.Florent Geroux, aboard for the Connally Turf Cup win, will make the trek to ride again, breaking from post 7.

Cross Border, owned by Three Diamonds Farm and trained by Mike Maker, will be looking for his first career stakes win. A son of English Channel, he was part of what Lynch said was a competitive McKnight field at Gulfstream, running second, just a neck behind Spooky Channel.

America's Day at the Races will offer live coverage of Belmont Park stakes action from 1 - 5 p.m. and from 6 - 7 p.m. on FS1. NBC will provide live coverage of the Runhappy Met Mile from 5 - 6 p.m.