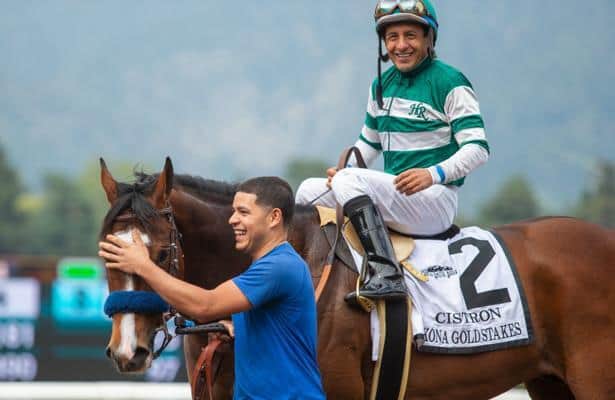 Cistron continued a stakes roll for the connections of trainer John Sadler and Hronis Racing, giving the conditioner a winner for the third straight weekend when Cistron rolled gate to wire Saturday in Santa Anita’s Grade 2, $200,000 Kona Gold.

Under come-backing jockey Victor Espinoza, Cistron, a 5-year-old by The Factor, made easy work of a compact field in Southern California. He went quickly, too, opening in 22.07 and 44.70 before gliding under the wire in a final time fo 1:16.33 for the 6 1/2 furlongs.

"John and I were just talking, like, I think he can bounce out of there, cruise on the front and get the money," Espinoza said.

Cistron and @VictorEspinoza lead every step of the way to take the Kona Gold Stakes at @santaanitapark for @johnwsadler. pic.twitter.com/4qwjx80fFK

The Kona Gold score was fitting given Espinoza’s bond with the connections. Sadler was the first trainer to put the Hall of Fame jockey on a horse to work in his lengthy return from injury.

All Out Blitz ran second with Dr. Dorr third.

Cistron has hit the board in the majority of his starts but rarely wins, with this his fourth victory in 25 career starts. Recently, he had been sprinting on the turf.

"We want to be flexible," Sadler said. "...He always works well on the dirt, and we thought this was a good time to try him back. We saw the field was coming up a little light, so we want to be creative with where we're entering, and it worked out."