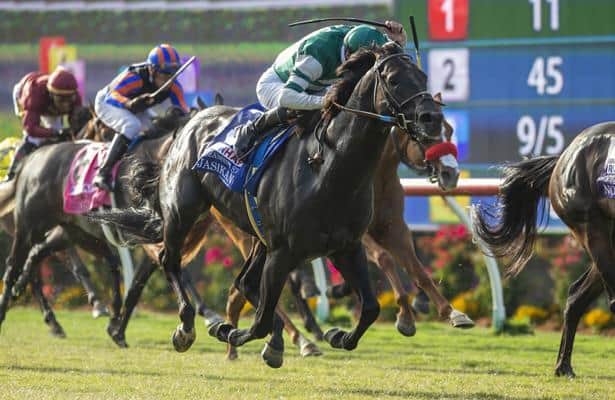 Irish-bred Jasikan, the 9-5 favorite in a field of 12 three-year-olds, rallied from last place to win the featured $117,357 Runhappy Oceanside Stakes on opening Wednesday of the 2019 Del Mar summer racing season.

Outrun in the early stages of the one-mile contest over the infield Jimmy Durante Turf Course, Jasikan responded to the urging of jockey Flavien Prat to nose out Nolde at the wire after a long, sustained run. Rijeka was third, a length and one-half farther back, with Golden Birthday fourth.

“I didn’t sleep too well last night because I set the bar really high last year," Sadler said. "A little nervous, Day One trepidation, but our other horses ran well today and this one got the job done as the favorite, so we’re delighted.

"He actually broke better today. His last race he broke really slow, today he broke regular slow. He’s just not a horse that’s very good from the gate, but he’s got a lovely turn of foot and as you saw he looped the field and came from way back.

"It feels great to be back here at Del Mar. I’ve been coming here for a lot of years (this is his 41st season at Del Mar) and it’s a very good feeling. The place is beautiful and the weather’s great.”

Nolde, who took the lead entering the stretch under jockey Victor Espinoza only to be nosed out at the finish, paid $5 and $3.80, while Rijeka returned $6.60.

Jasikan provided Prat with his second win of the afternoon, the rider also taking the second race aboard United at $5.60. He made it a triple in the day’s tenth race finale, winning with Give Me The Lute at $7.20. Doubling Wednesday was Rafael Bejarano, scoring on Julius in the first at $3.60 and Facts Matter, $7.80, in the fourth.