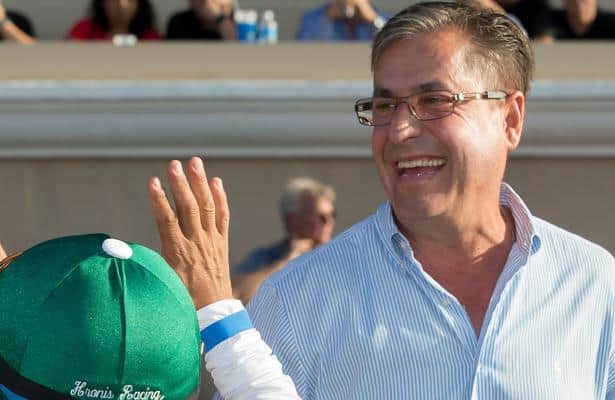 Accelerate, Catalina Cruiser and Catapult, all out of the John Sadler stable, accounted for four of the nine divisional champions of the 2018 Del Mar summer meeting. Accelerate was voted Horse of the Meeting and Top Older Horse, while Catalina Cruiser took the Sprint division and Catapult Top Grass Horse.

The trio’s combined five stakes wins contributed mightily to the more than $1.2 million in earnings at the meeting for the Hronis Racing stable of brothers Kosta and Pete Hronis. Hronis Racing sat atop the ownership standings for the second year in a row and the fourth time overall at Del Mar.

Only Accelerate, retired to stud after an Eclipse Award season climaxed with a win in the Breeders’ Cup Classic, is gone from Sadler’s standout group of a year ago. And Hronis Racing looks as strong as ever with one newcomer, Jasikan, the morning line favorite for Wednesday’s traditional opening day feature, the $100,000 Runhappy Oceanside Stakes.

So things are looking up for Sadler, with one exception. When he looks out the door of his office and down the shedrow, he does not see horses conditioned by Hall of Fame trainer Jerry Hollendorfer at the far end of the building.

“There’s a big sadness for me coming here this year with what happened to Hollendorfer,” Sadler said, carefully and measuredly, Tuesday morning, his first day on site. “He’s been my friend and neighbor at the end of the stalls for quite a few years here, so it’s a little depressing. But as far as the horses go, it’s looking good, we’re expecting to have a nice week and we’re going to load right up this weekend.”

Catalina Cruiser is scheduled to defend his title in Saturday’s Grade 2, $200,000 San Diego Handicap, while Catapult will come back with a title defense in Sunday’s Grade 2, $250,000 Eddie Read Stakes.

“Off to a strong start, I hope,” Sadler said. “I never look from year to year, I’ve been so consistent down here for so long. But you never know what’s going to happen. Hopefully we’ll get some breaks and have some luck.”

Sadler has four entered in the opening day program, including Jasikan. The Irish-bred colt was purchased following a maiden-breaking win in November while making his second career start in his native country.

“He looks like a nice prospect,” Sadler said. “He was a very good third in a stake first out for us, then he won an allowance race very impressively in his next out. The mile (of the Oceanside) should be a very good distance for him.”