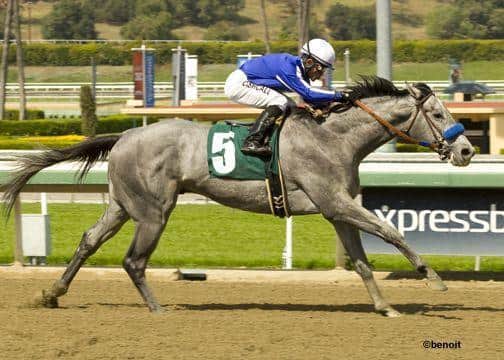 The Craig Stables and Donkey Island Racing’s Holy Candy is the only entrant among 13 for Saturday’s 88th running of the $750,000 Toyota Blue Grass (G1) to enter the race off a maiden victory.

It is a move that trainer John Sadler does not often make, especially when the move requires shipping across country from his Southern California base.

“It is not something I do every day,” Sadler said. “I did it with Line of David a couple of years ago. He had won two and I took him to Arkansas and he jumped up and won the Arkansas Derby (G1).”

After starting his career with three runner-up finishes, Holy Candy broke through in his most recent start on March 23, winning by 3½ lengths while going a mile under Joel Rosario.

“He was very impressive breaking his maiden,” Sadler said. “You have to see the tape of the race. He galloped out 20 lengths in front of the field. You get one shot (at the Kentucky Derby) and it is hard not to try.”

Sadler entered Holy Candy in last Saturday’s Santa Anita Derby (G1) but opted to scratch out of that race in favor of the Toyota Blue Grass.

“He was 8-1 for the Santa Anita Derby,” said Sadler of Holy Candy, who is 30-1 on the Toyota Blue Grass line. “I thought the extra week would be an advantage. He has trained a lot on the synthetic at Hollywood Park and trained well on it.”

Rosario, who won the Toyota Blue Grass last year aboard Brilliant Speed, has the mount Saturday on Holy Candy, who will break from post position nine.

Holy Candy galloped a mile and a half on the main track Thursday morning with exercise rider Lupillo Alferez up.

Sadler  brought two other horses to Keeneland along with Holy Candy in hopes of adding to his two stakes victories at the track. This afternoon he saddles the Craig Family Trust’s Home Sweet Aspen in the Vinery Madison (G1) and on Friday will send out the Pressday Syndicate’s Pressday (AUS) in the Maker’s 46  Mile (G1).

“We got him in November,” Sadler said of Pressday, a Group 1 winner in Australia. “The owners just contacted me about training the horse and I told them to bring him on over.”

“I think he will be better at a mile than down the hill,” Sadler said, referring to Santa Anita’s unique turf course. “After he is done racing here, he will go back to Australia.”

In addition to Holy Candy, all other Toyota Blue Grass entrants stabled at Keeneland had regular morning exercise.

Trainer Gennadi Dorochenko had both of his hopefuls on the main track. Louisiana Derby (G2) winner Hero of Order galloped at better than a two-minute lick according to clockers and then Russian Greek had a similar activity that finished with a half-mile in :50.

Trainer Mike Maker said that morning-line Toyota Blue Grass favorite Hansen and stablemate Gung Ho galloped at Louisville’s Trackside Training Center. Maker said both horses would ship to Keeneland today and be on the track Friday morning with an expected training time of 7:30.

At Churchill Downs, Dullahan, Prospective and Scatman galloped. All three horses are scheduled for similar activity on Friday and then van to Keeneland on Saturday.