Sackatoga has another Belmont favorite, but can they attend? 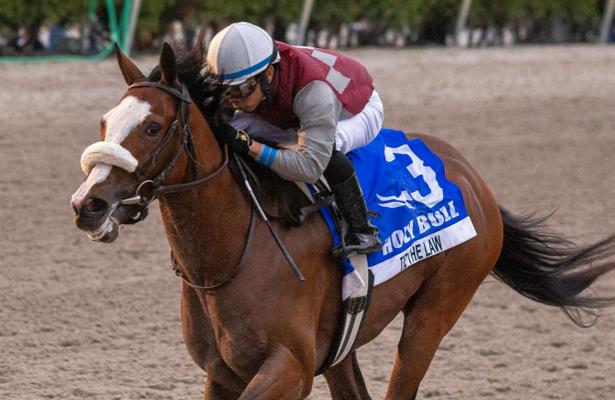 If things are truly back to normal, and if Jack Knowlton has his way, school buses would be rolling from Saratoga Springs to Elmont, N.Y., on Saturday.

Not full of students. Not on the first day of summer, anyway. This time they would be full of racehorse owners hoping to see Tiz The Law win the Belmont Stakes. And it would give Knowlton a sense of déjà vu.

“In 2003 we had one school bus that took us to the Kentucky Derby,” Knowlton said, remembering his unrequited Triple Crown journey with Funny Cide. “After we won there we had two school buses when our group increased to 120 for the Preakness. By the time we hit the Belmont we had four school buses.”

Where Funny Cide came up 5 1/2 lengths short of the Triple Crown, Knowlton’s Sackatoga Stable partnership numbered 10. Now there are 35 people with a piece of the action in Tiz The Law; only Knowlton and Lew Titterton are holdovers from 17 years ago. And Barclay Tagg is still the trainer.

But as it stands early this week, no one knows how many of the partners – if any – will be allowed at the track to watch Saturday’s first Belmont to lead off the Triple Crown. It is also the first to be contested at 1 1/8 miles since 1894. And it will be the first big sports event to be contested in New York since the coronavirus pandemic took hold three months ago.

“If anybody is allowed to go, I think it would be very few of us,” Knowlton said. “Whoever can’t go, one of our partners (Bruce Cerone) has Pennell’s Restaurant in Saratoga, and we’ll have a viewing there for probably 20-25 of the partners.”

It will be quite different from the victory parties that Knowlton hosted first at Belmont for October’s Grade 1 Champagne Stakes and then at Gulfstream Park for February’s Grade 3 Holy Bull. At the same time, it may not be as strict as the isolation-fest that came with Tiz The Law’s March 28 triumph in the Grade 1 Florida Derby.

“We couldn’t do anything,” Knowlton said. “I was in a condo a mile from Gulfstream with my wife and grandson and one of our partners. We FaceTimed with my son out in California. And that was it. That’s all we could do.”

So next weekend, instead of being in a box less than 100 feet from the finish line on Long Island, Knowlton is resigned to the idea that he and his partners will be nearly 200 miles upstate this weekend.

“In a perfect world every partner that wanted to be at Belmont would be there,” Knowlton said by phone Sunday afternoon from his home at Saratoga Springs. “But I see almost no possibility of that. My understanding is that NYRA has made a request for owner representation. But to date they haven’t heard back from the state.”

Unlike 17 years ago, when Funny Cide was a 12-1 shot to win the Derby, Tiz The Law is likely to be the first odds-on favorite since 1976 for a Belmont Stakes in which a Triple Crown is not there for the taking. Circa Sports in Las Vegas makes his odds –135. In other words, it takes a $135 bet to make $100 on a Tiz The Law win. A bet that he will lose the Belmont pays off at a little bit better than even money (+105).

“I listen to my trainer,” Knowlton said. “Barclay is a pretty conservative guy. I’ve been around him for 25 years now, and I don’t think I’ve ever heard him express the degree of confidence that he has in this horse coming up to this race. He just seems to feel so positive about the horse right now that I have to just feed off that.”

Jockey Manny Franco seemed to concur after he rode Tiz The Law in a final, maintenance work Sunday morning at Belmont Park.

“He’s a versatile horse,” Franco said. “He can be there on the pace or sit off, so I can do whatever I want. He’s run here before and won, and I think he likes the track, so that’s to our advantage.”

Adding to the confidence in Tiz The Law is the absence of his strongest rivals. Nadal is retired. Charlatan, Maxfield and Wells Bayou are injured. Gouverneur Morris, Ny Traffic and Shivaree are being focused on races next month.

Even second betting choice Sole Volante is not a certainty. Trainer Patrick Biancone said that after a “two-minute lick (Monday) we will know more about his energy level, and then we will decide.”

“A few weeks ago I thought that this year’s Belmont was going to be like the Kentucky Derby of 2020,” Knowlton said. “That’s when it looked like (Bob) Baffert’s horses would be there and maybe Maxfield. It would have been the first race where many of the top horses if not most of them would have faced each other. But now it’s the survival of the fittest. It’s not good for the game, obviously. But it’s part of the game. Hopefully we’ll be good for another six days.”

No matter whether Tiz The Law delivers Saturday, Knowlton will be faced with the problem of what to do with all his partners when the Travers rolls around at his home track at Saratoga, presumably Aug. 8. If there are still pandemic restrictions, it may be that much harder to keep all the owners away. And when it comes to the Kentucky Derby on Sept. 5, Knowlton can double down on the tough decisions.

“As operating manager that’s my responsibility,” he said. “I’m not looking forward to it. But I know what I’m going to do, and I know how I’m going to do it. I’ll do it by longevity. People that have been in Sackatoga for the longest period and have a share in this horse, then I’ll give them the opportunity (to attend). Whatever number they’ll give me, they’ll be there.”

Still hoping for an 11th-hour OK from Gov. Andrew Cuomo that would allow every owner to be at Belmont Park, Knowlton said that “maybe he could also attend and show that New York is really on its way back.”

He knows it is a long shot that he will be able to maintain a 17-year streak of attending the Belmont Stakes. But he is optimistic that the gang will be together at Churchill Downs on Labor Day weekend.

“Then we will be back to the school bus,” he said. “With social distancing, we’ll probably need two school buses.”