Rymska Shows Off Wicked Turn of Foot in Sweetest Chant 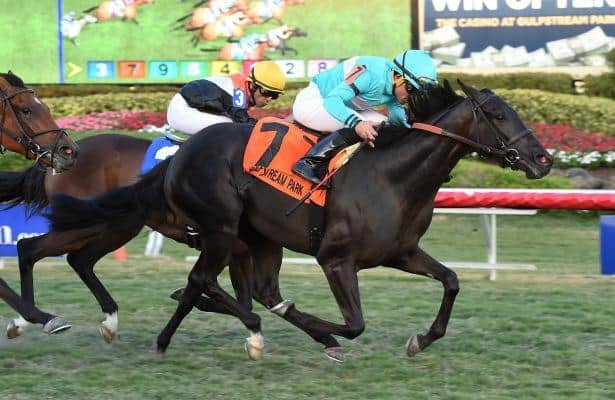 Rymska’s wicked turn of foot in the stretch of the $100,000 Sweetest Chant (G3) propelled her to victory while providing trainer Chad Brown with an amazing sixth consecutive win in the turf race.

Ridden by Joel Rosario, Rymska was making her first start since November in the mile race for 3-year-old fillies. Owned in partnership by Sheep Pond Partners, Alain Jathiere, Tom Coleman and Norton Herrick, the daughter of Le Havre notched her first North American win in the Sweetest Chant.

Rated off the pace, which was set by stablemate Okinawa through fractions of 24.09, 48.15, and 1:11.36, Rymska raced near the back of the pack down the backstretch. When Rosario set the even-money favorite down to the task in the stretch by moving her to the middle of the course, she began gobbling up ground as the wire loomed. The Brown-trained filly blew by Compelled, who had assumed the lead leaving the furlong marker, in the final yards to post a three-quarter-length margin of victory. It was a nose back to Fifty Five, who closed strongly to finish third in the nine-horse field.

“I thought I’d be a little closer, but they were going pretty nice up front and she was really comfortable,” Rosario said. “I was happy with where she was and wanted to make one run at the end. She responded really nicely.”

Brown, whose previous winners in the Sweetest Chant were Dayathespa (2012), Premier Steps (2013), Ready to Act (2014), Consumer Credit (2015) and Pricedtoperfection (2016), said his filly was showing all the right signs leading up to the Sweetest Chant.

“This is a nice race,” Brown said. “We point toward it every year and we’ve been lucky enough to have horses good enough to win these races. That’s what it takes. My staff did a great job, this horse in particular. From the Breeders’ Cup we got her down here just days after and got her acclimated to South Florida and she’s had a tremendous winter. She’s been putting on weight, training well, fresh. I thought a mile might be a touch short, and she showed her class to get up in time.”

While Rosario was comfortable with his early position, Brown admitted he was a bit worried.

“I was [concerned],” Brown commented. “He tried to tuck her in the first turn and somebody took his spot and she was not only far back off a slow pace but she was three wide. It wasn’t his fault. I could see what his intentions were but Joel’s a top-class rider. He went to Plan B. He knew he was sitting on a ton of horse and he just bided his time, and she won despite all that.”

The win was Rymska’s third in six career starts. She began her career in France last year, where she was a listed stakes winner. In her first start for Brown, she finished fifth in the Breeders’ Cup Juvenile Fillies Turf (G1), which was her most recent start before the Sweetest Chant.