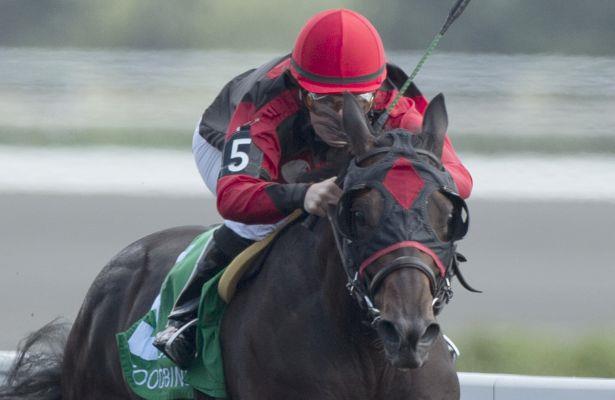 Trained by Scott Fairlie for Rijack Farm and Ace Racing Stable Inc., the dark bay son of Giant Gizmo, sent to post as the 4-5 mutuel favourite in the six furlong ‘Poly’ stake for Ontario-bred juveniles, was guided to a second consecutive victory by Michelle Rainford.

Ruth Less Blue’s front-running score was characteristic of his maiden victory on August 2 when sprinting six furlongs on the Woodbine main.

Leaving from the outside post in a compact field of five, Ruth Less Blue broke out of the gate swiftly and took a commanding lead through splits of :22:85 and :46.23 with Get’erdonebud tracking his early foot. Ruth Less Blue moved comfortably around the turn, holding onto a narrow lead, as Get’erdonebud and Conquest Daddyo advanced into contention.

With an eighth of a mile to run, Ruth Less Blue veered towards the rail, and ducked in sharply again at the sixteenth pole, but quickly straightened out, resiliently staying on for a half-length win. Conquest Daddyo, piloted by Patrick Husbands, rallied three-wide down the stretch, to earn place by 1 ¼-lengths over Get’erdonebud. Final running time for the six furlong event was 1:10:71.

“I’ve always loved this horse”, said Fairlie, “I knew he was a runner from the start, it’s the first time I’ve ever run a two-year-old in a stakes race”.

Ruth Less Blue, bred in Ontario by Rijack Farm Stable and Fairlie, banked $90,000 in victory while improving his record to two 2-1-0 from three starts.

Habibi, patiently ridden by Emma-Jayne Wilson, was full of run down the lane en route to an impressive score in Saturday's co-featured $102,600 Flaming Page Stakes, at Woodbine.

Trained by Mark Frostad for Augustin Stable, Habibi arrived at the 1 1/2-mile turf stake for older fillies and mares from a disappointing eighth-place run against the boys in the Grade 3 Singspiel Stakes on July 5.

Bred in New Zealand, the six-year-old Ekraar mare was winning her first race since conquering the boys in the Group 1 New Zealand Derby on March 2, 2013.

Tiz Ro and Norquay set the pace in the Flaming Page dueling along the backstretch through splits of :50.33 and 1:14.94 as a group of four comprised of Button Down, Silverville, Giant Shadow and Habibi stalked their early foot.

Button Down and Industrial Policy advanced through the turn with Wilson waiting until nearly the end of the sweeping turn to instigate a wide rally with Habibi.

Industrial Policy lacked racing room as the field converged on the pacesetters, with Button Down and Habibi moving best of all, but there was no containing the energetic Habibi who drove clear a length winner.  Button Down stayed on strong for place, two lengths in front of the late moving Llanarmon.  Habibi covered 1 1/2-miles in 2:28.81.

Wilson was pleased with the trip she engineered in the 1 1/2-mile stamina test.

"I was a little worried the pace may string out and that Tiz Ro could get away on her own. I just wanted to have my filly settled, covered in behind somebody, and switch her off a little bit," said Wilson. "She was just cruising easy. A mile and a half is fun when you have a horse that can go the distance and she's bred to do it."

Habibi arrived in North America in 2014 and made a single start when eighth in the Grade 2 Royal Heroine at Santa Anita. The dark bay mare returned to action this spring at Santa Anita for a pair of starts before shipping to Woodbine and narrowly missing a win in her Canadian debut when nosed at the wire in a grassy optional claiming event.