Rushing Fall gets 'perfect distance' in Belmont's Just a Game 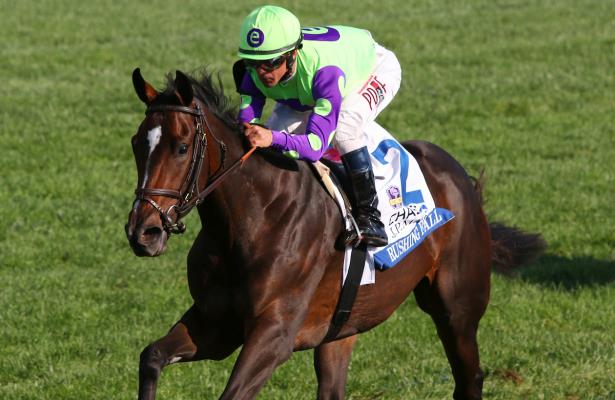 E Five Racing Thoroughbreds' Rushing Fall will look to continue her winning ways when she takes on six other graded stakes winners in the Grade 1, $700,000 Longines Just a Game on Saturday afternoon at Belmont Park.

Listed as Race 4 with a post time of 1:22 p.m. Eastern, the one-mile event for older fillies and mares over the Widener turf course is just one of eight Grade 1 events carded, highlighted by the 151st Belmont Stakes.

Trained by Chad Brown, Rushing Fall has won seven of her eight career starts, including Grade 1 victories in the 2017 Breeders' Cup Juvenile Fillies Turf at Del Mar, the Queen Elizabeth II Cup last October at Keeneland and most recently, the Jenny Wiley at Keeneland.

The 4-year-old daughter of More Than Ready is also unbeaten in three starts over the Just a Game's one-mile distance, and will be making her first start at Belmont since her successful career debut, which she won over fellow Just a Game contender Daddy Is A Legend.

"She's been training great and Chad has done a phenomenal job with her," said E Five Racing Thoroughbreds' Bob Edwards. "She seems to run well on everything and obviously she likes Keeneland a lot, but she doesn't really have a favorite surface because she runs well everywhere we place her.

"She's very versatile. She can run off the pace, she can wire the field, she can do whatever," continued Edwards. "Javier [Castellano] works her in the mornings and on big days he really seems to ride her perfectly. When she's in the paddock she just walks around and struts her stuff. A mile is the perfect distance for her, so, hopefully she loves up to the experience on Saturday."

Bred in Kentucky by Fred Hertrich III and John Fielding, Rushing Fall is out of the Forestry broodmare Autumnal and was purchased for $320,000 from the Fasig-Tipton Yearling Sale in August 2016. Rushing Fall will break from post 4 under Castellano.

Brown also sends out Juddmonte Farms' Environs, who was impressive in her North American debut over the Keeneland turf course on April 5, beating allowance company by 3 ½ lengths. Previously trained by Andre Fabre, the homebred daughter of Dansili was a three-time winner in France before coming to the United States. She enters the Just a Game off of a fourth-place finish in the Grade 2 Churchill Downs Distaff Turf Mile, where she broke slow and sat well off the pace but lacked enough racing room to make a winning run.

Trained by Brad Cox, the bay daughter of Sir Prancealot was previously conditioned by Simon Callaghan, for whom she won the Grade 2 Royal Heroine at Santa Anita last April. She made her first start for Cox a winning one in the Blushing K.D. at the Fair Grounds and two starts later won the New Orleans Ladies over the Stall-Wilson Turf Course prior to the Distaff Turf Mile.

Beau Recall will break from post 3 under Irad Ortiz, Jr.

The second and third-place finishers of the Churchill Downs Distaff Turf Mile will be looking for another crack at Beau Recall in the Just a Game.

Breaking from post 7, Got Stormy will look to turn the tables on some familiar foes. She was only 1 ¼ lengths away from victory last out when finishing second behind Beau Recall.

Trained by Mark Casse and owned by Gary Barber in partnership with Southern Equine Partners, the daughter of Get Stormy was a hard-fought third in the Grade 1 Jenny Wiley behind Rushing Fall where she was only beaten 1 ½ lengths. Got Stormy will be seeking her first stakes victory since the Grade 3 Ontario Colleen in July at Woodbine.

Got Stormy will be ridden by Tyler Gaffalione from the outermost post 7.

Two-time graded stakes-winner Daddy Is A Legend was third in the Grade 2 Churchill Downs Distaff Turf Mile last out. The effort was the daughter of Scat Daddy's first start since a close second behind Uni in the Grade 1 Matriarch at Del Mar in December, where she recorded a career-best 100 Beyer.

Daddy Is A Legend has registered graded stakes victories in Del Mar's Grade 3 Jimmy Durante, which she won in November 2017, as well as the Grade 3 Lake George at Saratoga last July.

Daddy Is a Legend will be ridden by Manny Franco from the rail.

The 5-year-old daughter of Tapit is out of graded stakes winner La Cloche, whose dam Memories of Silver won the Just a Game in 1997. Bellavais was a two-time stakes winner for her former conditioner James Toner and made a winning debut for Pletcher last October when coming off nearly a year layoff. She enters the Just a Game from a fifth-place finish in the Jenny Wiley, which was her first start at such caliber.

Bellavais will be ridden by Hall of Famer John Velazquez.

Rounding out the field is Capla Temptress, who won the Grade 3 My Charmer at Gulfstream Park two starts back.

Owned by Juddmonte Farm and trained by Hall of Famer Bill Mott, the daughter of Lope de Vega won the Grade 1 Natalma at Woodbine as a 2-year-old in her North American debut. She enters the Just a Game from a seventh-place finish in the Grade 2 Churchill Downs Distaff Turf Mile.

Capla Temptress will be ridden by Joel Rosario from post 5.

The Just a Game is named in honor of Peter Brant's three-time graded stakes winner in New York, whose career highlights include wins in the New York Handicap, Diana and Flower Bowl. Trained by Hall of Famer LeRoy Jolley, the Irish-bred daughter of Tarboosh won eight straight races before finishing second to French Colonial in the Grade 1 Man o' War.