Runhappy progeny are cashing in at longer distances 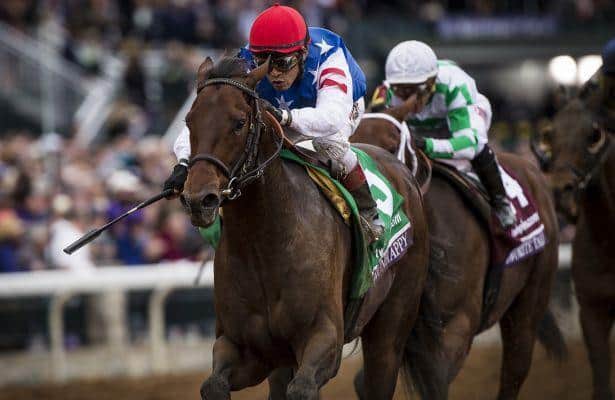 When Smile Happy powered home to a 3 1/4-length win in the Kentucky Jockey Club (G2), he was the 4.80-1 third choice in the race off his debut victory at Keeneland a month earlier. But his win was part of a trend for his sire Runhappy, whose offspring are showing an affinity for longer distances on dirt.

Looking at stats before the race, what really caught my eye is that Runhappy progeny were winning at 24 percent going longer than a mile on dirt or synthetic.

After the race, Runhappy owner Jim McIngvale told Horse Racing Nation how Runhappy has gotten off to a slower start at stud.

“The first year was rough, but this year has been great,” McIngvale said. “In fact, he’s right now the No. 10 leading sire in average earnings per running for this entire year. That’s a pretty darn good stat. With his stud fee of $12,500, that’s a whole lot less than the other ones.”

Looking at Runhappy's sire stats, a big part of his success seems to be coming with longer distances, especially on dirt and synthetic. His overall stats are posted below. The HRN Impact looks at the odds of all his starters to determine the runner's expected wins according to the odds and takeout. (You can think of HRN Impact like ROI, but it is a more accurate statistic because it is based on all starters, not only the winners.)

We can see from the chart below that Runhappy's offspring are performing close to bettors' expectations on dirt while underperforming on turf and showing interesting and promising results on synthetic, although based on a very small sample size.

But interestingly the trends for Runhappy get only stronger when breaking out sprints from routes. In both cases, based on the odds, the expected wins of these starters fall in the 16-17 percent range. But going a route, Runhappys are surprising bettors and outrunning their odds, jumping to 21 percent winners – good for a plus-29 percent HRN Impact. This makes a strong case that they are getting better with distance based on pedigree.

Taking things one step further, we can break out Runhappy offspring performance by surface and distance. We can see they are slightly underperforming expectations in dirt sprints with an HRN Impact of minus-11 percent. But on dirt routes this stat jumps to a 23 percent win percentage and an HRN impact of plus-28 percent. The synthetic stats are interesting with a small sample size, but note how again they are much better routing than sprinting.

These trends are certainly in Smile Happy's favor as he tackles longer distances on the 2022 Kentucky Derby trail. The next time you see a Runhappy going from a sprint to a route, be sure to consider an expected improved performance. 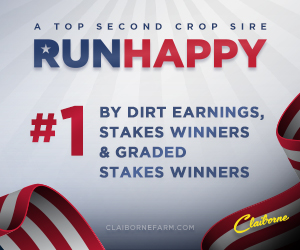