Run down probables for this week's 5 Churchill Downs stakes 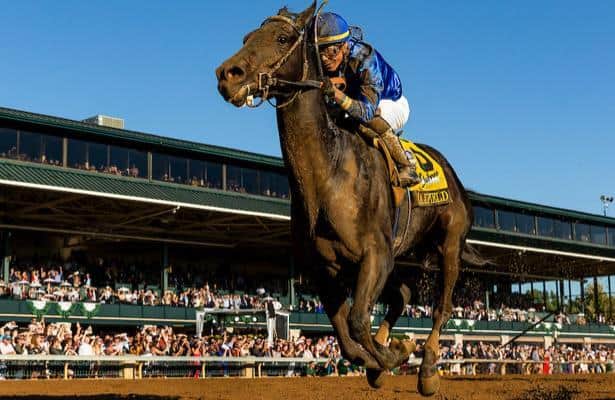 When Churchill Downs officials saw the nominations list for its Matt Winn Stakes, the points it carries toward qualifying for the 2020 Kentucky Derby were upped to a 50-20-10-5 distribution.

Suddenly, the Grade 3, $150,000 race is a major event on the way to Sept. 5, and it tops five stakes set for Saturday under the Twin Spires.

Per racing secretary and stakes coordinator Dan Bork, here’s a closer look at who’s expected to enter the Matt Winn and four other stakes, each of those worth $100,000.

Maxfield’s back, set to run for the first time since winning Keenealnd’s Breeders’ Futurity (G1) last October. He also owns a debut win over the track at Churchill while off to an auspicious 2-for-2 start to his career.

An ankle chip derailed plans of running in the Breeders’ Cup Juvenile, but the Godolphin homebred caught a break when the Derby was pushed back to the fall. In no rush to return, he has found an ideal 1 1/16-mile comeback spot.

Second choice on the morning line looks like a tough call.

Major Fed ran second in a division of the Risen Star (G2) and rallied for fourth after left at the start of the Louisiana Derby (G2); Max Player, should he leave New York, was last seen winning the Withers Stakes (G3); and Pneumatic is a 2-for-2 Winchell Thoroughbreds runner stepping up to stakes company.

A host of graded winners converge in this one-mile event, also around one turn, that has attracted a mix of horses setting themselves up for tries at races such as Churchill’s Stephen Foster (G2) or perhaps Belmont Park’s Metropolitan Handicap (G1).

Global Campaign may have untapped potential, as nagging injuries prevented him from running more often at age 3, when he still managed to win a graded stakes race. His comeback allowance win at Gulfstream Park was measured.

Mr. Money won four graded stakes races last year, two of them over this track, but didn’t fare as well in his own 4-year-old debut. A sixth-place Oaklawn Mile finish was almost too bad to believe, and he’s back working like his old self in the mornings.

Owendale is the other headliner. He’ll be coming off the bench having won a trio of graded races before failing to factor in the Breeders’ Cup Classic. The Brad Cox trainee also likes Churchill having run second most recently to Tom’s d’Etat in the Clark Stakes (G1).

This could have been a competitive spot for Monomoy Girl had connections not opted to instead run her last weekend in allowance company. Now, the local 1 1/16-mile prep for the June 27 Fleur de Lis (G2) is up for the taking.

The probables list remains short, led by Dunbar Road, who for the Chad Brown barn began her career 4-for-5 with victories in the Alabama (G1) and Mother Goose (G2). She hit the board facing older in the Spinster (G1), won by eventual Breeders’ Cup Distaff heroine Blue Prize, and ran fifth in the championship race to close the season.

Awe Emma, transferred recently to trainer Dallas Stewart, lost her rider at the start of Oaklawn Park’s Azeri Stakes (G2) before coming back to win in allowance company in Arkansas. She ran eighth most recently in the Apple Blossom (G1), and this spot certainly means a class break from a Breeders’ Cup-like bunch.

Motion Emotion has been a consistent type at lower levels, finishing the Oaklawn meet with a pair of placings in allowance company. Going back to last season, she did win the Zia Park Oaks. Why not take a shot in a short field?

Finally, Breeders’ Cup Juvenile Fillies Turf winner Sharing found a place to make her 3-year-old debut. The Graham Motion trainee is firing bullet works at the Fair Hill training center in Maryland in anticipation of this comeback, her first race since November, facing fellow sophomores at a mile.

Outburst is the other big name in the prospective field. The Eddie Kenneally filly climbed the ladder from six-furlong maiden winner to 1-mile allowance winner before taking on graded company in Tampa Bay Downs’ March 20 Florida Oaks (G3), in which she prevailed by 1 1/2 lengths.

Mike Maker-trained Queen of God also merits respect as a last out stakes winner. She took Turfway Park’s Bourbonette Oaks over Pass the Plate, another Tepin probable, her second added-money victory after a minor stakes win at Gulfstream.

Field Pass has gutted out back-to-back stakes wins by a neck, winning Gulfstream’s Dania Beach over the turf before Turfway’s Jeff Ruby Steaks on the Synthetic. Saturday, he’s back on the lawn for this one-mile event for 3-year-olds.

Hieronymus will be put to a class test of sorts after three straight wins to close out the Fair Grounds meet. Most recently, he won the Black Gold, a $75,000 event.

Billy Batts isn’t on the probables list, but he looks like a fit for this spot. Now with trainer Steve Asmussen, the Rockingham Ranch runner was a close second in the Breeders’ Cup Juvenile Turf, won Santa Anita’s Baffle Stakes and simply failed to fire over dirt when shipped overseas for the Saudi Derby in late February. If he goes, he could vie for favoritism.