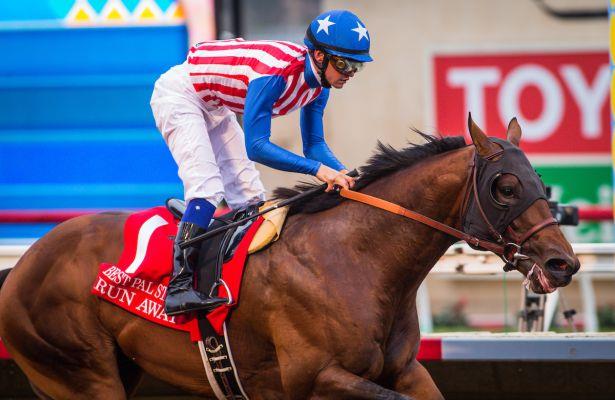 Kaleem Shah’s Run Away lived up to his name and then some Saturday with a runaway victory in the featured Grade II $200,000 Best Pal Stakes for two-year-olds.

Making it three victories in as many starts, Run Away, piloted by Flavien Prat, attended the early pace and opened up on his opposition turning into the stretch en route to a convincing three and one-half length victory . Longshot Dia de Pago, a 25-1 outsider ridden by Corey Nakatani, rallied to be second, two and one-half lengths in front of third-place Fleetwood.

Serengeti, the 6-5 favorite, bobbled at the break to be away slowly under jockey Mike Smith, made a promising move into contention on the far turn but then faltered in the stretch to wind up sixth in the eight-horse field.

With his Best Pal triumph, Run Away likely earned the role of favorite in the climactic seven-furlong Grade I $300,000 Del Mar Futurity on closing day of the summer season, Monday, September 4.

Run Away, winner of the Santa Anita Juvenile in early July, earned $120,000 for his Best Pal win to increase his bankroll to $212,400. Owner Shah won the 2016 Best Pal with the Bob Baffert-trained Klimt who went on to win the Del Mar Futurity. Baffert sent out Serengeti in Saturday’s Best Pal renewal.

There were six perfect tickets in Saturday’s Pick Six and each paid $41,929.

FLAVIEN PRAT (Run Away, winner) – “I knew he’d run well; he’d been training so well. But I didn’t really expect to win by that far. Simon (trainer Simon Callaghan) has done a great job with him, though, and he’s a very talented colt, so maybe we shouldn’t be surprised. Can he run farther? We don’t know. We know he can run six and a half furlongs, so we’ll enjoy that for a while.”

COREY NAKATANI (Dia de Pago, second) – “He ran dynamite. The 3 horse (Master Ruler) all but eliminated us at the break, but I was able to gather him up and get him back into his rhythm. He came running. Big race for him; he’s a talented colt. And he’ll like it farther.”

KENT DESORMEAUX (Fleetwood, third) – “New experience for him today – getting that dirt thrown in his face. Education time. More distance – oh, yeah. He’s going to be so much better when they go farther.”

SIMON CALLAGHAN (Run Away, winner) – “I think it was even better than his last race. He’s got great gate speed but he isn’t one of those horses that is speed crazy. I thought he’d get over this track well. I was a little nervous when he put in a slow breeze (5 furlongs, 1:03.60 a week earlier) when I was in Saratoga. But my team here assured me that it was a good breeze. He’s just a cool horse – fast, very mature and I think he’s going to get better as we stretch out. The Futurity is next.”

The stakes win was the sixth of the meet (the most by any rider) for jockey Prat, but his first in the Best Pal. He now has 16 stakes wins at Del Mar.

The stakes win was the first of the meet for trainer Callaghan and his first in the Best Pal. He now has four stakes wins at Del Mar.

The winner is owned by Kaleem Shah of San Diego and Vienna, Virginia. He won this same race last year with the horse Klimt.