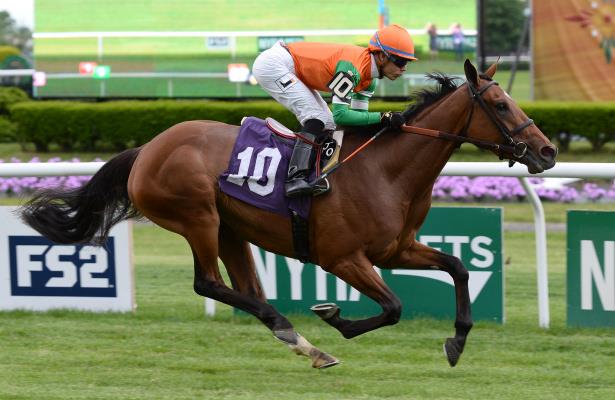 Belmont Park's Fall Championship Meet will feature six Breeders' Cup "Win and You're In" qualifiers held over two outstanding weekends of thoroughbred racing. In all, 42 stakes worth more than $10.1 million and fan-friendly activities are among the highlights as live racing returns to downstate New York for Belmont's 38-day meet, which runs from Friday, September 8 through Sunday, October 29.

On Opening Day, Rubilinda headlines a field of 10 3-year-old fillies at six furlongs on the turf on Friday, September 8, for the $100,000 Christiecat, the first of three stakes scheduled for opening weekend.

A daughter of European champion Frankel, the Don Alberto Stable homebred will make her stakes unveiling for trainer Chad Brown following her 3 ¼-length maiden-breaking debut on May 27 at Belmont and finishing a troubled second against allowance company on July 9.

"She's a very talented filly," said Brown. "Unfortunately, she's had a little bit of bad racing luck, we tried to race her at Saratoga but had to scratch after the race was moved off the turf. Six [furlongs] may be a bit short for her but she's ready to run so we'll enter her."

Rubilinda will be ridden by Jose Ortiz from post 4.

Brown will also saddle Noble Freud for Head of Plains Partners, Xpress Thoroughbreds, Michael Kisber, and Medallion Racing. The New York-bred filly by Freud has made her first start on turf last time out to win an optional-claiming race in front-running fashion on August 13 at Saratoga.

With Irad Ortiz, Jr. in the irons, Noble Freud will depart from post 7.

Trainer Christophe Clement and Waterville Lake Stable will send Epping Forest, by Exchange Rate. She has three wins from four starts at Belmont and is 2-for-2 at the distance. In her most recent start, she finished a game second in the Coronation Cup on July 31 at the Spa.

"It's a little bit of a break from her last race, but she's doing well," said Clement. "She's going to run fresh and I'm excited about it. She's always run well at Belmont and finished well in her last start."

Epping Forest will break from post 6 with Joel Rosario aboard.

Rounding out the field is Adorable Miss, Smiling Causeway, Riley's Choice, the French-bred Boos, Heavenly Score, and Tickled Pink. Too Much Tip entered for the main track only.

On Saturday, September 30, a pair of "Win and You're In" races for the Breeders' Cup World Championships to be held at Del Mar on November 3-4 will anchor the card: the Grade 1, $500,000 Joe Hirsch Turf Classic in the Turf division and the Grade 1, $350,000 Vosburgh in the TwinSpires Sprint division.

The lead up to the Breeders' Cup will continue on the following weekend with the centerpiece of the fall meet on Saturday, October 7, featuring the Grade 1, $750,000 Jockey Club Gold Cup. The 1 ¼-mile Gold Cup, which offers automatic entry and a fees-paid trip to the $5 million Classic, will be joined by the Grade 1, $500,000 Champagne, a qualifier for the Sentient Jets Juvenile. The "Super Saturday" program will also include the Grade 3, $500,000 Hill Prince for 3-year-olds on the turf and the $150,000 Belmont Turf Sprint Invitational for 3-year-olds and up.

A pair of Grade 1 Breeders' Cup qualifiers will round out the weekend on Sunday, October 8, featuring the $500,000 Flower Bowl and the $400,000 Frizette, awarding the winners an all-fees-paid berth into the Filly & Mare Turf and Juvenile Fillies divisions, respectively. Sunday's first post is at 12:55 p.m.

The Grade 2, $200,000 Knickerbocker for 3-year-olds and up at 1 1/8 miles on the turf will highlight Belmont's Columbus Day holiday program on Monday, October 9.

The Empire State will take the spotlight on Saturday, October 21, when the top New York-breds gather at Belmont Park to complete in eight stakes races worth $1.75 million, highlighted by the $300,000 Empire Classic at 1 1/8 miles. Belmont Park also will host Taste New York featuring local New York wines, spirits and food, along with craft vendors, fall-themed family activities and the return of College Day, in which area students can compete for prizes and win scholarships.

Belmont Live will return opening weekend, September 8-10, with two-hour live telecasts on MSG+. Running from 4-6 p.m., Belmont Live will continue through October 1 and return for a special broadcast on Empire Showcase Day.

Live racing will be conducted Friday, Saturday and Sunday through September 17. Beginning September 20, racing will be conducted Wednesdays through Sundays, with first race post time at 1:30 p.m. through Sunday, October 1, after which first race post time will be 12:55 p.m. General parking is free, and admission to Belmont Park is $5. For more information, please visit NYRA.com.

For the Belmont Fall meet, the second and third floors of the grandstand will be closed to visitors for the season. The second-floor platform connecting the Long Island Rail Road station to Belmont Park will also be closed, as will the second-floor entrance. All other areas of Belmont, including all floors of the clubhouse, the entire apron and the backyard will be open to the public.
Source: NYRA Communications
Noble Freud Rubilinda Epping Forest Chad C. Brown Jose L. Ortiz Don Alberto Stable Belmont Park Christiecat Christiecat (2017)