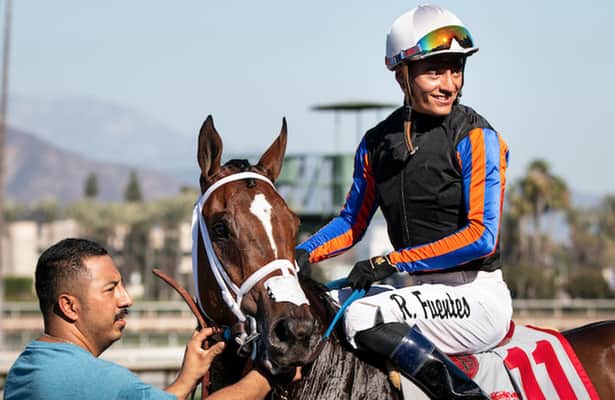 Jockey Ruben Fuentes returned to Canterbury Park Sunday afternoon, coming to the winners' circle for the first time since being injured in a race on June 23. Fuentes underwent surgery June 27 after injuries including a light skull fracture as well as cracking in two neck vertebrae and his collarbone.

Fuentes was recognized by track announcer Paul Allen in the winners' circle after the day's sixth race, where his compatriots in the local jockey colony joined him. With 12 wins and $284,807 in purses, Fuentes is still seventh in wins and sixth in earnings for the Canterbury Park meet as of Monday. Those victories include a win with Dame Plata in the $50,150 10,000 Lakes Stakes, a sprint for Minnesota-breds, on May 18.

Honored following race 6 ?@CanterburyPark? to welcome ?@9I5Kid? back to the winner’s circle and for our riders to show support after that bad spill two wks ago. Ruben is one w/ the Holy Spirit and LOVES God no matter what hurdle/success he faces, and that’s beautiful. pic.twitter.com/dPkvyaity0

With his appearance at the races, Fuentes wanted to bring attention to the Leg Up Fund night on July 30 at Canterbury Park. Leg Up Fund is a 501(c)(3) nonprofit organization that provides financial assistance to injured Canterbury Park jockeys while they recuperate. The organization will be hosting events during the races that night to raise funds for its work supporting injured local riders.

Thanks to everyone for the kind words and prayers. I greatly appreciate everyone’s generous support!!!

I feel great and I can’t wait to be cleared for Physical Therapy God is great!!?????????? pic.twitter.com/dnujPHHUhv

A GoFundMe page set up for Fuentes by his brother Miguel is still raising money for his recovery. So far his community has raised over $19,000 as of Monday, with a current goal of $25,000. According to a statement to Horse Racing Nation from Jeff Maday in the Canterbury Park media office, Fuentes is in great spirits, and is looking forward to starting physical therapy as soon as he is able to.