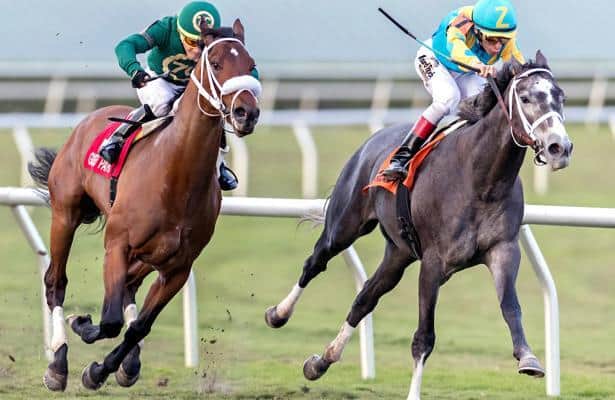 Zayat Stables' Gidu will be hoping the cross-Atlantic trip will help him return to form as he competes against 10 other talented 3-year-olds in the 34th running of the Grade 2, $200,000 National Museum of Racing Hall of Fame on Friday at Saratoga Race Course.

Gidu ran sixth in the Group 1 Commonwealth Cup on June 22 at Royal Ascot. The trip to Europe came after the son of Frankel won back-to-back stakes, winning the Columbia by 1 3/4 lengths on March 10 at Tampa Bay Downs and edging Curlin's Honor by a neck to win the Paradise Creek on May 26 at Belmont Park.

The Todd Pletcher trainee started his career as a sprinter and returned to that distance in the seven-furlong Paradise Creek. He will now take aim at the Hall of Fame's 1 1/16-mile distance on the turf in his first appearance at the Spa since running second in his debut on August 14.

"I thought he ran well [at Royal Ascot]," Pletcher said. "He's won at a mile and it's kind of that time of year where there's not a ton of options for 3-year-olds on the turf going six to seven furlongs, so we're going to try to stretch him out to a mile and a sixteenth and see how he handles that."

The Irish-bred gray colt has three wins and two seconds in five starts in North America and will again have the services of Hall of Fame jockey John Velazquez from post 6.

Gidu's stablemate, Maraud, will look to notch his second graded stakes win, which includes a 1 1/2-length score over Speed Franco in the Grade 3 Palm Beach on March 3 at Gulfstream Park. The son of Blame, who was purchased for $375,000, will be cutting back in distance after a sixth-place finish in the Grade 1 Belmont Derby on July 7.

Maraud will have Irad Ortiz, Jr. pick up the mound from post 2.

Combatant has come close to his first stakes win and will look to make the next step for Hall of Fame trainer Steve Asmussen. The Scat Daddy colt ran fifth in the Grade 3 Matt Winn on June 16 at Churchill, marking his first start since his 18th Grade 1 Kentucky Derby effort at 1 ¼ miles on May 5.

Combatant started his sophomore campaign with back-to-back runner-up finishes in the Smarty Jones and the Grade 3 Southwest at Oaklawn Park. In his next start, the Grade 1 Arkansas Derby on April 14, he finished just off the board, with Solomini earning third-place honors by a head.

Ricardo Santana, Jr., who teamed with Asmussen to win the Grade 2 Jim Dandy with Tenfold on Saturday, will ride from post 7.

Raging Bull enters the weekend with momentum, finishing second in the Manila in his first stakes appearance after starting his career 2-for-2 for trainer Chad Brown.

The French bred, owned by Peter Brant, will be making his first start at more than a mile, drawing post 4 with regular jockey Joel Rosario aboard.

"Raging Bull is doing really well, I'm excited to get him in there," Brown said. "He's a lightly raced horse but he has a ton of talent."

Ride a Comet, trained by Mark Casse, will carry a two-race winning streak into his second graded stakes start and has won four of his last five starts. After winning a sprint against allowance company on June 1, the Candy Ride colt won at a mile at Woodbine, earning a personal-best 82 Beyer Speed Figure in the Charlie Barley. Jose Ortiz will be in the irons for Ride a Comet's first Saratoga start, departing post 5.

Have At It won an optional claimer at Belmont on July 5, giving trainer Christophe Clement confidence to go up against more challenging competition. Sired by Kitten's Joy, Have At It has the pedigree to go longer distances and has been training at Saratoga, breezing four furlongs in 51.22 seconds on the Oklahoma turf track Friday.

"He worked very well over softer turf the other day and I think the conditions will suit him even better," Clement said. "His last race was impressive. It was a strong work here and he galloped out strongly. With rain forecast, we'll go from there."

Rounding out the field is Gemonteer, a stakes winner in the Not Surprising on July 7 at Gulfstream; Gunnison, the Tale of the Cat victor on June 2 at Monmouth; Battle At Sea, making his graded stakes debut; Sand Dancer; and the English-bred Westerland, third in the Manila in his first North American race on July 4 at Belmont, for Hall of Fame trainer Bill Mott.