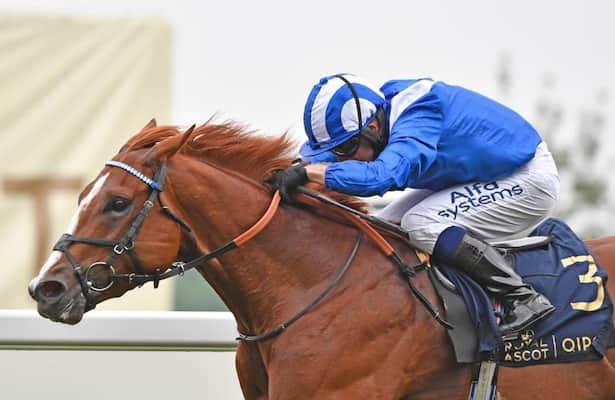 Subjectivist gave a display of staying brilliance for Joe Fanning and trainer Mark Johnston Thursday in the Ascot Gold Cup, one of the crown jewels of Royal Ascot.

Run over the marathon trip of two and a half miles, most expected three-time winner and 5-6 favorite Stradivarius to strike again, but it was the 4-year-old Subjectivist, at 13-2, who took the honors as Fanning set sail for home entering the straight and never looked like being caught.

Princess Zoe outran her odds of 28-1 to take second place for Irish trainer Tony Mullins, fully five lengths behind the impressive winner. Spanish Mission (7-1) was a further half-length back in third.

Procession in the Gold Cup, but it's Subjectivist rather than Stradivarius who is awesome in victory this year for Joe Fanning and @Johnston_Racing! @Ascot#RoyalAscot pic.twitter.com/fkgRzghvnF

The race was the first for Subjectivist since he won the two-mile Dubai Gold Cup (G2) in March.

“We thought in the wintertime that Subjectivist was so much on the up," Johnston said. "He won in France last season on heavy ground and people were thinking he needed heavy ground to excel. But then he went onto Dubai and that was the big question mark, could he go on fast ground? That was the performance of his life and I couldn't be confident coming here that he could replicate it after such a long time off and a big gap in between. I knew if he could reproduce that, he would take an awful lot of beating."

Norfolk Stakes (G2). Jockey Paul Hanagan timed a late charge to perfection when winning the Norfolk Stakes on Perfect Power in the opening contest on day three of Royal Ascot. Protagonists in this five-furlong dash for 2-year-olds were spread across the width of the track, but it was the Richard Fahey-trained Perfect Power (14-1) who burst from the pack down the stands’ side to prevail. Go Bears Go (6-1) was beaten a head racing on the far side, with Project Dante (6-1) a nose behind in third on the stands’ side rail. The Norfolk is a qualifier for the Breeders’ Cup Juvenile Turf Sprint.

A future star in the making! :star-struck:

Perfect Power wins the Norfolk Stakes and punches his ticket to the #BreedersCup! #FutureStarsFriday #WinAndYoureINpic.twitter.com/yxTFF5eYO5

Trainer Wesley Ward had two U.S. starters in the race: Lucci, who finished fifth and Nakatomi, who finished eighth. His record for the meet is 7: 0-1-0 with one more starter expected, Campanelle, in Friday's Commonwealth Cup (G1).

Ribblesdale Stakes (G2). Loving Dream sprang an 18-1 surprise to give John and Thady Gosden a fourth win of the week in the Ribblesdale Stakes. Ridden by Robert Havlin in the 1 1/2-mile race for 3-year-old fillies, Loving Dream was always prominent before making her challenge and kept pulling out extra as the challengers tried, but failed, to go past. Eshaada (17-2) finished strongly for second, beaten three-quarters of a length, with Nicest (28-1) a further 1 3/4 lengths back in third.

Hampton Court Stakes (G3). The 11-8 favorite Mohaafeth won after being ridden with confidence throughout the 10-furlong contest. He was steered wide into the straight by Jim Crowley before powering clear for a length and three-quarter success over Roman Empire (14-1), who was slightly impeded when the winner edged right inside the final furlong. Secret Protector (11-1) finished well for third, a further head behind.

King George V. Jockey Hector Crouch enjoyed his first Royal Ascot winner aboard 5-1 shot Surefire in the King George V Handicap over a mile and a half. Riding for Ralph Beckett in the 3-year-olds-only contest, Crouch and his mount had just enough in reserve to fend off the late challenge of 4-1 favorite Sir Lamorak, who was eating up the ground as the winning post came. Parachute (16-1) was prominent for much of the race and held on for third.

From way back! Surefire and @HectorCrouch win the King George V Stakes for @RalphBeckett!#RoyalAscot pic.twitter.com/zXlSEEMloa

Brittania. Champion jockey Oisin Murphy chalked up a second win for the week on 18-1 chance Perotto in the Britannia Handicap. Always a fiercely competitive handicap for three-year-olds, this year’s edition of the straight mile contest was no exception. Murphy guided the Marcus Tregoning-trained Perotto through the stands’ side pack from near last, before quickening clear of his 28 rivals. Bigger odds filled the frame, with Liffey River (20/1) finishing strongly for second place, beaten a half-length, Quintillus (28-1) taking third and Dubai Honour (28-1) fourth.

Buckingham Palace. Hot on the heels of Hector Crouch breaking his Royal Ascot duck, Jason Hart did the same aboard Highfield Princess in the Buckingham Palace Handicap, the final race of a thrilling day three. A 28-strong field lined up for the 6-furlong contest, but it was the only filly in the race, Highfield Princess (18-1), that came home best to give trainer John Quinn a fourth Royal Ascot success. Danyah (10-1) took second, a length and a quarter behind the winner, with Riot (18-1) and Lord Rapscallion (25-1) taking the minor honors.

Chris Stickels, Ascot’s Clerk of the Course, said: “The going was good to firm today after 3.6 millimeters of rain from yesterday until the start of racing today.

“There will be showers on and off this evening, and we are due quite a lot of rain tomorrow. It’s hard to know how much at this stage, but 12 millimeters (nearly a half-inch) is the most likely scenario. There is a small percentage chance it could be higher. We will just have to see what we get – clearly no watering will take place!

“The rail on the Round Course was removed last night from about nine furlongs out to provide fresh ground for today – the full width of the track is needed for these starts with the number of runners we have. There are no rail changes tonight.”