Royal Ascot: Ward has 5 of 9 American hopefuls in England 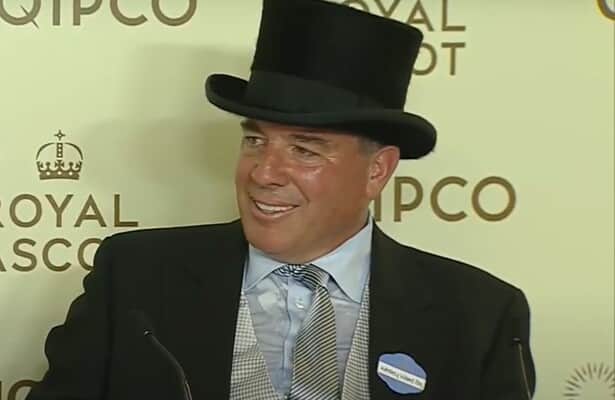 Wesley Ward did not offer even the slightest pause when he made a bold declaration about Golden Pal, the star of his string of five Royal Ascot horses this year.

“He’s the best horse that I’ve ever trained.”

Ward said that last week at Keeneland as he looked forward to his 14th annual visit to the most prestigious week of racing on the planet. Well, actually his 13th. He could not join his horses during the COVID renewal in 2020.

Even though it is a smaller group than usual, Ward still has five of the nine U.S.-based horses who are taking part in Royal Ascot 2022, which will be streamed on NBC Peacock from Tuesday through Friday, with Saturday coverage also showing over the air on NBC. The races also will be shown live on TVG.

Golden Pal brings bona fides to Tuesday’s renewal of the $615,700 King’s Stand Stakes (G1), a straight five-furlong race on opening day at Royal Ascot. It is a win-and-you’re-in qualifier for the Breeders’ Cup Turf Sprint, a race Golden Pal won last fall. In his first visit to the royal meeting, he finished a close second in the 2020 Norfolk (G2).

“He’s coming into the race as good as you would ever like to see a horse come into a race,” Ward told Horse Racing Nation. “He’s perfectly sound. He’s fit. He’s had some great works here on the grass course at Keeneland – every work better than the next.”

Ward also returns Campanelle, who was promoted by stewards to a win in last year’s Queen Mary (G2) to give Ward his 12th Royal Ascot victory. This week she will race in Saturday’s Platinum Jubilee (G1).

The twist this year is Irad Ortiz Jr. Rather than going with a mix of local jockeys such as Frankie Dettori, Ward has turned to the three-time Eclipse Award winner, who goes into his first Royal Ascot experience fresh off his Belmont Stakes triumph on Mo Donegal. Like Golden Pal, the new Belmont winner was sired by Uncle Mo.

“Frankie is my man,” Ward told Sky Sports, “but Irad is the hottest rider in America. He’s just a phenomenal rider who rides with extreme patience. He’s the man of the moment here in the States, that’s for sure.”

Ortiz will ride all five of Ward’s horses this week, when the weather was forecast by the Meteorological Office of the U.K. to be dry through Friday with rain not appearing until Saturday.

The 4-year-old colt owned by Ireland racing giant Coolmore was an early 11-4 co-favorite to win this race, which Ward won in 2017 with Lady Aurelia.

“He had a great comeback effort here winning the Shakertown (G2) at Keeneland a couple of months ago,” Ward said of Golden Pal. “Some good spacing in between races right now, so there’s no excuses for him.”

“It was kind of a head scratcher,” Ward said. “He had won a race at Saratoga (July 15 in the Quick Call, G3). It was a really, really nice win. The races might have been too close together. That’s really the only thing I can think.”

The 7-year-old gelding Nature Strip, an eight-time Group 1 winner in Australia, was the other early betting favorite at 11-4. He is trained by Chris Waller, best known for his work with four-time champion mare Winx. No other King’s Stand horse was shorter than 8-1.

Bred in Ireland, sired by US Navy Flag and owned by Barbara Banke’s Stonestreet Stables, Love Reigns won her debut April 29. She ran away to a 9 3/4-length victory in a 5 1/2-furlong maiden race on firm turf at Keeneland. That was the big reason she was made a 3-1 favorite in England to bring Ward his fourth win in this race.

“She had probably one of the best maiden wins that I’ve ever had a horse run,” Ward said. “Especially one going into Ascot, that’s for sure. Her subsequent works here at Keeneland have been great.”

In his debut last month, the Ireland-bred Belardo colt owned by Banke lost by the bob of a head in a five-furlong, $120,000 turf dash at Churchill.

“He ran a really nice race,” Ward said. “He led every fraction but the last jump. I think he’s really going to move forward with that race experience.”

Seismic Spirit was showing at 12-1 in English markets to win this listed stakes.

Little Big Bear, trained by Aidan O’Brien, was the 3-1 favorite. He broke his maiden last out in Ireland on his second try, winning by three lengths on a yielding to soft course at Naas.

In her second consecutive visit to Royal Ascot, this is a case of a girl going against the boys, something that does not raise as many eyebrows in Europe as it does in America. The England-bred Ribchester filly owned by Banke finished seventh in the 2021 Windsor Castle before coming home with an unspecified injury.

“She had an issue coming out of the race that we have taken care of,” Ward said. “They did a great job at Stonestreet bringing her back.”

Coming off her 10-month break, Ruthin won the April 15 running of the Limestone Stakes at Keeneland. That made her almost too good to be included in this race, which is limited to 3-year-olds with a peak official rating of 105. As it is, she will carry top weight of 135 pounds.

“That’s a lot of weight to carry,” Ward said, “but the race is only five furlongs. I think she’s going to have a good showing."

Ruthin was the second choice at 8-1 behind Mitbaahy, a Roger Varian-trained colt who lost six of his first seven races. That was before he won his last two starts, including a listed stakes Saturday at Sandown, England. Bookmakers made him a 7-1 favorite.

Two trips to Royal Ascot have resulted in two wins for this Kodiac filly, now 4, who is owned by Banke. At 2, she won the 2020 Queen Mary, part of her 3-for-3 start before she finished fourth in the 2020 Breeders’ Cup Juvenile Fillies Turf at Keeneland.

As a 3-year-old she crossed second last year in a wet running of the Commonwealth Cup. Twenty minutes later, stewards ruled that first-place finisher Dragon Symbol interfered with Campanelle in the deep stretch, forcing Ward’s filly to go six or seven paths out of her way. The difference between them was just a head, so Campanelle eventually was awarded the trophy.

Campanelle has raced only three times since, winning her 4-year-old debut April 16 in the Giant’s Causeway at Keeneland.

“We’re just kind of looking for the right races,” Ward said. “She’s already a Group 1 winner, and there’s not a lot of those in the States for turf sprinting.”

After her Ascot score last year, Campanelle blew the start of the Prix Maurice de Gheest (G1) at Deauville, France. She came home last fall to finish third in the Franklin County (G3) on a soft turf course at Keeneland.

“She ran a very nice third-place finish when she came charging home,” Ward said. “If there wasn’t a torrential rainstorm that day, she wins.”

After that, Campanelle spent the winter training at Ocala, Fla., where she was readied for the Giant’s Causeway – and this week’s trip to England.

“She won convincingly,” Ward said. “Her subsequent works, including a breeze (last week) here at Keeneland, were fantastic. We really look for a good showing from her on closing Saturday.”

English bookmakers made Campanelle their 7-1 second choice behind Southern Hemisphere 3-year-old Home Affairs, who was the 9-2 favorite on the strength of two Group 1 sprint victories in Australia for Waller.

Other Americans at Ascot

Four other U.S.-based horses were listed among the still standing nominees for the 35 races during the royal meeting running from Tuesday through Saturday.

Rusty Arnold trains this Munnings colt owned by Jack Goldthorpe. Late September broke his maiden on his second try, going 4 1/2 furlongs on the main track in a $120,000 race May 20 at Churchill Downs. He drew widest in the 17-horse field racing a straight six furlongs Tuesday and was shown as a 25-1 long shot. With two-time Ireland champion Colin Keane riding, this will be Late September’s first start on turf. Blackbeard, who is 3-for-3 for trainer O’Brien, and Persian Force, 2-for-2 for Richard Hannon, were the 10-3 co-favorites.

One of two Royal Ascot horses trained by Christophe Clément, this More Than Ready colt owned by Stephen Duncker won last year’s Futurity (G3) at Belmont Park on his way to finishing sixth in the Breeders’ Cup Juvenile Turf. He made his 3-year-old debut a winning one in the Palisades Stakes, a 5 1/2-furlong, $200,000 turf race on April 10 at Keeneland. In early wagering Slipstream was 10-1. Perfect Power, who won last year’s Norfolk, was the 9-2 favorite. El Caballo, winner of six in a row, was next at 5-1.

Pizza Bianca has the high-profile owner in celebrity chef Bobby Flay. But it is Spendarella who was more fancied in early betting for the Coronation.

Trained by Graham Motion, the New York-bred Karakontie filly was 12-1 on the strength of her 3-for-3 record. Last time out, the Gainesway homebred owned by Antony Beck won the Appalachian (G2) going a mile on good-rated turf at Keeneland. William Buick will have the ride on Spendarella.

The Fastnet Rock filly Pizza Bianca won last out for Clément in the 1 1/16-mile Hilltop Stakes on the Preakness undercard. She was being booked at 16-1 in England. Inspiral, who is 4-for-4 for trainers John and Thady Gosden, was the 2-1 favorite.

Breeders' Cup-bound War Like Goddess is a 12-furlong monster
Who is America's best turf horse? We may have seen...

Best Bet: With the Moonlight glows in Saratoga Oaks
Sunday’s seventh race from the Spa is the Grade 3,...

Nations Pride scores as the favorite in the Saratoga Derby
Godolphin’s Irish homebred Nations Pride made a st...
x