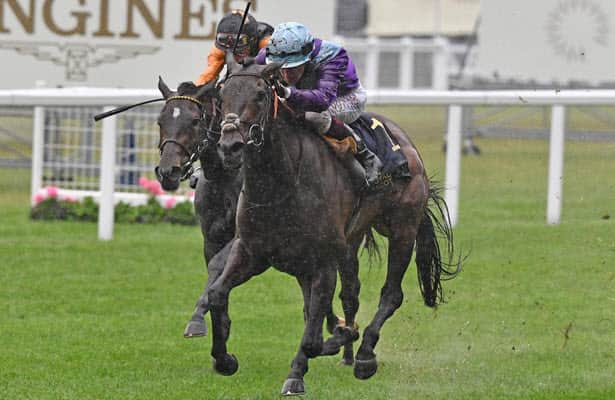 Oisín Murphy bounced back from losing a Group 1 race in the stewards’ room by winning the Coronation Stakes 40 minutes later aboard Alcohol Free (9-2).

The Andrew Balding-trained filly was fifth in the 1000 Guineas on her latest start, but turned the tables on the winner that day, Mother Earth (3-1), who finished third. Second place went to Snow Lantern (16-1), a length and a half behind the winner.

Alcohol Free, racing in the famous Jeff Smith silks, gave Balding a 109-1 Friday Royal Ascot double, and a third winner of the week. Murphy was also scoring for the third time this week, joining Frankie Dettori at the head of the leading jockey standings.

"I didn't get a chance to stress ahead of Alcohol Free," Murphy said. "I had a plan and I don't know if Andrew agreed me, but he filled me with confidence when I told him what I was going to do. Alcohol Free relaxed, I stayed on the bit for as long as I could and given her pedigree, she was always going to handle the ground."

“Alcohol Free is very classy," Balding said. "We were a bit concerned when all the rain came, because her stamina wasn’t guaranteed, but full credit to Oisín. It's the measure of the man to have the disappointment he had five minutes before they go in the stalls, and to give her such a good ride takes some doing.”

The 12-furlong contest for 3-year-old colts and males is often referred to as the "Ascot Derby," and Alenquer beat English Derby (G1) winner Adayar at Sandown Park earlier this season before having his Epsom ambitions halted by a minor hold-up.

This was the second winner of the week for trainer William Haggas, following Mohaafeth in the Hampton Court Stakes (G3), while Marquand was enjoying a second career success at Royal Ascot after being shut out in 2020.

Albany Stakes (G3). After a lunchtime inspection of the waterlogged course, day four of Royal Ascot was able to go ahead as planned, and it was the long shot Sandrine (17-1) who took the opener for 2-year-old filllies.

On the rain-softened ground over six furlongs, staying power was likely to come to the fore, and so it proved as Sandrine finished best of all to defeat Hello You (4-1) by a length and a half. Oscula (12-1), one of two fillies to take their chances on the stands’ side, was rewarded with third spot, a further half-length behind.

Sandrine was ridden by David Probert, who was registering a second Royal Ascot success and a first since 2014. Trainer Andrew Balding was saddling his second two-year-old winner of the week, following the victory of Berkshire Shadow in Tuesday’s Coventry Stakes (G2).

Sandrine’s owner-breeder Kirsten Rausing said: “I bought this filly’s fifth or sixth dam as a yearling at Goffs in 1976 and the family has been with me ever since. Everything on her catalogue page from top to bottom, we have bred at Lanwades Stud.

County Kildare-based Murtagh had much success in the saddle at Royal Ascot, registering 43 victories during a distinguished career, but his first as a trainer will have been as sweet as any of those.

An impressive victory it was, too, with Create Belief (5-1) pulling five and a half lengths clear of runner-up Samoot (8-1) in the straight mile contest. Messidor (31-1) was a farther three lengths back in third.

The 4-year-old son of Nathaniel appears to be improving quickly and showed plenty of staying power under Murphy to land the 1 1/2-mile contest. Raymond Tusk (27-1) outran his odds in second, beaten by 1 1/2 lengths, with Zabeel Champion (10-1) less than a length further back in third.

The race over five furlongs for 3-year-olds was one of six additional races to be run at Royal Ascot in 2020 and has been retained as part of the expanded seven-race daily program.

Sprint handicaps over the minimum distance are always a spectacle, and this race was no different, with the Karl Burke-trained Significantly (13-1) hanging on by a head over the fast-finishing Boomshalaa (7-1). Fantasy Master (13-1) and Dream Composer (12-1) were a half-length and a head farther back in third and fourth respectively.