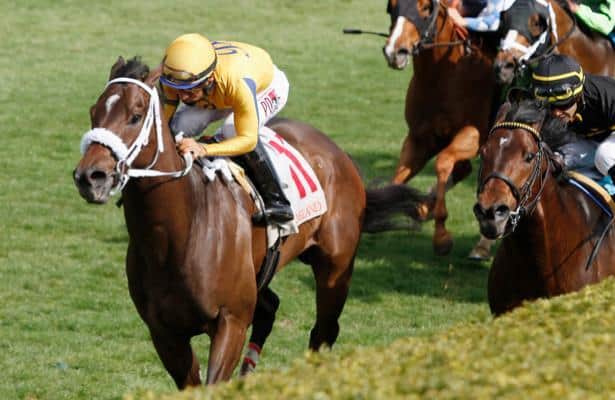 The prestigious Royal Ascot meet begins Tuesday, and we'll keep an eye on American horses and trainers over the next five days.

For domestic racing fans, the one to watch Tuesday is 5-year-old Florida-bred Imprimis. Last out, he won Keeneland's Grade 2 Shakertown Stakes on April 6.

Imprimis, a Breeze Easy LLC gelding trained by Joseph Orseno, runs in the day's third race, the Group 1 King's Stand Stakes. It's a five-furlong sprint over the Ascot turf.

Refresh this page for updates, including race replays, results and payouts from the new Royal Ascot world pool in which U.S. players will be betting.

French-bred Lord Glitters, runner-up in the 2018 Queen Anne, was one better this year. The 6-year-old gelding got his head down at the wire to edge Beat the Bank for a Group 1 score in the mile-long Ascot opener for 4-year-olds and up. Lord Glitters was ridden by Daniel Tudhope and trained by David O'Meara. Tuesday's win clinched Lord Glitters, sixth last September in the Woodbine Mile Stakes (G1), a "Win and You're In" berth to November's Breeders' Cup Mile.

Make it nine Coventry Stakes scores for Irish trainer Aidan O'Brien, whose Arizona came strong on the outside to claim the six-furlong, 2-year-old sprint. O'Brien now sports 66 overall Royal Ascot victories, second only to Sir Michael Stoute's 79. The Irish-bred Arizona was piloted by jockey Ryan Moore and crossed in 1:13.02.

Three U.S.-bred horses, Fort Myers, King of Athens and Monoski, failed to hit the board.

Aidan O’Brien and Ryan Moore are on the board at #RoyalAscot 2019 – No Nay Never colt Arizona wins the Coventry Stakes! @Ascot pic.twitter.com/THhCgbhd0W

Blue Point became the 12th horse to win the Group 1 King's Stand twice when, for the second year in a row, the Irish-bred Charlie Appleby trainee crossed one spot ahead of runner-up and rival Battaash. Under jockey James Doyle, 5-year-old Blue Point went five furlongs in 58.53 seconds. Blue Point is campaigned by Godolphin LLC and has 10 career victories, eight of which have come in group company.

American runner Imprimis, a 5-year-old, Florida-bred gelding, failed to hit the board.

Déjà vu in the King's Stand! What a horse - Blue Point beats Battaash once again in the big Group 1 @Ascot sprint! #RoyalAscot pic.twitter.com/DyVy7dRL3t

Moore and O'Brien scored for a second time Tuesday as Circus Maximus held off a late charge from fellow Irish-bred King of Comedy to win the St. James's Palace. Circus Maximus posted a time of 1:39.90 over one mile to claim the Group 1 event for 3-year-old colts. O' Brien now owns eight St. James's Palace victories and 67 overall Royal Ascot triumphs.

Tough, talented and now a winner at #RoyalAscot like his sire Frankel - The Grand Visir wins the Ascot Stakes for @RKingscote and @ianwilliamsraci!

Tudhope, who opened Tuesday's action with a win in the Queen Anne, bookended the first day of Royal Ascot by piloting Irish-bred Addeybb to a victory in the Wolferton, a 1 1/4-mile listed stakes for horses 4 and up. Addeybb, a previous Group 2 winner, is conditioned by William Haggas. Magic Wand, whose three U.S. starts include a third last out May 11 in Belmont Park's Man o' War Stakes (G1), finished second.

Mountain Hunter, a U.S. bred gelding campaigned by Godolphin LLC, missed the board.

He loves the mud! Addeybb is a class apart and bolts up in the Listed Wolferton Stakes. A #RoyalAscot double for Danny Tudhope and a winner for William Haggas! pic.twitter.com/B73o2g1bLf