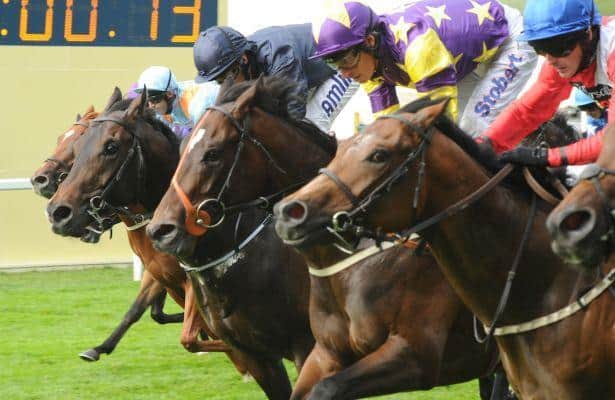 Day four at Royal Ascot will start with American trainer Wesley Ward aiming for his first victory of the 2019 meet. He has two 2-year-old fillies, Chili Petin and Nayibeth, running in the day's first race, the Group 3 Albany Stakes.

Jockey Frankie Dettori has mounts in five of Friday's six Ascot races. He'll look to build on a marvelous performance Thursday that saw him win four races, including the Group 1 Gold Cup.

Wesley Ward-trained Nayibeth was one of the early pace setters, but she tired in the final furlongs as Daahyeh won the day's first race. Nayibeth, with American jockey Joel Rosario aboard, missed the board. So too did Ward's other filly in the race, Chili Petin, who was piloted by John Velasquez. Daahyeh is trained by Roger Varian and was ridden Friday by 20-year-old David Egan, who picked up his first Royal Ascot win in 1:14.05 over six furlongs.

Too good - Daahyeh wins the Albany Stakes and looks a super filly for the future! What a result for young jockey David Egan and @VarianStable!#RoyalAscot pic.twitter.com/2YezOxzyvw

Third in the Epsom Derby three weeks ago, Japan was two better Friday in the King Edward VII Stakes. He came from the back and then strong on the outside to win comfortably over runner-up Bangkok. The Royal Ascot score was trainer Aidan O'Brien's 70th and jockey Ryan Moore's 57th. Moore's four wins this week are second only to Frankie Dettori's six.

Wow! Japan is a class apart as he wins the King Edward VII Stakes for Ryan Moore and Aidan O’Brien… #RoyalAscot pic.twitter.com/gAqqg5HW6v

One day after collecting four Royal Ascot scores, Frankie Dettori is back on the board with a Group 1 win aboard Advertise in the six-furlong Commonwealth Cup. Dettori now has seven victories this week at Ascot, matching his personal best from 1998 and two off Ryan Moore's record nine. "Unbelievable" is how Dettori described his week. Martyn Meade trains Advertise, who topped runner-up Forever In Dreams. Post-time favorite Ten Sovereigns missed the board, becoming the first favorite Friday not to win.

Advertise is back with a bang and wins the Group 1 Commonwealth Cup for trainer @MMeadeRacing! The winning jockey? Frankie Dettori of course!#RoyalAscot pic.twitter.com/D1vrcP6feO

French-bred filly Watch Me powered by Aidan O'Brien-trained favorite Hermosa to score in the Group 1 Coronation. Jockey Pierre-Charles Boudot piloted the long shot to a victory over a mile in 1:39.61. Watch Me's win was trainer Francis-Henri Graffard first-ever at Royal Ascot. Watch Me became the 12th French horse to claim a Coronation crown.

A victory for France! Watch Me causes a bit of an upset and wins the Coronation Stakes for @PCBOUDOT and @GraffardRacing… pic.twitter.com/4MPU5K7eXy

Hayley Turner became just the second female jockey to win a Royal Ascot race when her mount, Thanks Be, emerged from a 28-horse field to win the Sandringham. The only other woman to win a Royal Ascot race was Gay Kelleway in 1987. "It was only a matter of time," Turner said of a second female rider finally winning at the meet. Thanks Be, trained by Charlie Fellowes, went one mile in 1:39.61.

Ryan Moore scored a thrilling victory over rival jockey Frankie Dettori in the final Friday race at Royal Ascot. French-bred Baghdad, with Moore aboard, edged Dettori's hard-charging Ben Vrackie at the wire by a nose. Baghdad has won Royal Ascot races two years in a row, also claiming the King George V Stakes last year for trainer Mark Johnston. Moore now has five wins at this Royal Ascot meet, second only to Dettori's seven. The all-time record for wins at a single Royal Ascot belongs to Moore, who won nine times in 2015.

What a training performance! It’s back-to-back Royal @Ascot wins for Baghdad as he takes the Duke of Edinburgh Stakes under Ryan Moore for @Johnston_Racing pic.twitter.com/FMeXTUH0TY