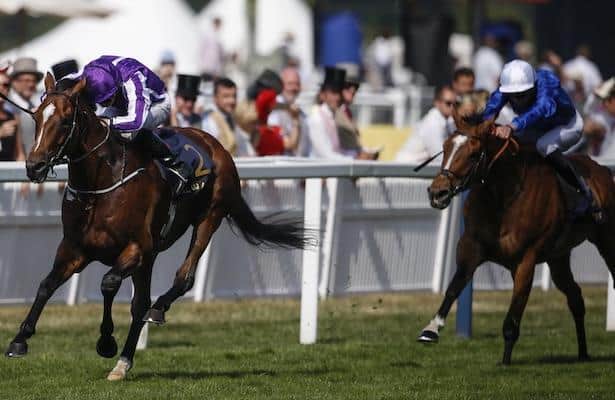 Day 2 of the 2017 Royal Ascot meeting kicked off with the Royal Procession once again, with the Queen dressed in a buttercup yellow hat and joined by Prince Charles in the first carriage.

Her Majesty The Legend, arriving @Ascot a few minutes ago. pic.twitter.com/EtZS7OXoMg

The Queen had already had a busy morning, giving her speech at the opening of Parliament before a wardrobe change and trip out to the race course.

The Jersey Stakes began the racing action, and French invader Le Brivido (9-5) nabbed the victory for trainer Andre Fabre. Spirit of Valor made a game charge at Le Brivido, but the three-year-old colt by Siyouni hit another gear to hit the wire first, finishing the seven furlongs in 1:25.05. Pierre-Charles Boudot rode Le Brivido to the Jersey Stakes score, who is owned by Prince Faisal bin Khaled bin Abdulaziz. Spirit of Valor was second, and Mubtasim third.

75 members of Hot to Trot Racing Club experienced an emotional victory when their two-year-old filly, Heartache (2-1), drew clear to win the Queen Mary. The two-year-old Kyllachy filly ran the five furlongs in :59.63 under jockey Adam Kirby. American-based Wesley Ward's Happy Like A Fool (3-5) ran a good second, followed by Out Of The Flames.

Ward’s Lady Aurelia won the Queen Mary last year, and this year had a sizzling win in the G1 King’s Stand.

Last year’s G1 Coronation Stakes winner, Qemah (2-1 USA, 5-2 GB), came back as a four-year-old to win the Duke of Cambridge for trainer Jean-Claude Rouget. Al Shaqab’s Danehill Dancer filly was guided by Gregory Benoist and took the straight mile in 1:38.34. Aljazzi made a strong bid to be the runner-up, with Usherette third.

Highland Reel (9-4 GB, 2-1 USA) notched his sixth Group/Grade 1 win in a thrilling Prince of Wales’s Stakes. Ryan Moore kept the Galileo star in second and turned him loose in the homestretch. The five-year-old horse, trained by Aidan O’Brien, began to unwind and powered home to finish the near 1 ¼ miles race in 2:05.40. Decorated Knight nosed out Ulysses for second, and Queen’s Trust was fourth.

What a FIGHTER! The brilliant HIGHLAND REEL never knows when he is beaten and lands the Prince of Wales's Stakes at #RoyalAscot. pic.twitter.com/7y7xJm7ffu

In a field of 29, Zhui Feng (25-1 GB, 16-1 USA) emerged as the Royal Hunt Cup winner. Jockey Martin Dwyer made sure Zhui Feng broke clean and was not bottled up behind an endless wall of horses, allowing him to ask his mount to go when the time came. Amanda Perrett trains the four-year-old Invincible Spirit colt for John Connolly and Odile Griffith. Blair House and Tashweeq finished a close respective second and third. Zhui Feng ran the straight mile in 1:37.82.

In another straight mile at Ascot, U.S.-based Con Te Partiro (20-1 GB, 19-1 USA) exploded in the 24-horse field to take the Sandringham Handicap. Wesley Ward trains the three-year-old filly, who was ridden by Jamie Spencer and is owned by Hat Creek Racing. Like Lady Aurelia, Con Te Partiro is also sired by the late Scat Daddy. Rain Goddess and Paco’s Angel closed for second and third respectively, but could not hold off the winner rolling home. Con Te Partiro hit the wire in 1:38.84. Con Te Partiro is Ward's ninth career winner at Royal Ascot.

Royal Ascot continues tomorrow morning and runs through Saturday. NBCSN will broadcast the races daily from 8:30am – 1pm ET.

"My horse was scared by all the Fascinators"#RoyalAscotTrainerExcuses

Heartache, trained by Clive Cox, proves too good for hot favourite Happy Like A Fool in the Queen Mary at #RoyalAscot under Adam Kirby. pic.twitter.com/emBmeMSaNI

1-2-3 for Galileo in a thrilling G1 Prince Of Wales's Stakes as the mighty Highland Reel wins from Decorated Knight & Ulysses #CoolmoreSires pic.twitter.com/bZVy7dQ8la

How about that Highland Reel? He was wet in the paddock, but spectacular on the track! pic.twitter.com/nB2DuWRbMH

Scat Daddy is the first stallion this year to have two Royal Ascot winners. Sioux Nation is his only runner tomorrow (Norfolk Stakes).