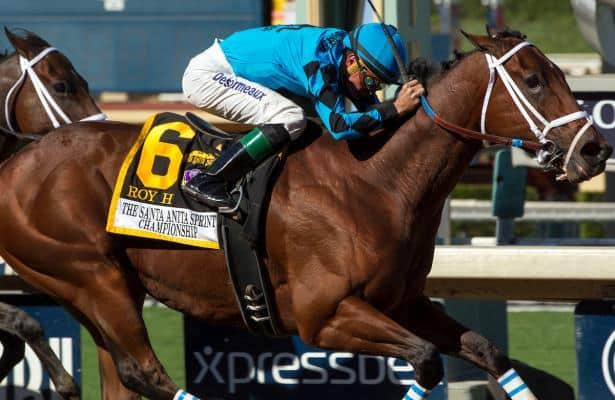 Trained by Peter Miller and owned by Rockingham Ranch and David Bernsen, Roy H has been idle since taking his second consecutive Breeders’ Cup Sprint on Nov. 3 at Churchill Downs. A 7-year-old gelding by More Than Ready, Roy H was among the most impressive winners on Breeders’ Cup Saturday, as he won by 3 1/4 lengths while posting a lofty 111 Beyer Speed figure — matching his career-best rating. A winner of last year’s Palos Verdes, he’s bidding for his third consecutive win under Florida-based Paco Lopez.

Here's a look at the competition:

Third to McKinzie four starts back in the Grade 2 San Felipe Stakes here on March 10, this 4-year-old colt by Jimmy Creed was subsequently well beaten in the Grade 2 Blue Grass Stakes at Keeneland April 7. Subsequent to that, he cut back in distance to seven furlongs and rallied to take the Grade 3 Lazaro Barrera Stakes at Santa Anita on May 12 and was then idle prior to finishing six lengths behind McKinzie in the seven-furlong Malibu, a Grade 1 on Dec. 26. With a recent race to his credit, Kanthaka, who will be handled by leading man Flavien Prat, should be set to bring his best in the Palos Verdes.

This venerable 7-year-old Florida-bred gelding will be making his 35th career start and has to be accorded a puncher’s chance. Fresh off a gutty head victory in a five-furlong classified allowance at Los Alamitos on Dec. 14, he was haltered by Sadler for $62,500 on May 28 and has been a gem of consistency in five subsequent starts. With wet weather forecast through Thursday, St. Joe Bay would appreciate any sort of off track, as he posted a 1 ¾-length win in the Grade 3 Midnight Lute Stakes here over a sloppy surface in December of 2016. Look for him to press the early issue on Saturday as he shoots for his fourth win in 13 local tries. With an overall mark of 34: 6-7-6, he has earnings of $610,515.