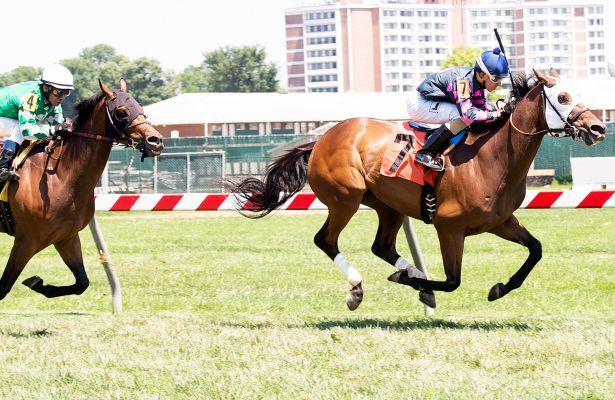 Though he has raced and won at multiple tracks up and down the East Coast, Panic Stable’s Rose Brier is never more at home than in Maryland. The 7-year-old gelding has made four of his 34 career starts at both Laurel Park and historic Pimlico Race Course, all of them wins, each of them in stakes.

On Saturday, Rose Brier will look to keep his perfect Maryland record intact with a third straight victory in the $60,000 Bert Allen Stakes at Laurel. The Bert Allen for 3-year-olds and up is one of five supporting turf stakes restricted to Virginia-bred/sired horses on the 11-Commonwealth Day program and two contested at 1 1/16 miles, along with the Brookmeade for females 3 and up.

Trained by Jane Cibelli, whose summer base is at Monmouth Park, Rose Brier was favored in each of his Bert Allen victories, which came by 3 ¼ lengths in 2014 and two lengths last year. He also won the one-mile Henry S. Clark in April to make him three-for-three over Laurel’s world-class turf course, and captured the Edward P. Evans for Virginia-breds June 25 at Pimlico.

“He seems to really enjoy Maryland. It’s funny, because he likes every turf course except the one that he’s stabled at for some reason,” Cibelli said. “When you watch him, visually he just doesn’t really finish as well at Monmouth as he does other places. Maybe he just likes to ship. There are horses, you know, that just like to get on a van. Maybe he’s one of them.”

Rose Brier was third by a length in the Red Bank (G3) at Monmouth prior to the Evans, which he followed by finishing third by less than a length to subsequent stakes winner Watchyourownbobber in a stakes at Mountaineer Park Aug. 6, his most recent effort.

“We’ll have a target on our back there. They’re going to be out to get him,” Cibelli quipped. “He seems like he’s doing well so we’ll see how it goes. He came out of the last race excellent, no problems at all. It’s a horse race and we’ve all had favorites that got beat. It happens all the time. They’re all beatable.”

Cibelli has been careful in managing the campaign for Rose Brier, a son of multiple graded stakes winner Mizzen Mast who has yet to win himself in graded company. In addition to this year, he was fourth in the Red Bank in 2014 and 2015 and fourth in the 2015 Tampa Bay Stakes (G3).

“Rosie is the kind of horse that if you space his races out and give him enough time in between he does well. He’s not the kind of horse where you can bang him back in two weeks,” Cibelli said. “He’s had plenty of time for this race, and he needs this time. He’s an old man now, he’s 7 years old. He’s no spring chicken. I actually gave him time off last winter because he’s been in training forever and he was running well. It’s kind of hard to give a horse time off when they’re running well but you’ve got to at some point.

“You could see he wasn’t training quite the same so we gave him three months off and turned him out up here in Jersey. Actually the lady at the farm called us and said, ‘You’ve got to pick him up. He’s driving me nuts. He’s ready to go back,’” she added. “We got him back and he was wild. He wanted to go back to work. He’s a cool kind of horse. I don’t know if he’ll ever win a graded stake or anything. He’s certainly run well against graded horses, that’s for sure. He always shows up. As long as you do right by him, he’ll do right by you.”

Trevor McCarthy, aboard for all three of Rose Brier’s Laurel stakes wins, gets the return call at topweight of 122 pounds from Post 7 in the nine-horse field.

Chester Prince’s Dannhauser, third to Rose Brier the past two years, will take another shot in the Bert Allen. Trained by Kathleen O’Connell, the 8-year-old Johannesburg gelding won the Bert Allen in 2013, the last year it was run at Colonial Downs, and also won the 2012 Laurel Turf Cup. Sheldon Russell rides from outside post 9 at 118 pounds.

Complete St. Back to Defend Title in $60,000 Brookmeade

Harlan Crossman’s Complete St., winless in five starts this year, returns to the scene of her last victory in an attempt to defend her title in the $60,000 Brookmeade.

The 6-year-old mare has finished third or better once this year, also dead-heating for fifth with fellow Brookmeade contender Gem in the 1 1/16-mile Nellie Mae Cox for Virginia-bred/sired horses June 25 at Pimlico.

Charles Wilson’s Secret Or Not, second by a length to Queen Caroline in the Nellie Mae Cox, and Wesley Ward-owned and trained Hooligan, another 1 ¼ lengths back in third, are also among the returning players in the Brookmeade.

Secret Or Not, breaking from post 1 in a field of 10, and Hooligan, who drew post 8, have each made one start since the Nellie Mae Cox, exiting the same 1 1/16-mile optional claimer July 23 at Laurel where Silver Or Not was second by a neck with Hooligan finishing eighth. A 4-year-old Exchange Rate filly, Hooligan is also entered in the $60,000 Oakley, contested at 5 ½ furlongs later on the card.

Rounding out the field are Andrasta, winner of a 1 1/16-mile claiming event Aug. 5 at Laurel for trainer Hamilton Smith; Magician’s Vanity, second by a neck in a 1 1/16-mile allowance Aug. 20 at Laurel; Drop Dead Red, second in back-to-back allowances since being claimed July 2; Atlanta Babe, My Dinah Lee and Skipalute.