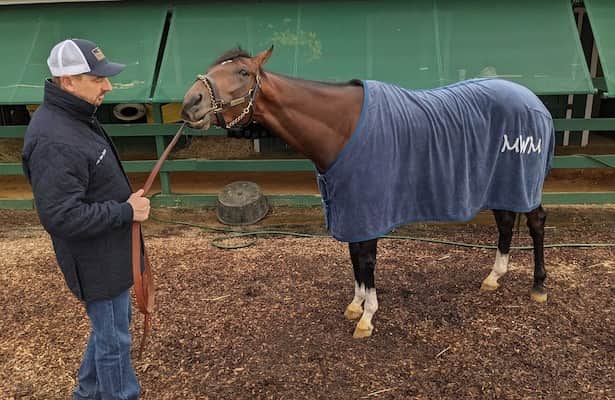 The Grade 1, $1 million Belmont Derby Invitational on July 10 is unlikely for Rombauer and the $1 million Haskell Stakes (G1) a week later is "50-50," owner-breeder John Fradkin said after the Preakness winner worked Friday at Santa Anita.

In his second work since finishing third in the June 5 Belmont Stakes, Rombauer completed five furlongs in 1:01 flat on a track listed as fast. Requests for comment from trainer Michael McCarthy were not immediately returned.

McCarthy had previously indicated putting Rombauer back on turf in next week's Belmont Derby was a possibility, but Fradkin said the trainer believes it may be too soon.

"Since the Haskell is only a week later, I would estimate that we are only 50/50 to go there," Fradkin told Horse Racing Nation via text message. "In summary, we have no definitive plans yet."

Rombauer's 3 1/2-length score in the Preakness was his first in a Grade 1 and first on dirt. Previously, he won the El Camino Real Derby on a synthetic track at Golden Gate Fields and got his maiden win on turf.