Rombauer runs down the early speed to win Preakness 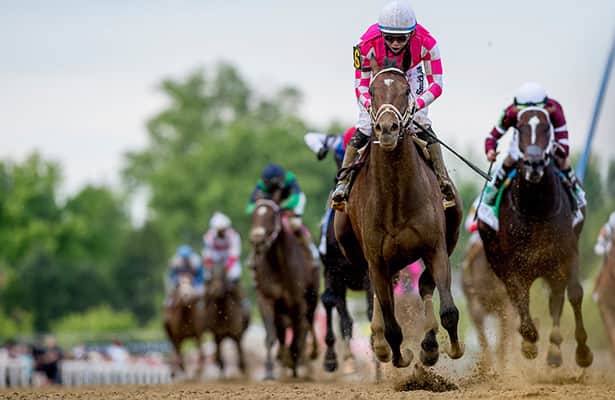 Instead, a feel-good story is coming out of Pimlico about a pair of owners who disagreed with their trainer about going to the Kentucky Derby and settled on the Preakness Stakes instead with a horse they would have sold if not for a clock that did not work right.

John and Diane Fradkin overruled Mike McCarthy, skipped the trip to Louisville and took the free Preakness entry that their homebred colt Rombauer earned by winning an ungraded stakes race in northern California during the winter.

“We had a pretty heated discussion about that,” John Fradkin said. “Let’s just leave it at that.”

Now Rombauer is not just an El Camino Real Derby winner. He is a Preakness winner with plans for him to be in next month’s Belmont Stakes.

Biding his time in mid-pack behind an honest pace set by tainted Kentucky Derby winner Medina Spirit in tandem with Midnight Bourbon, jockey Flavien Prat made a decisive move on the backstretch. Rombauer picked off horses one by one en route to an 11-1 victory on a sun-drenched, 75-degree afternoon at Pimlico Race Course.

“Just really surreal. All of it,” said McCarthy, who was training for the first time in a Triple Crown race. “Watching live, going back to the Jumbotron, when he hit the front, I don’t think I said a word. I certainly didn’t root. At least I don’t think I did.”

The early pace proved hot enough for Rombauer to target, and too much for the pacesetters to maintain.

“He took it to Medina Spirit,” Midnight Bourbon’s trainer Steve Asmussen said. “Medina Spirit was the horse. We kept him honest.”

In doing so, though, the race set up for a closer. Prat kept Rombauer in sixth place through the first half of the race before he shook the reins with about a half-mile left in the 1 3/16-mile trip. By the top of the stretch, Rombauer and Midnight Bourbon were head to head, but there was little doubt what was about to happen.

“I was behind the two favorites in the race,” Prat said, “and I was traveling well. I thought if he gave me a good kick, I might be able to run them down.”

McCarthy was thinking the same thing. Kind of.

“At the eighth pole,” he said, “it was like an out-of-body experience.”

The race began with Medina Spirit breaking well under John Velázquez and going to the early lead. But unlike the Derby, he was challenged by Midnight Bourbon, who got away a lot better with Irad Ortiz Jr. than he did at Churchill Downs with Mike Smith.

“He was away beautifully,” Asmussen said. “When he went under the wire for the first time I was thinking I wish the Derby had been like that. He ran really hard. He really did.”

The Japanese shipper France Go de Ina (24-1) put in a bid for the lead, pulling within a length of Medina Spirit before fading in the second turn on his way to finishing seventh.

By then Rombauer was lurking four wide, moving within a head of Midnight Bourbon at the top of the stretch. That was when Prat went to the left hand to urge the Twirling Candy colt home.

“He was pretty on his toes before the race,” Prat said. “The groom and pony girl who were with me, they did a good job, and we tried to get him to relax, and it worked out well.”

The result took a lot of pressure off racing itself, especially the loss by Medina Spirit. Although he was clean in three drug tests since last week, his positive for betamethasone at the Kentucky Derby still hangs over his head. Since a second failed test of his post-Derby blood sample is all that separates him from disqualification, a Triple Crown bid next month at the Belmont Stakes would have been troubled at best and a media firestorm at worst.

After doing one interview after another early in the week, Medina Spirit’s trainer Bob Baffert kept a low profile at the end. He issued an apologetic statement to NBC Sports on Saturday, and it was not known right away whether he would send any horses – or himself – to New York next month for the Belmont.

McCarthy, meanwhile, is ready to roll to Long Island with Rombauer.

“You’d have to think so,” he said. “See how he comes out of it, and we’ll take a good look tomorrow.”

“I thought that was our best chance of a race to win was actually the Belmont,” Fradkin said. “I think he’s going to like the distance.”

That is a much rosier view of Rombauer’s future than Fradkin had last summer at Del Mar.

“The first reports weren’t positive,” he said. “I was hearing he had no speed, and that’s really not what you want to hear when you want to win early with a 2-year-old. We ran him July 25 in a maiden special weight, one mile on the turf, and he won really impressively. I thought actually that right after that race there would be some big offers on him, and we might sell him, but there weren’t any.”

That is because Rombauer got only a 48 Beyer Speed Rating from the Daily Racing Form. Blame that not on the horse but on an inaccurate time from the new Gmax system that had just been installed at Del Mar.

“Two weeks later we found out that the times were actually off,” Fradkin said. “That was another lucky break, because if the real time was given to the horse, he probably would have sold him.”

A faulty clock. A disagreement with a trainer. And a free entry to a Triple Crown race that came with winning a little stakes race on a synthetic track in Berkeley, Calif.

Who knew Preakness winners were made of all that?