Romans is excited for Giant Game after Breeders' Cup 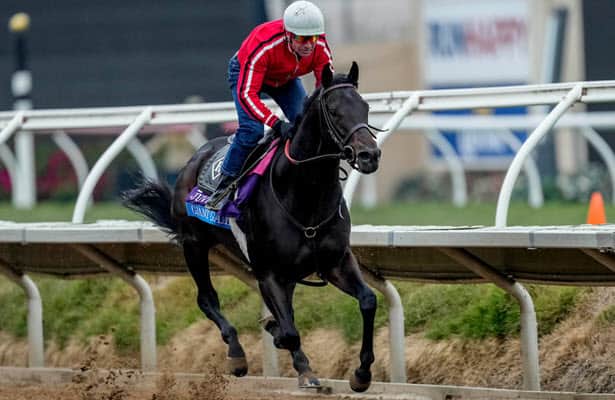 At the top of the Del Mar stretch in the Nov. 5 Breeders’ Cup Juvenile, it appeared long shot Giant Game had a big chance to win. Trainer Bob Baffert's favorite Corniche was out front, but Giant Game had found his best stride.

“He gave me a big thrill around the turn,” Romans said.

In the end, Giant Game did not quite have enough to finish the task, as Corniche ultimately prevailed with Pappacap in second. Still, Romans said thought his colt, a 22-1 long shot, ran exceptionally well to be third by 2 1/2 lengths.

“I told (jockey Joe Talamo) we wouldn’t be very far off of him and to try and attack early,” Romans said. “I know we didn’t want to try and have to run him down from the eighth pole, it’d be better off if we went up and looked at him at three-eighths. He put himself in position, it just wasn’t quite enough to get him home, but I think he’s got a lot of room to improve.”

Giant Game, a son of Giant's Causeway owned by West Point Thoroughbreds and Albaugh Family Stables, was purchased for $500,000 at the 2020 Fasig-Tipton selected yearlings showcase.

Romans said the colt was on his team’s short list for him to inspect, and when he did, he was sold.

“When he walked out of the barn looking at how he looked, that’s a no-brainer,” Romans said. “All the parts in the right places, very well balanced, athletic look.”

The colt trained with fellow 2022 Kentucky Derby aspirant and stablemate Howling Time. As the two developed throughout the year, their trainer was impressed, calling them both “extremely smart.”

After Giant Game broke his maiden at Keeneland in October, Romans decided to send him to the Breeders’ Cup, where he earned four qualifying points towards entry in the 2022 Derby.

The colt came out of the Breeders’ Cup in good order. Romans said the plan now is to “take it easy” for the rest of the year, before beginning his Derby quest in earnest starting in 2022.

Romans said Giant Game could tentatively run in Florida next.

“The Holy Bull is always sitting out there, that’s one to think about when we're at Gulfstream,” Romans said. “I never etch in stone any Derby prep, I etch weekends that we want to run instead of races.”

The trainer expects continued growth from Giant Game this winter, inferring he is not simply a precocious 2-year-old.

“Unless you’re a true superstar when you’re winning as a juvenile, I think that some of them are just more mature and ahead of the curve,” Romans said. “But with a horse that has room to get better, I think you’re always better off.”

On Saturday, Romans will have one of the longtime standouts of his stable, Sally’s Curlin, running in the $300,000 Chilukki Stakes (G3) at Churchill Downs. The 5-year-old Curlin mare won the race in 2019.

Sally's Curlin finished second in her most recent trip, an allowance race at Keeneland last month.

“She’s gone through a little lull, but that last race at Keeneland, it looked like she’s revived herself,” Romans said. “We’re expecting her to run very big in the Chilukki.”