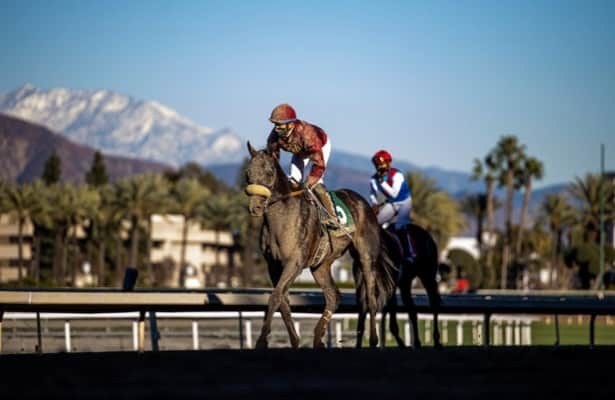 Roman Centurian was beaten 12 1/4 lengths by Life Is Good in his debut race last Nov. 22, but after an impressive maiden win and a bang-up second by a neck to Medina Spirit in the Robert B. Lewis Stakes on Jan. 30, Simon Callaghan is gearing up the $550,000 son of Empire Maker for another go at Life Is Good in Santa Anita's Grade 2 San Felipe Stakes on March 6.

“He’s a very talented horse, and I think the San Felipe will be a very interesting race,” said Callaghan, who conditions Roman Centurian for breeders Don Alberto Corp, which owns the colt along with Qatar Racing Limited.

“I think the San Felipe will reveal a lot, but again, Roman Centurian is a very good horse. I’m happy with him and looking forward to the race.”

Juan Hernandez, who rode Roman Centurian in the Lewis, will be back aboard in the San Felipe, Callaghan said.

Hernandez was in the irons Saturday morning for a five-furlong workout in 1:00.40. “I was very happy,” Callaghan said. “It was a typical breeze for him. He moved good and finished up really well.”

Roman Centurian had an eventful trip in the 1 1/16-mile Lewis, trailing in the field of six after a half-mile, going five wide into the stretch, and bumping third-place finisher Hot Rod Charlie at the eighth pole.

According to the Equibase chart, Roman Centurian “could not get by the winner,” Medina Spirit, who, like Life Is Good, is trained by Bob Baffert.

“I think he’s always going to have that style of closing,” Callaghan said, “but he definitely covered more ground in the Lewis and was kind of bumped; that didn’t help him.

“It’s five weeks from the Lewis to the San Felipe, so we’re going to see some progression in our horse. There’s lots of blue sky ahead of him.”

The San Felipe is a major steppingstone to the $750,000 Santa Anita Derby (G1) on April 3 and offers 50 Kentucky Derby qualifying points to the winner, 20 to the runner-up, 10 to the third-place finisher and five to the fourth. The race was won last year by Authentic, who would go on to be named Horse of the Year.

Life Is Good is the 7-1 individual favorite in Pool 3 of the Kentucky Derby Future Wagering, while Roman Centurian is listed at 41-1. The mutuel field is favored at 3-1.