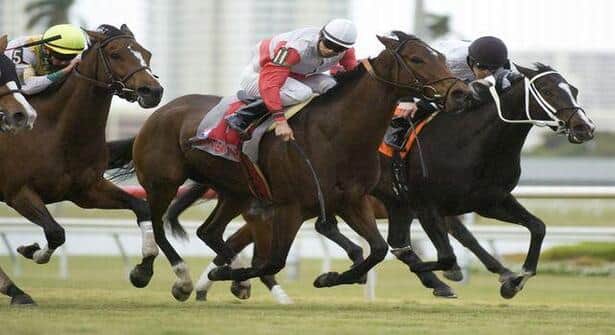 Frank Calabrese’s 6-year-old mare Romacaca is a veteran Graded turf stakes performer with earnings of more than $850,000 and appears to be a solid favorite in a full field of 13 fillies and mares drawn for Sunday’s $100,000 South Beach Stakes at Gulfstream Park to be run at 7 ½ furlongs on turf.

Regular jockey Francisco Torres rides the Florida-bred daughter of Running Stag for trainer Danny Miller. Romacaca comes into the South Beach in her first start since posting an impressive wire-to-wire score last out in the Indian Maid Stakes at Hawthorne on Oct. 6. In July she won the Modesty Handicap (G3). Since the Indian Maid she was consigned and went through the sales ring at the Fasig-Tipton November sales on Nov. 5, but didn’t meet her reserve and was returned to Miller’s care.

“She missed a couple of weeks of training for the sale, but that won’t be a problem. When she breezed the other day, ‘Cisco’ said she had never gone any better for him,” said Miller, who is guiding the mare’s racing career for the second time.

Romacaca made the first four starts of her career at Gulfstream in early 2009, breaking her maiden in her third start. She was claimed for $25,000 by Calabrese when winning for the second time on April 17. She won her next three starts for Miller at Arlington Park, including two small stakes, and finished a solid second in the Pucker Up Stakes (G3) in her first Graded stakes appearance.

Another veteran Graded stakes-winner in the field with experience over the course is Mark Hoffman, Earl Trustud and Estate of Gail Gee’s 6-year-old Hooh Why, second in the South Beach late last year and winner of the Sunshine Millions Filly & Mare Turf in late January. Jockey Ron Allen, Jr. rides the Florida-bred daughter of Cloud Hopping with earnings of more than $1.1 million.

Hooh Why has traveled far and wide throughout the east and mid-west by van behind a truck with co-owner Mark Hoffman at the wheel. Hoffman has also been the trainer of record on several occasions during a career highlighted by a 24-to-1 upset victory in the as a 3-year-old in the 2009 Ashland Stakes (G1) at Keeneland. She has made her last two starts at Calder, finishing a close-up fourth in the My Charmer Handicap (G3) on Nov. 22 for trainer David Fawkes, but will run for trainer Nick Gonzalez in the South Beach.

A lightly-raced, well-bred filly that has shown potential and could be a threat in the field is Helen Alexander, Dorothy Matz and Helen Groves’ Kentucky homebred 3-year-old filly Assateague, a daughter of turf stakes winner Amelia, whose dam Aquilegia was a multiple Graded stakes on turf. Aquilegia’s dam was Courtly Dee, the legendary former Broodmare of the Year.

Trained by Michael Matz, Assateaugue broke her maiden in her third start on turf at Keeneland in October last year and didn’t race again until scoring in a turf allowance over the Saratoga course in July. Third in the Pebbles Stakes at Belmont in early October, she makes her first start since an even fourth-place try in the Raven Run Stakes (G2) on Polytrack at Keeneland on Oct. 20.

“She’s a nice filly and has a lot of ability, but she’s a little tricky to handle,” said Matz. “She just wants to be too aggressive in the beginning. Hopefully, she’ll get that figured out.”