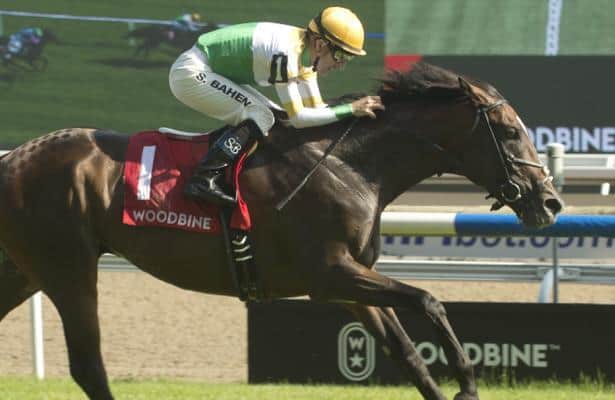 Trainer Roger Attfield, who won five consecutive editions of the turf race, and eight overall runnings, will look for back-to-back Singspiel victories with Tiz a Slam.

Inaugurated in 2005 as a 1 ½-mile grass marathon, the Singspiel, for three-year-olds and up, will now go as a 1 ¼-mile race, still contested over the E.P. Taylor Turf Course.

After three stakes triumphs last year, including the Louisville (G3) at Saratoga in May, and the Nijinsky (G2) at Woodbine in July, Tiz a Slam has finished fourth, seventh, along with a pair of sixth-place efforts in his two most recent outings.

Attfield is hoping the six-year-old son of Tiznow can get back on track and into the winner’s circle with a second straight Singspiel title.

"He hasn't been the horse he was last year but right now he's training as well as he ever has,” said the veteran conditioner.

Tiz a Slam, bred and owned by Chiefswood Stables, was sixth in his latest engagement, the 1 1/16 mile main track Seagram Cup (G3), on July 26 at Woodbine.

A winner of nine races from 30 starts, Attfield believes the bay millionaire will appreciate the return to turf.

He doesn’t see the shorter Singspiel distance as an issue.

"I don't think it matters much. I've never been totally convinced he was a mile and a half horse.”

The race is named after the Irish-bred son of In the Wings, whose nine victories in 20 lifetime starts include the 1996 Canadian International Stakes.

Scheduled as race 10, one race after the Mile, the Woodbine Cares Stakes has drawn seven two-year-old fillies.

Contested at five furlongs on the E.P. Taylor Turf Course, the race features Dirty Dangle, who won her debut for trainer Ralph Biamonte, Forest Drift, also a winner first time out, and Live Oak Plantation’s Souper Munnings, who has posted a win and a second in her first two outings.

Last year, Fast Scene took the inaugural running of the race in a time of :56.96. The Kentucky-bred daughter of Fast Anna is owned by Blazing Meadows Farm LLC and Three Chimneys Farm LLC.

Credit River will make his debut in the Ontario Racing, Wesley Ward trainee Amsden looks to go two-for-two to start his career, and Quick Tempo heads north off a strong curtain-raising effort at Arlington on August 20, winning a 4 ½-furlong dash over the main track.

Old Chestnut won the inaugural running of the race last year, notching a 3 ¾-length triumph in a time of :56.85 on the Inner Turf.