Rodriguez on facing Gamine: 'Everybody's got a chance' 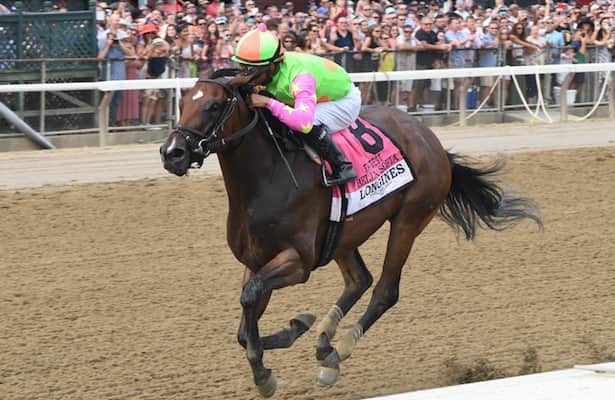 Only four fillies and mares are lined up to take on the fearsome Gamine in the Breeders' Cup Filly & Mare Sprint on Saturday at Del Mar after the withdrawal of Estilo Talentoso.

Few might argue that Bob Baffert's champion is unbeatable, but nobody has done it this year. As a result, Gamine is the prohibitive 3-5 favorite on the morning line for the Filly & Mare Sprint.

[Related: 3 big favorites that can lose on Breeders' Cup Saturday]

The other four trainers in the race might have plenty to worry about, but that does not seem to be the case for Rudy Rodriguez, trainer of Bella Sofia.

As the 5-2 second-choice on the morning line, Bella Sofia enters with prominent credentials of her own having won both the Test (G1) and the Gallant Bloom (G2) in her two most recent starts. Jockey Luis Saez, who rode her in both of those wins, will be in the irons again on Saturday.

Bella Sofia arrived at Del Mar on Saturday and worked four furlongs in 48.4 seconds on Sunday.

"She's coming up in the best way possible," Rodriguez said. "She seemed to adapt herself pretty good in Del Mar. We are so happy to be here. I'm going to just relax and enjoy the ride with Luis. Luis is supposed to be in charge of her. He knows her very well. And I just try to stay out of his way. I did my part. I'm just trying to enjoy everything now."

Bella Sofia will be the only 3-year-old in the race, but she has faced older competition in three of her five races: when she broke her maiden on debut in May, in an allowance race in July and in the Gallant Bloom. Her only loss came in the listed Jersey Girl Stakes at Belmont in June.

Rodriguez might be happy to be in Del Mar for the Breeders' Cup, but he also knows what he is up against. He has had three previous Breeders' Cup starters, the most recent giving him his best finish: Jamyson n' Ginger, who finished fifth in the 2015 Juvenile Fillies.

"We're always intimidated by everybody in the race," he said. "This is the World Series for us, and everybody's got a chance as long as we come out of the gate."