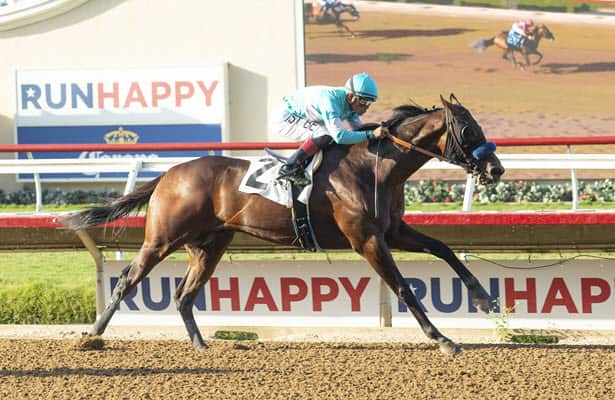 First-out winner Rockefeller is among a trio of colts for trainer Bob Baffert entered in Saturday's Grade 1, $300,000 American Pharoah Stakes at Santa Anita.

Additionally, the American Pharoah is an early stop on the road to the 2022 Kentucky Derby with 10 qualifying points going to the winner. However, Rockefeller and Baffert's other two entrants, Corniche and Flying Drummer, are all ineligible to earn Derby points. Baffert was suspended from competing in the next two Kentucky Derby's by Churchill Downs following Medina Spirit's failed drug test at this year's run for the roses. Additionally, Churchill Downs would later announce any qualifying points earned by a trainer who is suspended from the Kentucky Derby would be "vacated."

A $750,000 Keeneland September yearling, Rockefeller was a most impressive first-out winner going six furlongs at Del Mar on Aug. 28, winning by 2 1/4 lengths under Abel Cedillo, who rides him back on Friday.  A bay colt by Medaglia d’Oro out of the Speightstown mare Dance to Bristol, Rockefeller is owned by SF Racing, LLC, Starlight Racing, Madaket Stables, LLC, et al.

A winner of a record five previous runnings, Baffert would appear to be well positioned to notch his sixth American Pharoah win.

Pappacap, a winner of the Grade 2 Best Pal Stakes in his second start, and Finneus, who finished fourth and second respectively in the Grade 1 Del Mar Futurity at seven furlongs Sept. 6, both merit strong consideration.

California-bred Joker Boy, the likely speed in the race, comes off a smashing 3 1/2 length score in the I’m Smokin Stakes for California-breds going six furlongs and will have theft on his mind with Edwin Maldonado up.