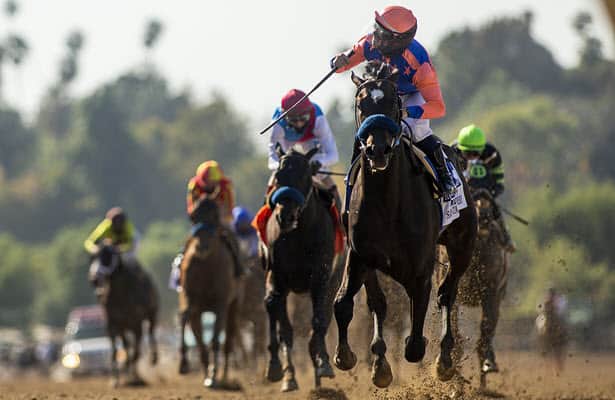 Umberto Rispoli was supposed to get his first U.S. Grade 1 win on turf, wasn’t he? Being from Italy and with so many races in Europe and having landed in the Southern California jockey colony barely 15 months ago, that is how it was supposed to go.

“Everybody classified me as a turf rider,” he said. “I’d say my first Grade 1 win in America was going to be on the dirt, and that’s what happened.”

After 22 misses at the top level, including a couple by just a neck, Rispoli finally broke through Saturday. And wouldn’t you know it? He did it on a turf horse in a dirt race.

Making his first start on the main track after two wins on the grass, Rock Your World (5-1) responded to Rispoli’s command right out of the gate. He got to the lead and stayed there, winning the $750,000 Santa Anita Derby (G1) on a sunny, 76-degree day in front of that rarest of commodities lately – spectators.

“It’s the best feeling I could have,” Rispoli said. “I was waiting so long for this moment. I couldn’t be more happy.”

A spot in the Kentucky Derby comes with the victory. Although he was a beaten favorite who could not threaten Rock Your World in the homestretch, Medina Spirit (4-5) earned enough points finishing second for trainer Bob Baffert, getting him to Churchill Downs, too. Third-place finisher Dream Shake (9-2) and fourth-place Defunded (6-1) look like they will miss the Louisville party.

While Rispoli was gushing, winning trainer John Sadler looked more like someone who has been down this road before, although this will be his first Kentucky Derby trip in seven years. His smile could have been that of the sly fox sneaking one over on conventional wisdom by bringing a turf wild card into the biggest prep on the West Coast.

“Everybody’s got a different plan,” Sadler said. “This was my plan this year, and it worked. So I look smart for about an hour. See me tomorrow.”

In his turf wins – a maiden sprint and a two-turn stakes – Rock Your World rated the pace early before applying a decisive turn of foot. The terms of engagement changed Friday, though, when news broke that Roman Centurian would be scratched from post 1 on Saturday. Although that stall was left vacant, it still meant Rock Your World in gate 3 was second closest to the rail.

“We didn’t have a set strategy,” Sadler said. “When they scratched the ‘1,’ all of a sudden now we’re the ‘2.’ I actually got (Rispoli) this morning at 8 o’clock in the paddock. I said, ‘Go big or go home. You have to get out there.’ I didn’t see any chance for him if the field came over on top of him. It worked out, and we’re excited.”

Rispoli got Rock Your World to the lead not long after the field passed the finish line for the first time in the 1 1/8-mile race. With Rispoli scrubbing the whole way to the mile pole, Rock Your World got the first quarter-mile done in 22.42 seconds. From there it got a little more relaxed.

Before he eventually finished sixth, Parnelli (45-1) pressed Rock Your World onto the backstretch but never to the point of hurrying Rispoli. The first half-mile was done in 46.11 and the first three-quarters in 1:10.64. By that point in mid-turn the lead was 1 1/2 lengths, and John Velazquez was lurking with Medina Spirit.

“My horse kept coming,” Velazquez said. “He did have some left in the tank, and he kept coming. But the other horse got away pretty well and opened up again. It was too hard to catch up.”

Bought at auction as a yearling for $650,000, Rock Your World is owned by brothers Kosta and Pete Hronis (think Eclipse Award winner Accelerate) and Michael Talla. The Hronises and Talla never before have had a Kentucky Derby horse.

Rock Your World was bred in Kentucky by Hall of Fame trainer Ron McAnally and is by Candy Ride out of the Empire Maker mare Charm the Maker. The closest McAnally, 88, came to a Derby victory was a pair of fourth-place finishes in 1980 (Super Moment) and 1982 (Water Bank).

Amid the hubbub over Medina Spirit’s stablemate Life Is Good before he got hurt, who knew that a horse that cut his teeth on the turf would use Southern California’s biggest prep race to land a place in the Kentucky Derby?

“We have been laying in the weeds,” Sadler said. “I thought it would be good to start this horse off on the turf and develop. The plan was to run him a couple of times on the turf, and now it was time to get the points. We’ve got to get the points to think about going to Kentucky.”

Now they have the points. And the invitation to America’s biggest race. It will also be the biggest race ever for Rispoli.

As he shouted walking through the tunnel from the track toward the jockeys’ room, “Let’s go.”