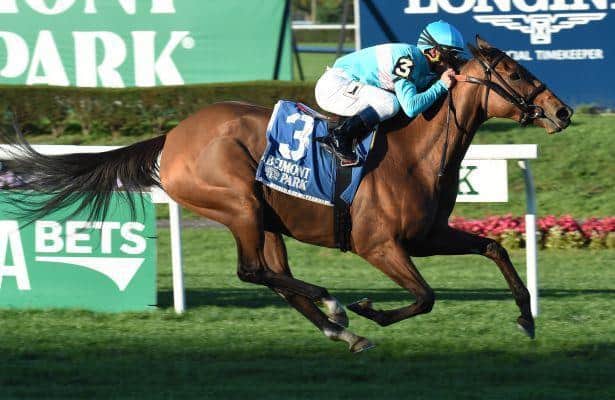 Roca Rojo rallied from the outside in midstretch to post a 3 1/4-length victory in Sunday's Grade 3, $200,000 Athenia for fillies and mares 3-years-old and up on the inner turf at Belmont Park.

The Irish-bred 4-year-old stayed well off the pace set by All in Fun, who set fractions of 25.12 seconds for a quarter-mile and 49.34 for a half.

Jockey Javier Castellano, who racked up three wins in celebration of his 39th birthday, coaxed Roca Rojo from sixth at the half-mile mark and gained ground until moving seven-wide in the upper stretch and took the lead in the final furlong to improve to 3-for-3 in her career at Belmont.

"She loved the soft turf and was able to settle and finish really strong today," said Brown of Roca Rojo, who completed the career-long 1 1/16 miles in 1:43.20. "We really like the way she's been developing. Javier really gave her a great trip."

"It was a perfect trip," Castellano said. "European horses tend to come from behind, so I covered her up and tried to save all the ground. When I took her up beside horses, she took off. It was impressive the way she did it today. Everything worked out perfect. We were able to sit off the pace and the ground was a little soft, and she liked that."

Castellano improved his meet-leading win total to 45 and had seven wins in the last three days.

"To win three races today on my birthday, I said, 'Oh wow, I'm blessed.' It's been a great day, everything's going in the right direction," Castellano said. "It's important to have people behind you to support you and give you the best shot. I'm very blessed and thankful that I get the opportunity to ride the best horses in the country and compete with the best riders in the country. I'm very lucky to be in the right place at the right time."

Strike Charmer, the only horse to defeat Brown's Lady Eli in her career, came in fourth for trainer Mark Hennig.

My Sweet Girl, Okana, Sea Coast, Sparkle Factor, Means Well and All in Fun completed the order of finish.

In Race 7, 27-1 longshot Dragon Bay stayed close the pace and held on for a half-length victory in the $100,000 English Channel for 3-year-olds on the Widener turf course.

Dragon Bay broke alertly from post 8 with Junior Alvarado aboard and stalked Abiding Star and Hockey School as the pair led the field of 12 through fractions of 23.34 seconds for a quarter-mile with the half going in 48.20.

At the quarter-pole, Alvarado guided Dragon Bay to the three-path while Catapult briefly made the lead with Hammers Vision in close pursuit. At the sixteenth-pole, Dragon Bay overtook Catapult and held off a late-charging run from Strike Midnight to earn the victory to complete the one-mile distance in 1:37.67.

"Turning for home, I knew I had plenty of horse left, so I just tried to keep him away from the rail and he stayed forward this time," Alvarado said. "I'm guessing he put it all together this time. I just tried not to fight with him, nurse him along and not bother him too much. I wanted to stay a little wide and have some room to myself, but today he was very kind to me and gave me a nice run at the end."

Returning $55.50 for a $2 win wager, the gelded son of Parading picked up career stakes victory from 12 starts for trainer and co-owner Stuart Simon and fellow owners Brent McLellan and Russell McLellan, boosting his career earnings to $189,261.