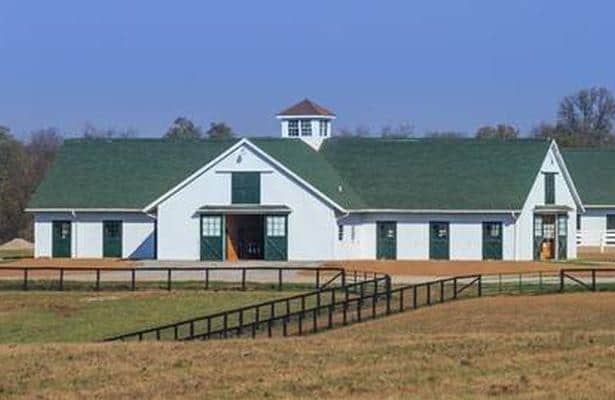 New Vocations Racehorse Adoption Program announced today that the second barn at their new Kentucky facility has been generously sponsored by Robsham Stables and Mike Repole. This barn, located on the historic Mereworth Farm, will be named the Robsham-Repole Barn. The sponsorship is part of the New Vocations Capital Campaign that was launched in 2015 to build the country’s premier racehorse adoption facility in the heart of the Bluegrass.

“I watched many times Mrs. Robsham and Mike Repole rooting for each other at the races, even when they were in the same race.  The partnership is extremely meaningful to them and to all of us at New Vocations.  The late Paul Robsham was instrumental in helping New Vocations obtain our 501(c)3 status and Mrs. Robsham has continued to support our aftercare efforts each year. Mike Repole has also been an avid supporter of our program and was instrumental in helping us launch the Capital Campaign. Seeing both of their names on the barn sign will be a true honor,” said Anna Ford, New Vocations Program Director.

“New Vocations’ vision, strategy and commitment to continue to expand their aftercare efforts is something that is greatly needed in the racing industry and something I’m excited to support.  Their new facility at Mereworth Farm will not only help hundreds of retired racehorses each year, it will also showcase all of the different future careers these amazing athletes have after they are retired from the race track.  It’s more important than ever, that all owners and breeders financially participate in the future well-being of retired race horses,” said Mike Repole.

“When the Robshams were first introduced to New Vocations in the ‘90s, it brought them much comfort to know there was a safe place where their retired racehorses could go to find second careers. Paul was passionate about the program and adamant that it could become the largest in the country. He would be very proud of how New Vocations has grown and he would be honored to be a part of the new facility at Mereworth Farm,” said Patricia Davis, Robsham Family Trustee.

The New Vocations Capital Campaign has raised over $1.7 million of its $2 million goal.  The project has been made possible through a longstanding relationship with the Susan S. Donaldson Foundation and an impressive list of Thoroughbred and equine industry supporters. Once complete, the new facility, which encompasses an additional barn provided by Mereworth Farm, will house over 60 retired racehorses in various stages of rehabilitation and retraining to prepare for a new career and loving home. Over 130 horses have come into the new facility since the first barn opened on April 15 of 2016. Once the project is completed, New Vocations will double the number of horses it was previously serving at its Kentucky location.

To follow the campaign’s progress and to learn more about the naming and giving opportunities, visit newvocations.org/capital-campaign.