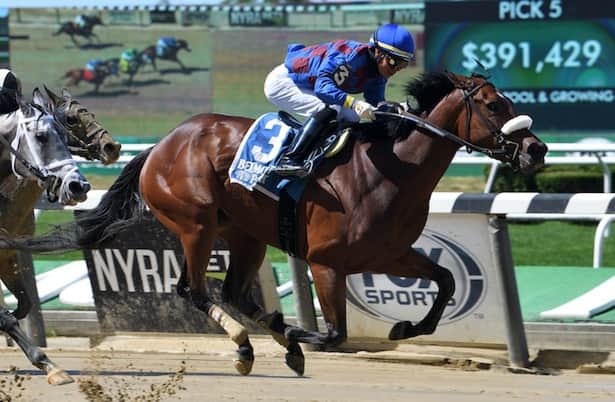 Trained by Bruce Brown, the 4-year-old Elusive Quality bay has won races at all three NYRA tracks, including a state-bred maiden score at the Spa last summer under returning pilot Jose Ortiz.

Bred in the Empire State by Hibiscus Stables, Robin Sparkles won 4-of-6 starts in a productive sophomore campaign, including open allowance wins in turf sprints at Belmont Park in September and Aqueduct Racetrack in November.

Robin Sparkles finished second in the open License Fee in April over good Belmont turf to launch her 4-year-old campaign ahead of a front-running score in the off-the-turf Mount Vernon against fellow state-breds on May 31 at the Elmont oval.

“That last race was like a stake and it was open company. I think she proved she can run with those,” Brown said. “Ideally, I’d like to see it on the firmer side, but I think she can handle pretty much anything.”

Ortiz, who has guided Robin Sparkles to five of her six career wins, was aboard for a half-mile breeze in 48.31 seconds July 16 on the Oklahoma dirt training track.

"He really likes her and was getting on her before she even ran," Brown said. "He has a really good rapport with her and can tell us how she's doing compared to before. It's always good when you can keep a consistent rider on them."

Caravel, bred in Pennsylvania by her trainer Elizabeth Merryman, will make her Saratoga debut.

Bobby Flay purchased a majority interest in the 4-year-old Mizzen Mast grey following her last-out 4 1/4-length score in the Goldwood, a five-furlong turf sprint at Monmouth Park on June 25.

A stylish last-to-first maiden winner after a slow start on debut in June 2020 in a state-bred five-furlong turf sprint at Penn National, Caravel blitzed to a front-running state-bred allowance score at second asking at the same course and distance in a rapid final time of 54.66.

"I was pretty impressed with her second start," Merryman said. "I told the jock not to rush her, but he did. She ran so fast that day, she could barely corner and was just off an 18-year-old track record. I knew then she was the real deal."

After a score in six-furlong Lady Erie in October on the Presque Isle Downs synthetic, Caravel stretched out in distance for the one-mile Hilltop contested over yielding turf at Pimlico Race Course.

"The one time I sent her long, the turf was so soft and she didn't settle very well. My sister's horse was adamant about going to the lead and she still held on for third," Merryman said. "That turf was so bottomless and it was first time long and she was really rank going down the backside. Usually, when a horse gets a trip like that they completely pack it in down the lane and she didn’t at all. She's always acted like she could go farther, but I've kept her sprinting because she's very good at it."

Caravel enters the Caress on a two-race win streak in open five-furlong turf sprints, including a nose score in The Very One on May 14 at Pimlico and a sharp score in the Goldwood that garnered a career-best 99 Beyer.

Merryman said the lofty speed figure last out may be a result of stiffer competition, stepping into open stakes company.

"She's a lot more mature. She's stouter and stronger, but I don't know if she's improved that much or if she's just been tested more so her numbers have gone up," Merryman said.

A winner of 6-of-8 career starts, Caravel is out of the Congrats mare Zeezee Zoomzoom, who graduated in August 2015 in a one-mile turf test on the Saratoga turf.

Caravel will exit the inside post under Irad Ortiz Jr.

Trained by Mike Maker, the consistent mare, who finished fourth in the optional-claiming event won by Robin Sparkles last out, finished second to Cariba in last year's ungraded Caress in her lone start at the Spa.

Jakarta exited the Caress to win a starter allowance in September at Kentucky Downs ahead of a close third in the Grade 3 Buffalo Trace Franklin County in October at Keeneland. The Pennsylvania-bred bay continued that good run of form by capturing the Claiming Crown Distaff Dash in December at Gulfstream to close out her campaign.

Winless in five starts this season, Maker said he is hoping a return to the Saratoga turf will give the talented bay a boost.

“She’s run well here before and ran a great race here last year, so we’re giving it another shot. I would think she would be up close early," Maker said.

Luis Saez, aboard for the Gulfstream win, returns to the saddle from the outermost post 6.

The Caress is slated as Race 10 on Saturday’s 11-race card.

*Rating is based on HRN fan votes, which rank the Top Active Horses in training.
Robin Sparkles Caress Caress (2021)