River Boyne a determined winner of the Mathis Brothers Mile 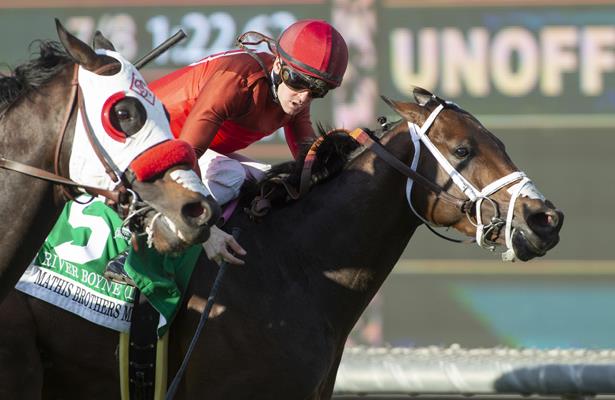 River Boyne hesitated a bit entering the gate Wednesday at Santa Anita Park. It was as if he knew he’d already been there and done that.

Then the 3-year-old from trainer Jeff Mullins’ barn delivered again in the Grade 2, $200,000 Mathis Brothers Mile, moving his record over the Santa Anita Lawn to a perfect 6-for-6.

Under jockey Flavien Prat, who scored a riding double having also piloted Spiced Perfection in the La Brea (G1) one race earlier, River Boyne made a determined outside rally through the far turn and just managed to hold off rivals on either side at the wire.

"He made a nice move turning for home," Prat said. "He got a little tired at the end, but we hanged in there."

Bred in Ireland, River Boyne beat Desert Stone by a head while Combatant — a former Kentucky Derby contender now running on turf — put forth his best effort as of late to be a close third, only a half length behind.

Off at 2-5, the colt rebounded from a runner-up finish last out in Del Mar’s Hollywood Derby (G1). While dominant at Santa Anita, he has one victory elsewhere, taking Del Mar’s La Jolla Handicap (G3) back in August.

The Mathis Brothers Mile set up well for the winner, who had only three runners in a strung out field of 10 beat up the back stretch. Longshot Hardboot went the opening fractions in 22.68 and 46.14. Sending they may be going too fast, John Velazquez took a strong hold of Gidu while traveling in the second spot.

As the early leaders faded, Prat had River Boyne kicking on the outside, with a cleaner trip the winning one given Desert Stone fought through traffic to narrowly miss at the wire.

River Boyne began his career with three races in Europe before making his U.S. debut in November 2017. Overall, he’s 7-3-1 in 14 starts.