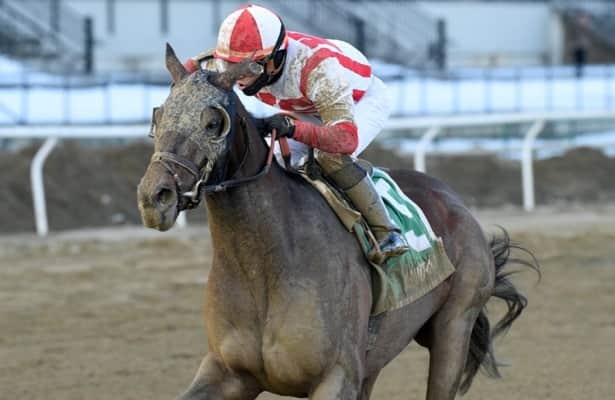 Chad Brown – four-time Eclipse Award winner for Outstanding Trainer, but not yet a Kentucky Derby winning-conditioner – seems to have a legitimate Derby prospect in Risk Taking.

Risk Taking earned 10 points on the Road to the 2021 Kentucky Derby with his Withers score. Second-through-fourth-place finishers Overtook, Capo Kane and Royal Number earned four, two and one point, respectively.

Campaigned by one of Brown’s top owners in Klaravich Stables, Risk Taking started his career with off-the-board efforts Oct. 10 at Belmont Park going six furlongs and Nov. 14 at Aqueduct running 1 1/16 miles on the turf. Brown let him go two turns on the dirt Dec. 13 at Aqueduct, and the colt responded with a strong closing move to score by 2¼ lengths.

"It really made a difference," Brown said of stretching out. "He’s a horse that always showed a lot in his morning drills as a 2-year-old and I was quite surprised that he didn’t run better in his first two starts. In his debut, although the running line looks ugly, he did gallop out big. It was my error to rush him onto the turf (second out), I was looking for a distance race that didn’t have much kick back, but it just didn’t work out.

"So, we blinkered him up and he got his confidence under him and he really broke through in that maiden victory.”

With that nine-furlong, main-track victory under Risk Taking’s belt, Brown had him go the same distance over the same course in the Withers, the second of Aqueduct’s four-points paying Kentucky Derby preps.

Eagle Orb, who ran second to Capo Kane in the Jerome, was the first to challenge the pace setter, moving up along his outside along the far turn. Capo Kane turned that rival away while Risk Taking powered up with a three-wide bid under Cancel.

Risk Taking reeled in Capo Kane under a right-hand crop. He fanned out to take the lead when Capo Kane – similar to how he finished the Jerome – wandered toward the center of the track.

Once by Capo Kane, Risk Taking drew off to win by 3 3/4 lengths over second-place Overtook, who secured runner-up honors in the final yards.

“With the way he ran today, he won’t have any problem going a mile and a quarter," Cancel said of the Kentucky Derby's distance. "He came back good and he wasn’t blowing too much. Distance won’t be a problem for him.”

“I would not cut the horse back in distance from here to the Derby under any circumstances," Brown said. "The most logical spot would be to train him up to the Wood, but I won’t make that decision until we observe the horse and I have a chance to over it with the owner, Seth Klarman.”