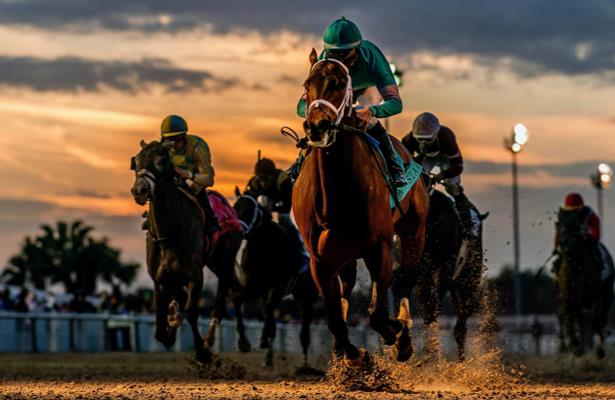 When Mr. Monomoy ran a troubled fourth on debut last October at Keeneland, co-owner Michael Dubb left the race anything but discouraged.

“I said to myself,” Dubb remembered Saturday, “‘I think I can win a Kentucky Derby with that horse.’”

From losing at six furlongs in the fall, the son of Palace Malice has come a long way, staying on for 1 1/8 miles in the first division of Fair Grounds’ Risen Star Stakes (G2). The 50 qualifying points earned are in all likelihood enough to guarantee a 2020 Kentucky Derby starting spot.

“It’s a big update for him and the family,” said Brad Cox, who also trains Mr. Monomoy’s older sister, the champion Monomoy Girl.

Mr. Monomoy went on from that debut to break his maiden with a running style that has served him better, going to the front and trying to hold on. From a Churchill Downs victory, he then went on to be a close second in a Fair Grounds allowance around two turns.

Sloppy conditions in his first race facing winners, plus a stop-and-start trip in the Lecomte Stakes (G3), led to Mr. Monomoy leaving the gate for the Risen Star at 7.5-1.

“We felt this horse would go long,” Dubb said. “We never gave up hope on this horse. It was kind of a difficult third last time, but not badly beaten, and had the feeling the horse would go forward.”

“I think it has a lot to do with the pace and how comfortable he could be,” Cox added.

After traveling through opening quarter mile fractions in 24.22 and 48.57 seconds, Mr. Monomoy came under pressure to his outside by Blackberry Wine through the far turn, only to repel that rival and go on to win by 2 1/2 lengths. Mr. Monomoy finished up in 1:50.43, faster than the second division of the Risen Star run minutes later and won by Modernist.

And now his connections aren’t just thinking about getting to the Derby. That part appears done. What about winning it?

“I think he can overcome adversity,” Dubb said. “I don’t think he has to have the lead. I don’t think he wants to necessarily be way back, but I think the horse has class and versatility. Forwardly placed is where you want to be when it’s a 20-horse field.”

That’s proven especially true in the Kentucky Derby’s points era, where pace-setting or pressing types of horses who carry their speed are often wearing roses on the first Saturday in May.

Sol Kumin’s Madaket Stables and Doheny Racing also campaign Mr. Monomoy, who Kumin discovered up for auction as a 2-year-old in France. He cost a relative bargain $202,230 given Monomoy Girl was an established champion and their dam, the Henny Hughes mare Drumette, commanded $1.85 million when going through the sales ring in November of 2018.

Cox said he’s looking for one more start before the Kentucky Derby, with the March 21 Louisiana Derby (G2) among the options.

“When I opened the condition book to begin the season, I saw Risen Star, mile and an eighth, Louisiana Derby, mile and three-sixteenths. I thought it would kill it,” Cox said.

The Louisiana Derby still falls early on the calendar for a major prep, being six weeks out from the Kentucky Derby. Cox said he likes the sound of that, but will confer with partners before deciding a spot.

“The bottom line is,” he said, “you’ve got to have a horse that’s doing really well and get a good trip in the Derby.”