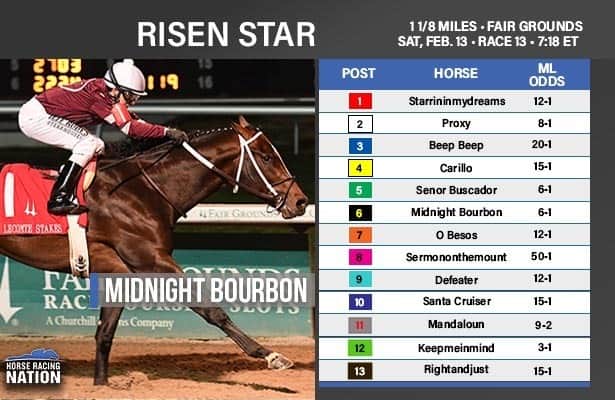 The Grade 2. $400,000  Risen Star on Saturday has attracted a full field of 3-year-olds who will have to race nine furlongs in the first Kentucky Derby prep race of the year to offer the increased points level (50-20-10-5).

The top four finishers from the Lecomte (G3), which was the first Derby prep of the year run at Fair Grounds, are in the field. The winner of the Springboard Mile will now try and pick up Derby points while racing without Lasix this time.

Here is a full field analysis for the Risen Star, which is carded as the final race out of 13, with post time scheduled for 7:18 pm ET. The morning lines odds are from the Fair Grounds odds maker.

1) Starrininmydreams (12-1 – Super Saver – Dallas Stewart / Brian Hernandez Jr. – 2: 2-0-0 - $93,064) The winner of his first two starts at Churchill Downs as a 2-year-old returns from a two-turn allowance victory for trainer Dallas Stewart, who is also listed as an owner and breeder along with Win Star Farms. In his debut win, he beat Hidden Stash who came back to run third in the Sam F. Davis (G3). Live longshot.

2) Proxy (10-1 – Tapit – Michael Stidham / John Velazquez – 4: 2-2-0 - $107,700) – This Godolphin home-bred has run big since getting settled at the Fair Grounds. He broke his maiden, won an allowance, and then ran second in the Lecomte (G3). He earned four Derby points in that prep race with a less than ideal trip where got bumped at the break and then had some trouble in the stretch but still won the battle for second against the favorite. He gets a great rider change to Hall of Famer Johnny V. and he’s got tactical speed. Win contender.

4) Carillo (15-1 – Union Rags – Tom Amoss / James Graham – 1: 1-0-0 - $44,000) Carillo was one of the last horses to run in the name of the late owner Paul Pompa. He was a debut winner at Aqueduct in January going a mile and went right from there to the Pompa dispersal sale where he fetched a big price of $875,000. The new owners opted to move Carillo from Chad Brown to Tom Amoss. He’ll probably attract attention from bettors because of this story. He has talent but faces a strong and large field here. Live longshot.

5) Senor Buscador (6-1 – Mineshaft – Todd Fincher / Luis Quinonez – 2: 2-0-0 - $137,247) – He is one of only two stakes winners in the field with his coming in the Springboard Mile at Remington Park following his debut maiden score. Senor Buscador was happy to sit in last place in that stake and when asked to run entering the turn for home, he moved very quickly and had the lead at the top of the stretch. He drew off to win by almost six lengths while earning a 93 Beyer Speed Figure, which tops this field. He won that race with Lasix and now goes without the medication to be eligible for the Derby qualifying points this time. There appears to be enough speed in this field to set-up up his late closing move.  Top Choice.

6) Midnight Bourbon (6-1 – Tiznow – Steve Asmussen / Joe Talamo – 5: 2-1-2 - $221,420) He is the other stakes winner in this field, with his coming last time out in the Lecomte with a front running effort. It was his first start since finishing third in the Champagne (G1) at Belmont Park. He looked tired in the final 100 yards as his lead shrunk to one length at the wire, but he was coming back from an October layoff. Regardless, he will have to go extra distance in this 1 1/8 mile test and will likely face pace pressure. Win contender.

7) O Besos (12-1 – Orb – Greg Foley / Marcelino Pedroza – 3: 2-0-0 - $56,624) Since moving to Fair Grounds, he won his last two starts with a maiden victory and then an allowance win in a sprint. He was slow breaking from the gate in all three starts and will get a rider change since Brian Hernandez opted to ride for Dallas Stewart. Speed figures have climbed but this looks a tough spot. Toss.

10) Santa Cruiser (15-1 – Dialed In – Kent Desormeaux / Adam Beschizza – 4: 1-1-1 - $81,792) – It took three tries for him to break his maiden at Churchill going a mile in November. He came back to run fourth in the Lecomte after getting crushed at the break and falling 15 lengths behind. He is probably better than that race shows. Use underneath at a price.

11) Mandaloun (9-2 – Into Mischief – Brad Cox / Florent Geroux – 3: 2-0-1 - $111,252) – This Juddmonte Farms home-bred was a heavy favorite in all three starts including the Lecomte where he disappointed when running third. It was his first start going two turns and racing at Fair Grounds while sitting in good position early on he lacked a closing move down the stretch and also lost the battle for second. He gets blinkers on, which may help, but he will have to go farther against a tougher field. Mandaloun is a threat to win but he’s not for me. Win contender.

13) Rightandjust (15-1 – Awesome Again – Shane Wilson / Mitchell Murrill – 3: 2-0-0 - $50,820) – Like a couple of others in this field, he won his two most recent starts at Fair Grounds. He won a $50,000 maiden claimer and then an allowance and both races went two-turns. Interestingly, he was claimed out of that maiden win from Louie Roussel III who was the trainer of Risen Star. Toss.