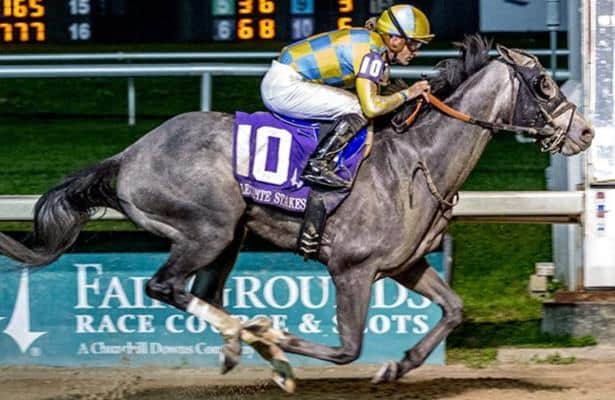 Photo: Hodges Photography
Saturday is "Louisiana Derby Preview Day" at Fair Grounds featuring split divisions of the Risen Star Stakes (G2), the first points races on the 2020 Kentucky Derby trail paying out to top finishers on a 50-20-10-5 scale.
The first division of the Risen Star boasts a field of 11 runners, with 7-2 morning line favorite Enforceable exiting a local win in the Lecomte (G3) from the No. 8 post. Post time for this first flight is 6:38 p.m. ET as Race 12 on the card.

According to the TimeFormUS Pace Projector, expects a pressured early lead with each of Ready to Roll (No. 3), Shashashakemeup (No. 6) and Blackberry Wine (No. 7) wanting part of the front. Meanwhile, as with in the Lecomte, Enforceable will have work to do from off the pace.

The second division of the Risen Star consists of 12 contenders, with 2019 Breeders' Cup Juvenile runner-up Anneau d'Or installed as the 9-5 morning line favorite. Post time for Race 13 at Fair Grounds is 7:12 p.m. ET.

*Rating is based on HRN fan votes, which rank the Top Active Horses in training.
While TimeformUS' Pace Projected also predicts quick fractions for this flight, the lead isn't expected to be as hotly contested, with the Florida shipper NY Traffic potentially alone up front. Anneau d'Or (No. 8), Liam's Lucky Charm (No. 5) and Lynn's Map (No. 9) are expected to fall in line behind the early pace setter.
The Risen Star Stakes on TVTVG will offer full-card, on-site coverage Saturday at Fair Grounds. Sign up for a free TVG account to live stream races from every track, every day.

Via Fair Grounds publicity...
The first division of the Risen Star will feature a field of 11, headlined by John C. Oxley’s Enforceable, who was last seen closing from far back to win the locally run Lecomte on January 18 for trainer Mark Casse.

“We’re very happy with the split of the race,” Casse’s assistant on the grounds, David Carroll, said after the draw. “It gives more horses and owners an opportunity to run and earn points for the Derby.”

Following a third in the Breeders’ Futurity (G1) at Keeneland in October, the son of Tapit followed up with a somewhat troubled fourth over a sloppy track in the Kentucky Jockey Club (G2) at Churchill Downs in November. Sent to post as the 6-1 fifth choice in Lecomte, the first of three Kentucky Derby preps held in New Orleans, Enforceable sat behind an honest pace before closing late to win by 1 ½ lengths.

With 13 Kentucky Derby points already in the bank, Enforceable will break from post eight with jockey Julien Leparoux back aboard.

“We couldn’t be any happier with him,” Carroll said. “He’s a horse who trains himself. He loves going out in the mornings and doing his work. He does it very professionally every morning and well within himself. It was a nice and easy (half-mile) breeze Saturday morning (49 3/5) and a nice gallop out. He has so much foundation that he doesn’t need a whole lot of training at this point.”

“There’s not shortcut to the Derby. It’s a long road to get there,” Carroll continued. “You have to earn your way in. We just want to keep Enforceable sound. We’re looking forward to the race and seeing where we stand.”

After finishing 1-2 in a first-level allowance race which run in a faster time than the Lecomte on the “Road to Derby Kick Off” undercard, Calumet Farm’s Blackberry Wine and Tom R. Durant’s Digital also landed in the first division of the Risen Star.

The second division of the Risen Star will mark the sophomore debut of Peter Redekop's California invader, Anneau d’Or.

With runner-up performances in both the Breeders’ Cup Juvenile and Los Alamitos Futurity (G2) as a 2-year-old, the son of Medaglia d’Oro already has already earned 12 Kentucky Derby points. A win or a second in the Risen Star would put him in a superior position moving forward.

“That was probably the No. 1 factor in our decision to come to Fair Grounds,” trainer Blaine Wright explained. “The spacing between the Risen Star and the Santa Anita Derby (G1 on April 4) is really nice. It allows us to travel across the country, come back and still get six weeks in between races. Those are the two races we’ve targeted, and hopefully the horse and I keep doing what it takes to get us where we want to go.”

In a couple of firsts for Anneau d’Oro, Joel Rosario will ride and the colt will be equipped with blinkers from post eight of 12.

“In my opinion, we were a head and a neck away from winning an Eclipse Award,” Wright said. “We have to find a way to get past horses. Joel Rosario flew up (to Golden Gate Fields in northern California) and worked him last week and got to know him. Hopefully the changes will work out to our advantage.”

After edging Mr. Monomoy in a first-level allowance race over a sloppy Fair Grounds track in his two-turn debut in December, HRH Prince Sultan Bin Mishal Al Saud’s Lynn’s Map was rerouted to Oaklawn Park for the Smarty Jones Stakes after drawing post 14 in the Lecomte. He will remain at his home base for Saturday’s second division of the Risen Star for trainer Mark Casse.

“We’re throwing out that race at Oaklawn,” Carroll said of the colt’s fifth place finish over a muddy track. “The track seemed to be very sticky that day and to me he never looked settled and comfortable. When Miguel (Mena, jockey) asked him to pick it up, Lynn’s Map sort of lost his action and never looked happy in that race.”

“He came out of the Southwest really well and has done everything we’ve asked of him since,” Carroll said. “Ideally we’d like to have another week or so with him between races but we don’t want to ship him out again. We think as long as he’s doing well, we will take a chance and let him show us what he can do.”

With Corey Lanerie aboard, Lynn’s Map is programmed in post position number nine.

Others certain to attract attention in the second division of the Risen Star are recent Pasco at Tampa Bay dominator Liam’s Lucky Charm from post five with Edgar Zayas up for Stonehedge LLC and trainer Ralph Nicks and the undefeated Mailman Money from post 11 with Gabriel Saez in saddle for Allied Racing Stable LLC and trainer Bret Calhoun.

The 2019 edition of the Risen Star (G2) proved to be a very key race. Five of the 14 participants went on to become Grade I winners, and two others won multiple Grade III events and were Grade 1-placed.
Playing the horses can be a rewarding but tough game. Exacta, trifectas, superfectas, Pick 4s, Pick 5s -- there are so many wagers to play, it can get overly confusing.