Riley Mott has a 'good blueprint' as Oaklawn meet begins 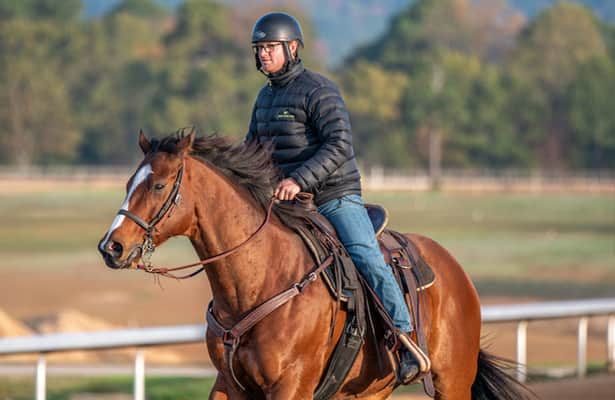 Forest green, with a hint of white, dominates the south side of the Sunny’s Halo barn at Oaklawn, from traffic cones that line bridle paths to feed tubs.

Based on the color scheme, one might assume they’ve stumbled into Hall of Fame trainer Bill Mott’s barn in New York, Florida or Kentucky.

There is one subtle difference.

The white outline of a diamond, framed by that dark green background – synonymous with Mott’s career – has been reimagined and replaced by the white outline of two diamonds (one inside the other) on saddle towels, helmet covers, bandage holders, etc. Two diamonds. As in father and son.

Sunny’s Halo is home in early December to about 20 horses for Mott’s meticulous son, trainer Riley Mott, who went out on his own Nov. 1 after assisting his father for eight years.

Riley Mott, 30, said the logo tweak to his equipment – an additional diamond – was his idea and represents his past and future.

“There’s some symbolism there, I guess, not to make a pun or anything,” Mott said. “It’s been meaningful, almost like a family crest. The idea behind it was almost motivation to uphold the standard that my dad set.”

The standard, of course, is off the charts.

Mott’s 5,267 career victories, including 35 when he topped the 1986 Oaklawn standings and another when he returned nine years later with the mighty Cigar for the $750,000 Oaklawn Handicap (G1), ranked eighth in North American history through Tuesday, according to Equibase, racing’s official data gathering organization. His $322,507,574 in purse earnings ranked fourth.

Mott’s familiar stable colors trace to the mid-1980s, when he began working for acclaimed owners Bert and Diana Firestone. Their silks – green with a white outline of a large diamond – were carried by such standouts as 1980 Kentucky Derby winner Genuine Risk and Honest Pleasure, another Eclipse Award winner (1975 champion 2-year-old male).

“His original colors were like brown and yellow,” Riley Mott said, referring to his father. “Those are a little different than what he has now. When he got the Firestone job, obviously, he went to the diamond. And when his contract was finished, they agreed to let him keep all the tack.”

Asked whether he’s tried to replicate his father in other areas, Riley Mott was emphatic: It’s the Bill Mott way.

“I’m not trying to reinvent the wheel,” Riley Mott said. “It’s what I know. I was raised in a Hall of Fame barn my entire life, and I’ve got what I think is a pretty good blueprint for how we do things. Like I said, I’m not going to deviate from what I know too much. I’m basically him, with a different symbol.”

Mott said he never had a timeline for going out on his own but began to get the itch two years ago. He said his father told him the right opportunity would come, but it wouldn’t necessarily be the first opportunity and to trust his gut.

“You can never stop learning in this game, but I thought I had a handful of years of experience under my belt and I was pretty confident in what I’ve learned to go do it on my own,” said Mott, whose namesake, Riley Tucker, won the $50,000 King Cotton Stakes in 2012 at Oaklawn. “A year ago last November, I sat down with my dad and had the conversation and said this is what I want to do. He gave me his blessing and support and I started planning for today about a year ago, so it’s been a long time.”

Bill Mott revealed plans for his son to begin his career in Hot Springs in 2022-23 during a trip last April to Oaklawn for its inaugural Hall of Fame Day, which honored members of the National Museum of Racing Hall of Fame.

Although Riley Mott graduated in 2014 from the University of Kentucky with a degree in economics, he said it was inevitable that he would make Thoroughbred racing a career.

“Just watching him grow up, he was destined to,” said Bill Mott, who was in Hot Springs late last month to spend Thanksgiving with his son, daughter-in-law Megan and their young daughter, Margot. “I mean, he always liked it. He was ambitious and loved the competition and likes horses. I think anybody that grows up, whether you’re in sports or whatever, you like that kind of atmosphere where you’re competing. If you like horses and you like competition, it’s a perfect combination.”

Riley Mott said the last year has allowed him to assemble a trusted support staff and secure a good base of older horses to run this winter in hopes of returning to Kentucky this spring and begin accepting 2-year-olds.

Mott, for example, hired recently retired jockey Ty Kennedy as an exercise rider. Kennedy, who won 347 races from 2015 to 2022, galloped for trainer Brad Cox last summer in Indiana and said he initially thought he would follow the two-time Eclipse Award-winning trainer to Oaklawn. Kennedy changed teams after one of his former agents, Scott Hare, told him that Mott also would be wintering at Oaklawn and sent him the trainer’s phone number. Kennedy said he was quickly struck by Mott’s patience and attention to detail.

“Really good people to work with and work for,” Kennedy said. “We’ve got an awesome crew here. I mean, I’ve been in some barns that it’s straight chaos, 24/7, and some barns that are a well-oiled machine. The crew that Riley has here is very good, very hands on and we take our time with the horses. We’ll spend 40, 45 minutes sometimes on a horse, just taking the time, taking it slow, doing it right. That’s what Riley wants to do, and I hope the results show come race day and I think that they will.”

“I never really thought about going anywhere else to start,” Mott said. “I think, obviously, the purse money is great, but one of the main things for me is the people are so friendly and welcoming. It’s just like a really kind of homey type of feel. They act like they want you here. I sort of wanted that starting out. The people have been super nice and helpful and the racing’s good and there’s good horses that run here and I thought maybe it would be a good place to pick up some good owners.”

Mott said his stable is a mix of 2-year-olds and older horses. Some were previously trained by his father, while recent sales purchases have boosted numbers. Mott said the hope is to continue diversifying – colts, fillies, long, short, all class levels – through claiming.

Fletcher also has horses with Bill Mott and enjoyed a resurgence since reuniting with him in 2019. Fletcher and Mott campaign, among others, millionaire multiple graded stakes winner Frank’s Rockette and Grade 3 winner Candy Man Rocket. Frank’s Rockette won the $150,000 American Beauty Stakes for older female sprinters in 2021 at Oaklawn.

Fletcher said he had no qualms about sending horses to Riley Mott.

“My wife says he’s the most polite young man she’s ever met,” Fletcher said. “He takes his hat off when he’s introduced to a lady. He comes from really good stock is what we like to say. We love his mother and dad. He’s exactly like his dad – very deliberate, very quiet. Takes his time.”

Riley Mott has one career victory to date, that coming Nov. 10 at Churchill Downs when Unifying captured a maiden special weight sprint for 2-year-old fillies. It was his third career starter. Mott’s other two starts also came last month at Churchill Downs, with his small string there under the care of Kenny McCarthy, Bill Mott’s longtime Kentucky assistant. Unifying previously was trained by Bill Mott.

Riley Mott already was in Arkansas when his debut runner, American Tattoo, ran sixth Nov. 2, continuing a measured approach in the runup to saddling a horse for the first time in his name.

“I thought it was more important that I get here,” Mott said. “It was the same day we were setting up the barn and the horses were coming in, so I thought it was important for me to be here and oversee that. We’ve got a pretty good crew at Churchill. They can take care of running the horse.”

Mott said it was always his plan to start three horses at Churchill Downs before the focus shifted solely to Oaklawn. As a traveling assistant, Mott was at Oaklawn in 2017 to saddle future multiple Grade 1 winner Elate for his father in the $200,000 Honeybee Stakes (G3) and returned in 2020 to oversee several horses, including Tacitus for the $600,000 Oaklawn Handicap (G2). Earlier that year, Riley Mott also accompanied Tacitus to the Middle East for the $20 million Saudi Cup (G1).

Bill Mott, who came up under the likes of Hall of Fame trainer Jack Van Berg and his protege, Robert L. Irwin, was roughly 20 when he started his first horse and recorded his first career victory in 1973, according to Equibase, racing’s official data-gathering organization.

“What’s the right time?” Mott said. “I think (Riley) was ready. He knows enough. Look, it’s like anybody else starting out. If you get the right horses, you’re going to have a chance. He works hard, and he’s a good horseman. He has to learn to manage a business.”

Bill Mott also has five stalls in Sunny’s Halo, which will allow his son to care for horses he might ship in from south Florida’s Payson Park, the Hall of Fame trainer’s longtime winter base.

Father and son are scheduled to tangle for the first time in Saturday’s eighth race at Oaklawn, a maiden special weight route for 2-year-olds. Parkway, previously raced in Kentucky, is trained by Bill Mott. Deluca is scheduled to make his career debut for Riley Mott.

May the best diamond win.

“I don’t know,” Bill Mott said with a laugh. “I thought I was the big diamond.”