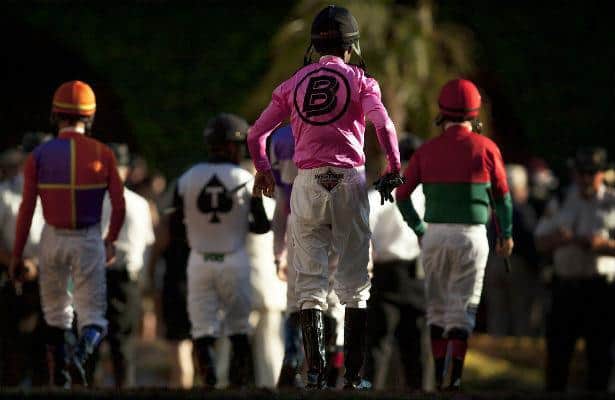 The Jockeys’ Guild, Permanently Disabled Jockeys Fund and National Thoroughbred Racing Association, in conjunction with racetracks across the United States, announced that riders competing on Saturday, July 31, (or another mutually agreed upon date that week at racetracks not racing that day) will wear PDJF arm bands to pay tribute to National Disability Independence Day and to raise awareness and funds for the PDJF.

Jockeys at more than 20 racetracks will participate in various activities to support the PDJF while also saluting National Disability Independence Day, which marks the 31st anniversary of the passage of the Americans with Disabilities Act (ADA). Passed by Congress in 1990 and signed into law by President George H.W. Bush, the ADA banned discrimination based on disability in all parts of public life while improving the quality of life immeasurably for millions of people with disabilities.

Most racetracks will host activities on Saturday, July 31, although some racetracks that do not race on that day will be participating on another date during the week. Fans should check with their local racetrack for exact dates and events. Throughout the day, fans and industry participants will be encouraged to contribute to the PDJF at PDJF.org. The PDJF is a 501(c)(3) public charity that provides financial assistance to approximately 60 former jockeys who have suffered catastrophic on-track injuries.

“The PDJF welcomes teaming up with the Jockeys’ Guild and NTRA to honor the passage of this very important piece of legislation that has changed the lives for all Americans living with a disability,” said Nancy LaSala, board president of the Permanently Disabled Jockeys Fund. “The lives of PDJF recipients are improved as a result and for this we are very grateful.”

“The NTRA is proud to join the Jockeys’ Guild and Permanently Disabled Jockeys Fund in paying tribute to landmark civil rights legislation known as the Americans with Disabilities Act, which ensures that individuals with disabilities have the same rights and opportunities as all Americans,” said Alex Waldrop, president and chief executive officer of the NTRA.

“We thank the many jockeys from around the country for supporting this effort to heighten awareness of the Americans with Disabilities Act and assist in raising funds for the PDJF,” said Terry Meyocks, president and chief executive officer of The Jockeys’ Guild and a member of the board of directors of the PDJF. “We also are immensely grateful to everyone who contributes financially to the PDJF.”