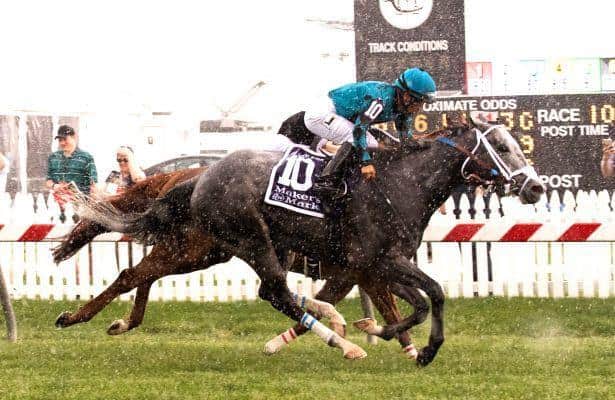 Photo: Maryland Jockey Club
The reign of Ben’s Cat ended in the rain, when Richard’s Boy ran down speedball Pay Any Price in the final sixteenth of a mile to win Friday’s 12th running of the $100,000 Jim McKay Turf Sprint at historic Pimlico Race Course.
Trained by California-based Peter Miller for Rockingham Ranch and ridden by Paco Lopez, Richard’s Boy ($7.80) ran five furlongs in 56.20 seconds through a driving rainstorm to edge pacesetter Pay Any Price by a neck.
Ben’s Cat, a 26-time stakes winner and earner of more than $2.6 million in lifetime purses, raced in tight quarters early near the back of the 14-horse field before switching outside in the stretch but was unable to make up ground and wound up eighth.
Bred, owned and trained by Hall of Fame horseman King Leatherbury, 11-year-old gelding Ben’s Cat had won the Jim McKay four straight times and five of the previous six years dating back to 2011. His overall career-high losing streak stretched to seven races in his second start this year.
Richard’s Boy was making his first start since finishing fifth in the Al Quoz Sprint (G1) March 25 at Meydan Racecourse in Dubai. The typically front-running son of Idiot Proof laid back off sizzling fractions of 21.93 seconds and 44.93 set by Pay Any Price, who set Gulfstream Park’s five-furlong turf course record winning the Silks Run Stakes two starts back.
Lopez and Richard’s Boy moved up to engage Pay Any Price after straightening for home and steadily gained on the leader until edging past. It was 1 ¼ lengths back to Amelia’s Wild Ride, who emerged from a tight pack for third, a nose a head of Take Cover.
JIM McKAY TURF SPRINT QUOTES
Winning trainer Peter Miller (Richard’s Boy): (By Phone) “He’s a barn favorite. I’m so happy for the horse and the team. They were the same people who went with him to Dubai. When I saw the rain start to come down, I thought it might affect other horses but would not affect him. He’s a bulldog. We’re thinking of using this race as a prep for Royal Ascot.”
Winning Jockey Paco Lopez (Richard’s Boy): “I felt very comfortable. And the trainer said on the phone, ‘Paco, whatever you want, you’ll be in a good position. Second or third, the horse runs everywhere.' He’s a very nice horse, a very tough horse. I was on the right horse in the race.”

Jockey Trevor McCarthy (Ben’s Cat, 8th): “We broke well. It’s a shame it started raining. It got a little slick, and he doesn’t like the wet too much. We came away good, and he was slipping a little bit. I had to let him get his feet. He made a good run at the end when I asked him too. He galloped out well, so I was happy with him. It just seems like these first couple of races, he’s getting a bit unlucky. Age 11, for a horse to try, to keep running the way he is. I’m happy with him.”