Rich Strike has 'never been better' in Travers prep work 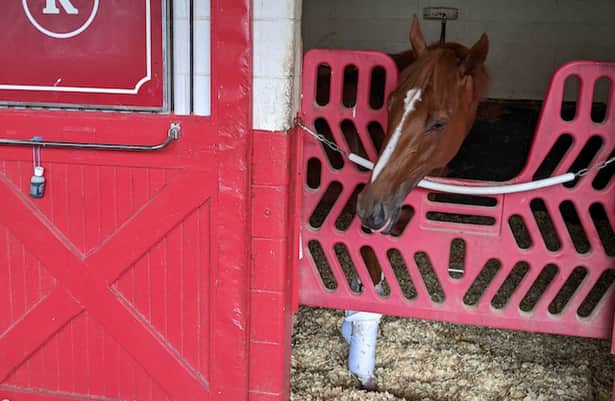 “If his blood work goes well Friday, he should ship to Saratoga on Sunday,” Reed said Wednesday morning after Rich Strike breezed at Churchill Downs in preparation for the Aug. 27 running of the Grade 1, $1.25 million Travers Stakes.

Partnered with regular exercise rider Gabriel Lagunes, the 80-1 winner of the Derby was clocked at 59.4 seconds going five furlongs on the fast main track at Churchill Downs. It was the second fastest of nine works Wednesday at the distance. Reed said Rich Strike galloped out to six furlongs at 1:13.4.

“He worked real good this morning in company with Common Bond,” Reed said. The stablemate also owned by Rick Dawson is a 4-year-old gelding who won a 1 1/4-mile allowance race last month at Ellis Park.

Rich Strike’s habit of wanting other horses to his outside was on display again during the workout.

“He started on the outside, and he wanted to go to inside as usual,” Reed said. “But he passed (Common Bond) on the turn and then finished up in hand. Gabriel said he has never been better.”

According to Equibase, it was the fifth timed workout for Rich Strike since his sixth-place finish in the Belmont Stakes on June 11.

Reed said he expected to breeze the 3-year-old Keen Ice colt at Saratoga next week.

With Sonny León coming back for the ride, Rich Strike will try to become the first Kentucky Derby victor to win the Travers since Street Sense in 2007.