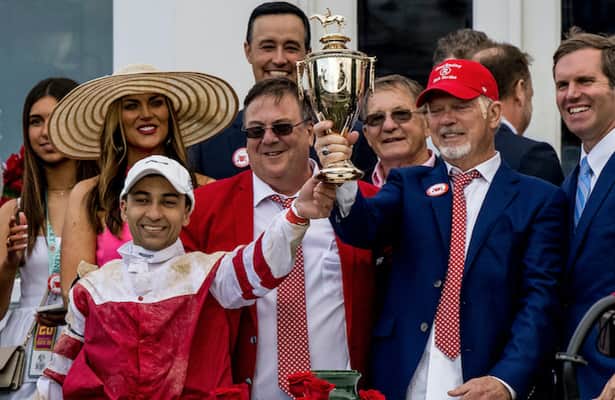 The owner and trainer of Rich Strike are calling for the Kentucky Horse Racing Commission to hold a hearing after a farrier admitted to stewards he ground the toe grabs off horseshoes he put on Hot Rod Charlie before the Oct. 1 running of the Grade 2 Lukas Classic at Churchill Downs.

In a texted statement co-signed by trainer Eric Reed on Saturday morning, owner Rick Dawson said he notified stewards “of (the) owner’s official request for a hearing to appeal the HISA decision. At this point I have requested my attorney that’s very familiar with the upcoming appeals process to go forward with this action and our pursuit of the truth.”

On Tuesday the Horseracing Integrity and Safety Authority ratified the KHRC stewards’ ruling that the shoes Hot Rod Charlie wore in winning the Lukas Classic were legal. Rich Strike finished second, losing by a head.

Dawson and Reed decided to go forward with their new appeal after hearing a recording of farrier Dean Balut telling KHRC stewards in an Oct. 7 teleconference that he ground off the illegal toe grabs from the front shoes that he put on Hot Rod Charlie on Aug. 30. He said he did so that day, more than a month before the Lukas Classic.

“The toe grab was grounded to flush,” said Balut, who was hired by Hot Rod Charlie’s trainer Doug O’Neill. Later in the call Balut told stewards, “What we did was ground the shoe, the toe grab, prior to coming to Kentucky to put the shoes on Charlie. So those shoes were completely flush at the toe with no toe grabs.”

The recording was provided by the KHRC on Friday in response to a Horse Racing Nation request for communications and reports under the Freedom of Information Act.

Reed brought the case to the attention of KHRC chief steward Barbara Borden on Oct. 4 after he received photographs from a trainer who did not have a horse in the Lukas Classic. Those images and others that have come to light since appeared to show Hot Rod Charlie had toe grabs on his front shoes.

“Team Rich Strike is of the opinion as is the opinion of a number of horsemen and a lot more horse fans that toe grabs are visible in many, many photos taken race day by award-winning photographers with great reputations,” the text from Dawson and Reed said.

The photographs were sent to Kentucky stewards, who also ordered two inspections of Hot Rod Charlie’s shoes in the days after the Lukas Classic. One was in the presence of a paralegal representative of the Lexington, Ky., law firm retained by HISA.

“After a thorough review of numerous photos … and the interview of farrier Dean Balut, the stewards have determined that there is sufficient evidence to confirm (Hot Rod Charlie) raced in compliance with HISA rule 2276 at Churchill Downs on Oct. 1, 2022,” Borden wrote in her Oct. 8 report that was endorsed Oct. 18 by HISA.

Now 5 1/2 months since Rich Strike famously scored an 80-1 upset in the Kentucky Derby, Dawson and Reed said they were not motivated by the possibility of getting an added $206,320 that was the difference between the $99,200 for finishing second and the $305,520 for winning the Lukas Classic.

“It’s not about the money for me,” Dawson said. “It’s about doing our part to clean up our sport should a violation occur. To be clear, we are not accusing anyone of any intentional cheating. However, it is very possible that a mistake was made, and a great horse, HRC, ran with illegal shoes.”

Even before the shoe matter arose, the Lukas Classic was steeped in controversy when Rich Strike’s rider Sonny León leaned hard in the deep stretch into jockey Tyler Gaffalione, who rode Hot Rod Charlie. León blamed it on a saddle that loosened on him. Even though KHRC stewards said that was plausible, they still suspended León for 15 racing days. The result of the race was not altered, since León did not keep Hot Rod Charlie from coming home first, and there were another 4 1/4 lengths back to third-place finisher King Fury.