Reed, Rich Strike regroup and look ahead at Lexington farm 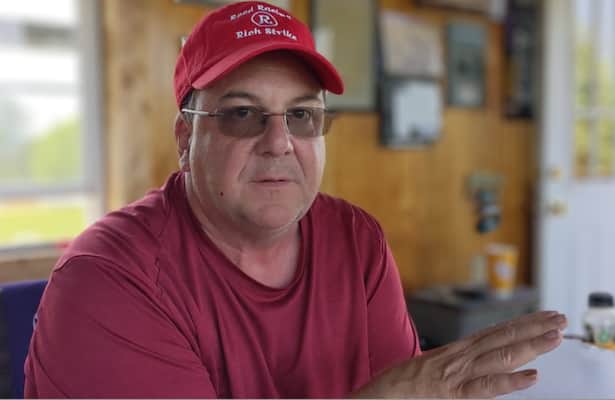 While his newly celebrated trainer was fielding questions from one visiting reporter after another, Kentucky Derby winner Rich Strike looked the picture of calm Tuesday afternoon.

The Mercury Equine Center, a well-tended, 50-acre farm just north of Interstate 64, is the home for America's newest four-legged star.

Far from the chaotic scene that was Churchill Downs on Saturday, the 3-year-old Keen Ice colt stood quietly at nap time, perhaps trying to figure out whether to lie down or to take in the conveyor belt of sudden human attention.

All the while, trainer Eric Reed, 57, sat a couple hundred yards away in a clocker’s stand that serves as his office near the farm’s training track.

Reed said Rich Strike probably will be back at the scene of his 80-1 triumph late this week.

“If I like the way things are going by Friday or Saturday, we’ll probably go to Churchill and maybe let him do a little three-eighths or something on Monday or Tuesday,” Reed said. “Just a little. Nothing hard. Just enough to take a little spunk that’s going to be there out of him. Not a real hard work at all.”

And if all goes well there, it is on to Baltimore for the Preakness Stakes on May 21. Reed figured of the three Triple Crown races, the middle jewel at Pimlico will be the toughest for “Richie.”

“Different stretch, different turns, different distance,” said Reed, who pointed out his closer would prefer a longer race and not a shorter one. “Less traffic for him is good, but that’s about the only positive.”

Reed knows that the early pace of the Preakness will not be as favorable as it was in the Derby. He also figured Epicenter, who finished second to Rich Strike on Saturday, will be back to try and avenge the loss.

“Epicenter should be the favorite again,” Reed said. “He ran his tail off in the Derby.”

Not expecting to be in the Derby let alone win it, Reed admitted he had to remap Rich Strike’s plan for the rest of the spring.

“Originally, we were going to go Derby-Belmont,” he said. “Now we’re rethinking things.”

One thing he will not change, however, is Rich Strike’s running style. Even if Epicenter and perhaps Wood Memorial (G2) runner-up Early Voting provide the only early speed, Reed promised that jockey Sonny León again would make a late run to try and win.

“Truthfully, you can’t change strategy,” Reed said. “He's a one-run horse, and he's got to have some help with the way that the race unfolds.

Maybe the Belmont would be different with the distance and the sweeping turns, but in any other race he’s got to have a little bit of pace. He’s got to have a good trip. So the Preakness is going to be real hard. But we can’t change strategy.”

Reed said he will try to maintain as normal a life as he can, although he admitted his telephone has been unusually busy the past three days. Especially with one conversation during the weekend.

“I got a call from President Trump while I was eating dinner Sunday night,” he said. “I spoke to him for about 15 minutes. And so that’s a big deal.”

“I am going fishing,” he said.