Rice: With Max Player, 'we're going to take our best shot' in Belmont 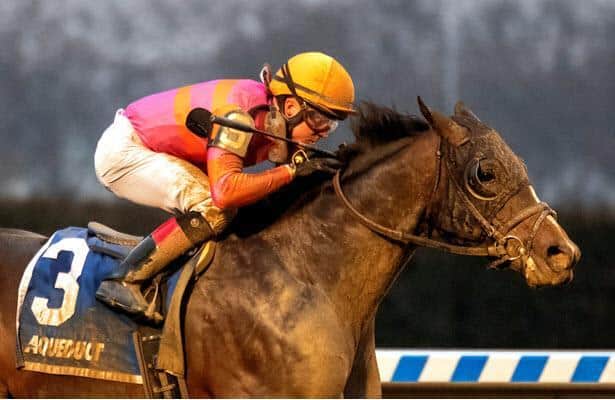 Max Player will be trainer Linda Rice's first Belmont Stakes entrant since Supervisor finished fifth in 2003. His owner, George E. Hall, has enjoyed success in the Classic, with Ruler On Ice capturing the 2011 edition.

"He went the first three-eighths in 36.3 and I instructed Oscar to ask him to finish a little bit from the sixteenth pole through the wire," said Rice. "We did the same thing 10 days ago and we just wanted to let him stretch out a little bit on the main track. He went 59.3 and out in 1:12.1 for three-quarters. It seems fast, but the clockers told me the track is very fast today. He went very well."

Max Player closed to finish second on debut in November at Parx in a one-mile maiden and graduated at second asking on December 17 over a sloppy Parx surface ahead of his Withers win.

Rice said Max Player has matured mentally and physically heading into the biggest race of his career.

"He's grown up a lot," said Rice. "He's changed tremendously since he was a 2-year-old. He ran at Parx twice and was very green then. We used to breeze him in company to get him focused and at this point he's changed a lot mentally and physically."

Max Player is currently 32nd on the Kentucky Derby leaderboard with 10 points and will look to add to those totals in the Belmont Stakes, offering 150-60-30-15 Derby qualifying points to the top-four finishers.

The talented Honor Code colt has now breezed 11 times since winning the nine-furlong, two-turn Grade 3 Withers last out on February 1 at the Big A. Rice said she has taken great care to ensure Max Player has the foundation to be successful in the Belmont.

"He hasn't run in five months and I had spaced his works out every two weeks during the pandemic, having no target in sight and not knowing what we were pointing towards," said Rice. "This last month, I've given him three breezes, ten days apart, and I was very pleased with his last two works on the main track."

A talented Belmont Stakes field will include Grade 1 winners Basin and expected race favorite Tiz the Law, but Rice said she is confident in her colt's readiness for the one-turn nine-furlong test in the Belmont.

"We know he can run a mile and an eighth. He did that in the Withers in February and he's made a lot of strides forward since then," said Rice. "I'm not concerned about the distance at all, it's just a matter of the competition. Tiz the Law is a very formidable horse, but we're going to take our best shot."