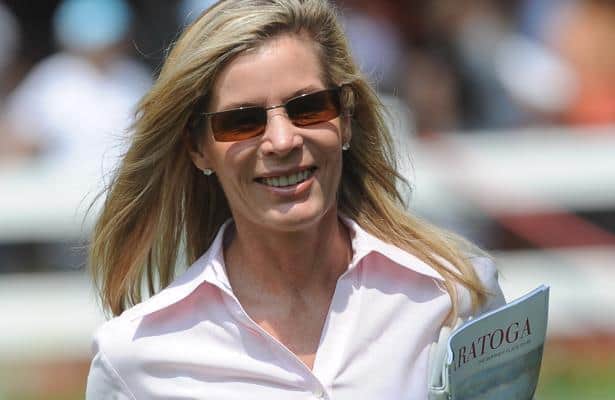 When Linda Rice was 17 and she told her father, Clyde, of her ambition to follow in his footsteps by becoming a trainer, his reply said much about the industry and the world at that time.

After two years of studying computer science at Penn State, she decided that life behind a laptop was definitely not for her. And while her career as a third-generation trainer has not been easy, it has been filled with accomplishment.

She also holds the distinction of becoming the first woman to win a training title on a major circuit when she edged Todd Pletcher, 20-19, at Saratoga Race Course in the summer of 2009. Enhancing the accomplishment, she sent out 75 starters to 135 for Pletcher’s powerhouse operation.

Rice, 56, could take another huge step forward by becoming the first woman to train the winner of a Triple Crown race if Max Player pulls an upset in Saturday’s Belmont Stakes. Like everything leading up to what would be a career-building triumph, it will be anything but easy.

No graded stakes-winning 3-year-old has arguably been more deeply impacted by the pandemic than the lightly raced son of Honor Code, last seen capturing the Feb. 1 Withers (G3) by an auspicious 3 1/4 lengths at Aqueduct in only his third career start.

After the Withers, Rice and owners George Hall and SportBLX Thoroughbreds circled the April 4 Wood Memorial at the same track. That, of course, was not to be when New York, faced with myriad issues, became the epicenter for COVID-19.

They debated whether to run in the May 2 Arkansas Derby, which attracted so many starters it was run in two divisions, and decided against that.

“To get to Arkansas from New York is a very long van ride and it was going to have to be a van,” Rice said. “I knew that (Bob) Baffert was bringing two very tough horses with him, not to mention that the entire 3-year-old crop was going to be running in Arkansas. We just didn’t think it made sense to travel that far for a race that was going to be that tough.”

Baffert indeed secured both divisions, with Charlatan and Nadal. Charlatan is now sidelined through the Sept. 5 Kentucky Derby with an injury, though. Nadal was retired with a condylar fracture, underscoring how brutal the game can be for all trainers, regardless of gender.

Rice and Hall then pondered the May 23 Matt Winn Stakes (G3) at Churchill Downs. “Once again, I didn’t see a point in traveling our horse and wearing him out to run him against Maxfield for $150,000,” Rice said. Maxfield prevailed in the Matt Winn as she anticipated before he, too, was hurt.

Max Player is set to give Rice her first Belmont starter since Supervisor ran fifth in 2003. She admits she wishes the preparation could have been different for what has turned into the opening leg of the Triple Crown and will be run as a one-turn, 1 1/8-mile contest rather than the traditional 1 1/2-mile marathon.

“Ideally, we’d love to have a prep coming into this,” she said. “But we are where we are. He’s training very well, and we’re excited about running him.”

Max Player took second in his Nov. 12 debut at Parx Racing before improving in his next start there to draw off by 4 1/4 lengths on Dec. 17. He struggled with kickback, leading jockey Dylan Davis to give him a wide trip in the 1 1/8-mile Withers. Still, he easily turned back Shotski, yet another sophomore off the Triple Crown trail. Shotski has what was described as minor bone bruising.

Rice emphasized that she and Hall are taking a long view in managing Max Player, an April 28 foal, the way they have. “We felt there would be a lot of races ahead of us and we didn’t want to travel our horse and wear him out before all of these opportunities showed up,” she said.

And so Max Player, who ranks 32nd with 10 Kentucky Derby qualifying points, breezed six furlongs in a sharp 1:12.25 seconds one week before the Belmont Stakes. It represented his 11th breeze since the Withers as he prepares to confront Florida Derby champ Tiz the Law and other more accomplished members of his class.

Although history does not appear to be at hand for Rice, who knows what else may unfold in what already has been a season no one could have scripted?