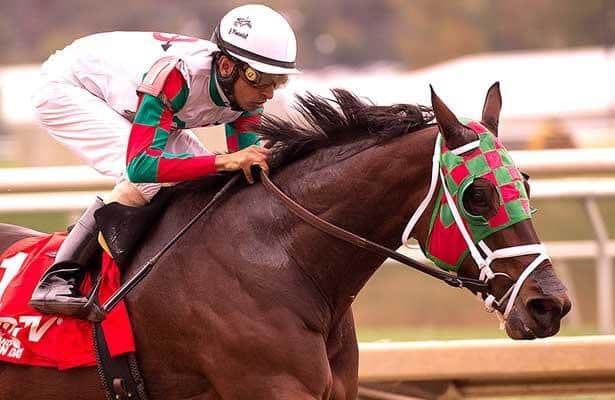 Last March, Ribo Bobo was claimed for $6,250 out of a Gulfstream victory by trainer Jason Servis for Mr. Amore Stable. He won six of his seven subsequent outings for that operation and made a triumphant return to Florida last out as the odds-on favorite in the Claiming Crown Express Stakes on December 7.

Come Saturday, Ribo Bobo will attempt to complete his transformation in the $150,000 Sunshine Millions Sprint.

“He’s been doing great,” Servis said. “I’m taking it race by race with him. I just try to stay out of his way.”

Ribo Bobo’s winning streak included wins in the Icecapade Stakes at Monmouth on September 2 and the Maryland Million Sprint on October 19. The son of Louis Quatorze usually leads at every call, but Servis said his charge is tractable.

“He can run any way; he can come from off the pace, like when he won the stakes at Monmouth, or he can be on the lead,” Servis pointed out. “There’s no pressure for him to run a certain way. He’s in good shape.”

Paco Lopez, who has ridden the gelding in his last two outings, will be in the irons once again on Saturday.

Star Harbour finished fifth in the Sunshine Millions Sprint 12 months ago, but was offered for $35,000 at Saratoga on August 29 and has proven to be an excellent claim. After finishing third to the ill-fated Caixa Eletronica in Belmont’s Duck Dance Stakes on October 6, the bay horse defeated Jackson Bend and Bahamian Squall in the Sunshine State Stakes at Gulfstream on December 8. Trainer Bobby Dibona originally intended to await this contest, but called an audible to run Star Harbour in the Mr. Prospector Stakes (G3) on December 28. After setting a contested pace, Star Harbour couldn’t withstand Singanothersong and Fort Loudon, and wound up third as the 6-5 favorite.

“I’ve got to give the winner a lot of credit, because he looks like he’s going to be a nice horse,” Dibona said. “The track was a little funny and it was drying out a bit. But he ran big. We’ll just have to see if we can turn it around. We’re back on short rest and changing the plans a little bit. Sometimes it works and sometimes it doesn’t. I don’t have any regrets trying the [Mr. Prospector]. I thought he ran well.”

Star Harbour has been a bit of a project for Dibona.

“He has bad feet, so we pay a lot of attention to that,” Dibona continued. “He used to run in bar shoes. He also has maybe a lighter regimen than he was accustomed to.”

Star Harbour will be ridden by Joel Rosario for the first time in the Sprint. He will break from post seven.

Trainer Stanley Gold has entered a pair of Jacks or Better Farm homebreds in the six-furlong Sprint. Grande Shores drew post two and will be piloted by Edgard Zayas, while Fort Loudon has the five hole and jockey Jeffrey Sanchez.

Black Diamond Cat and Apriority finished fourth and sixth, respectively, in the Mr. Prospector. Edgar Prado will have the mount on Black Diamond Cat, while Luis Saez will take back the reins on Apriority.

The Sprint field is completed by Happy My Way, Bear Tough Tiger and Close It Out.

My Pal Chrisy Returns To Sprint With Sweet N Discreet

The $150,000 Filly & Mare Sprint at six furlongs drew a field of seven including Sweet N Discreet, who was cross-entered in the $300,000 Distaff by 10-time defending Gulfstream meet champion trainer Todd Pletcher.

A 4-year-old daughter of Discreet Cat, Sweet N Discreet had her two race win streak snapped in her last start, the $100,000 Ocala at Gulfstream on Dec. 29, which marked her stakes debut. In that race, she took the lead after six furlongs and carried it into the stretch before tiring to second, beaten two lengths.

My Pal Chrisy, who finished third in the Ocala a head behind Sweet N Discreet, returns to sprints where the 6-year-old mare has won five of nine career starts at six furlongs, and is 3-for-10 at Gulfstream including back-to-back wins in the Musical Romance and Sunshine Millions Distaff Preview last fall.

Ullapool has won three straight races dating back to an entry-level allowance at Belmont Park in September 2012. She has started just twice since, going gate to wire to win an optional claiming allowance at Belmont on Oct. 17 and the Garland of Roses at Aqueduct on Dec. 7.

Classic Point, trained by Hall of Famer Allen Jerkens, is 3-for-9 lifetime at six furlongs. Beaten a neck in the Honorable Miss (G2), she was fifth by two lengths in the Ballerina (G1), both last summer at Saratoga.